Why did I watch Big Momma's House 2? 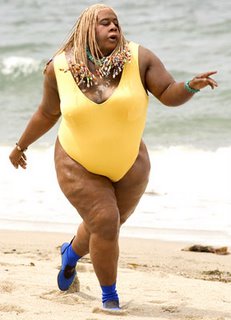 Do not believe what everyone else said, Big Momma's House 2 is absolutely a necessary sequel. There is a need to see Martin Lawrence going around dressing up like a fat woman again, and then bonding with three children in your typical Hollywood manufactured warmhearted scenes that are similar to the gazillions (pardon me, but what is bigger than gazillion? Bazillion?) of inoffensive family films out there. There is a need to see Big Momma in a bathing suit to understand the true concept of being grossed out (yeah, look at left pic to suffer what I suffered).

Six years have passed since Big Momma's House 1, but I am sure absolutely everyone's hungry for this sequel, since it did make 28 million during its first weekend in the United States despite everyone pretending to complain about it before its release. And hey, I'm sure we are always craving for films about poor misfits teaching seemingly rich but emotionally lacking people what is it like to be a family. Hey, having a somewhat good intentioned family comedy is good for families, right? Good to strengthen family ties. Yeap. Maybe it'll work for kids, or people in their early teens, but if this is a film meant to appeal to the masses, then the crowd it will entertain will most probably be pretty small.

Here's the plot: Malcolm (Martin Lawrence) now works for the FBI. Going undercover as a nanny to infiltrate the home of a computer designer who is suspected of designing softwares enabling baddies to hack into government files. And yes, he ends up bonding with said computer designer's family, and helps them fends off those bullying baddies.

Yes, the plot is very unimaginative. But why did I say that this film is entirely necessary? Because I think this is a fine testament of Hollywood's laziness when it comes to churning out films like this just to milk some extra cash. If they are that desperate to stick with the same formula everyone else has been doing, why can't they just try doing something to improve upon the film and let it transcend whatever low expectations and condemnations everyone has piled upon it before it's even released? Why can't they just do a family film that's not just occasionally amusing, but can at least impress people more? It's probably not going to make more than 100 million (it has currently made 54 million three weeks after its release, and weekly grosses continue to fall drastically) And they are complaining about theater attendances declining.

Hey, it's not as if the cast members aren't trying hard, hey, come on, I doubt Martin Lawrence's fat suit is comfortable, but after seeing the movie, I just can't help but feel that they have wasted their efforts. I'm not a highbrow reviewer who goes around condemning movies like this that doesn't fit their highbrow tastes, I'm just a regular guy wanting to be entertained, and thus I didn't expect this to be high art, but I'm rather disappointed that this film can't be more entertaining.