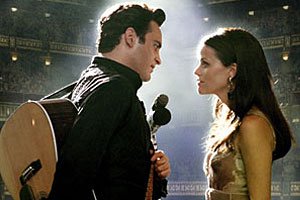 I am rather ignorant to the details of Johnny Cash (and June Carter)'s history, and I don't remember ever listening to any of his songs before (well, I might heard some when my dad was playing it, but I don't think dad was that into Johnny Cash either), thus I can only evaluate the biopic based on whether it could hold the attention of any viewer who does not know anything about its subject. After all, I'm not anal when it comes to judging the factual accuracy of biopics (I can never understand why some people like condemning biopics that much just because they aren't accurate enough, yeah, I'm looking at those who complained about 'A Beautiful Mind' not examining John Nash's homosexual tendencies), it's more about whether it 'works' for me as a film.

When watching the first half an hour of Walk The Line, I was struck by how similar it was to 2004's Ray, or the 2005 Elvis miniseries, yet when it went on, I realized that this was one of those biopics that focus only on a particular segment of the subject's life. In Walk The Line's case, it is about the rise and fall and then rise of an American musical icon, his strained relationship with his father, and ultimately, the wondrous love story between Johnny Cash (Joaquin Phoenix) and June Carter (Reese Witherspoon). And it is the romance that elevates the film, making it better (in my opinion) than Ray, which was a good film too, but somewhat draggy at parts and bloated with its overwhelming number of characters and subplots. Walk The Line feels like a leaner film, and despite not knowing anything about Johnny Cash, manages to enthrall me with its great acting and, again, the romance, which is seriously one of the sweetest I've ever seen in a biopic (hence my recommendation as a Valentine's Day flick to watch). And like all good biopics, it filled me with curiosity and interest for its subject once it had ended.

The Johnny Cash portrayed in the film is not glorified like a deity. After shooting into fame with the single Cry Cry Cry and being in successful tours (some were with legendary figures like Elvis Presley and Jerry Lee Lewis, whose lives briefly intersected with his), he was cocky, arrogant and prone to violence (after getting into his drug problems), and wasn't very nice to his first wife (Gennifer Goodwin) and daughters. Yet his life was turned upside down when he fell in love with June Carter, though it wasn't one-sided, their forbidden love (forbidden because at some point of the time, she was married, or had just gone through messy divorces that had her being vilified by the more conservative groups) for each other can only be expressed subtly onstage, when they were playfully flirting with each other during performances. His drug addiction almost destroyed his career, but he managed to get over it with the assistance of June and her parents. Like what he said in a scene, June was like an angel to him, and it was unsurprising why he would spend nearly ten years trying to win her heart.

Joaquin Phoenix and Reese Witherspoon are deserving of the accolades they have gotten for their performances in the film. Placed in the hands of lesser actors and this film would never have been half as emotional. While Joaquin is unlikely to win the Oscars (I always liked him as an actor, from the Yards to Gladiator, and hell, I thought he was the best thing in Signs, and that The Village would've sucked more if he weren't in it), I will make my bold Oscar prediction right now that Reese will most definitely win it (her closest competitor is Felicity Huffman in Transamerica, but she is hampered by the fact that the film she's in has only one Oscar nomination). After languishing in numerous (besides Legally Blonde 2, the rest aren't entirely bad) romantic comedies, I am almost surprised by Reese Witherspoon's multi-nuanced dramatic performance here. To me, the best romances are the ones where you want to root for the main protagonists to be together regardless of their character flaws, that you will feel the anguish of the characters or the yearning they have for one another without being told to do so by some unconvincing manufactured scenes or plot device (although I AM a sucker for these). And this can only work with great acting and great chemistry. But other than these two, I think Robert 'T-1000' Patrick's pretty good as Johnny Cash's dad too.

So yes, fans of Johnny Cash will probably love the film, people interested in trying to know about Johnny Cash should check this out too, but even if you don't really care that much about the Man In Black, this is a pretty good film and a really sweet love story.

Oh, and brief history of Johnny Cash can be viewed here.
Film Reviews