Watching 'Just Like Heaven' alone, the day after Valentine's Day 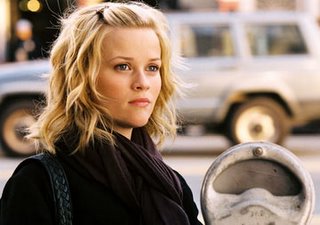 I watched my DVD of 'Just Like Heaven' a day after Valentine's Day, early in the morning, when I had just struggled out of bed, and was desperate to warm my frozen heart with a cheerful romantic comedy (I spent Valentine's Day alone, doing nothing but write a poem for someone who was rather far away), and any long-time readers of this site should know by now, I am a sucker for romantic comedies, and knew pretty well that this is a film that will most likely cheer myself up.

Yet there is one thing I have to say about supernatural romances, with the exception of Ghost (... okay, maybe there's Corpse Bride too), I don't recall any other major human/ghost romances from Hollywood that actually leave a deep impression, much unlike Hong Kong, when during the 80s and early 90s where films from this particular genre were everywhere, and pretty much regarded as classics of their own (Chinese Ghost Story, Happy Ghost, My Wife Is A Ghost, and countless other Hong Kong films which English titles I don't know come into mind. Hell, I even recommended 'My Left Eye Sees Ghost' as one of the perfect HK Valentine's Day films), perhaps it has to do with the fact that in Hong Kong, these supposed romantic comedies which started out wacky and crazy would usually become poignant and bittersweet, where we audiences can't help but lament the fact that regardless of how hard they try, our protagonists will never overcome such a major obstacle of one being actually dead, where the ending is usually never entirely happy, with the ghost heading off for reincarnation, and the hero seeking solace from meeting someone who looked entirely like the ghost (damn I hate cop-out endings like that).

By not giving too much of this particular film, I will just say that Just Like Heaven is a much harmless and fluffy film without much poignancy (well, at least not as poignant as its Hong Kong counterparts). It's pretty much a high concept romantic comedy like 13 Going To 30, which works like most romantic comedies, except more gimmicky. The gimmick of this film, long revealed by this film's trailer, is that Elizabeth's (Reese Witherspoon) a ghost, but like the ghosts in Sixth Sense, she didn't even know that she's a ghost, she was just a hardworking young doctor who got into a horrible car accident. David (Mark Ruffalo) is a depressed dude (whose reason of depression will not be revealed in this film) who rented Elizabeth's apartment after her accident, only to be haunted by him.

Initially freaked out by this meddlesome, control-freak of a ghost, he, like all protagonists of romantic comedies, gradually fell in love with her. But how can things work between those two when one of them happens to be a ghost? Unfortunately, I had already revealed much of this film in one of the paragraphs above.

Mark Ruffalo, who seems to be in most romantic comedies these days as the chick's love interest (he tends to appear in films that usually serve as a star vehicle for the female star) is likable as the main guy, while Reese Witherspoon is once again, well, Reese Witherspoon in a romantic comedy. (you won't see her displaying the sublime Oscar-nominated acting skills she did in Walk The Line in this much lighthearted fare) And Jon Heder, in his first role since Napoleon Dynamite (since seeing this film, I've been trying to convince everyone that Ligers do exist), is here too! Albeit in a very minor role with barely more than two or three scenes (despite the trailer trying to convince us otherwise). Jon Heder's funny here, but then, his role as a spiritualist is not something someone can screw up easily anyway, I won't mind seeing him in much complicated roles, and I'm rather surprised to see that he ain't actually an ugly guy after all (... this sounds wrong). Director Mark Waters was responsible for Mean Girls, a film I hold fondly in memory more because of whom I was watching it with than because of the film itself, who had managed to make a nice-looking film (it's flooded by beautiful sunlight, nice scenic view of San Francisco etc), and viewing some deleted scenes in the film, I noticed that he actually managed to avoid some mistakes other directors who have made with such a film (a scene where Elizabeth was flying around a park was thankfully excised, along with a scene where hero was tearfully voicing how much he missed the absent heroine to his best bud)

There is not much I can say about this film. Fans of romantic comedies will enjoy it even though this film has a rather disappointing ending (it was draggy for no apparent reason at all than for us to see a generic rom-com type scene where the hero and heroine are angsting and longing for each other). But other than that, it doesn't break new ground, nor blow anyone away, it's just an average movie that's only for entertainment.