Combien tu m'aimes? (How Much Do You Love Me?) starring Monica Bellucci 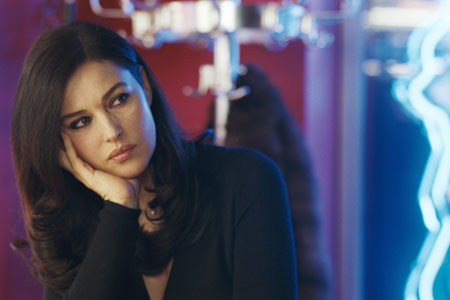 I've long wanted to see this film. In fact, my first attempt to see 'Combien tu m'aimes?' (aka 'How Much Do You Love Me?') occurred way back on the 11th of April, during the French Film Festival held in Perth. I was tremendously excited, I dragged Justin with me to see it just hours before the Sigur Ros concert (the concert rocked, go read Justin and my reports here), but unfortunately, tickets were all sold out.

It wasn't surprising, considering that this film has Monica Bellucci in it. And yes, she's the sole reason why I wanted to see it (what else could it be?).

Then, for two months I waited for the film's regular theatrical run in Perth, a poster of the film pasted on my wall serving as reminder. After completing my short film, Vertical Distance, I blitzed immediately to the cinemas, dragging a lady friend with me. I barely knew a damn thing about the film (besides Monica Bellucci and Gerard Depardieu being in it), and hoped that this would make the viewing more enjoyable.

I used the word 'kinda', because I'm not entirely sure whether it truly sucked or not. Could it be possible that French culture is so alien to me that I was incapable of understanding their humour? After all, perhaps my reaction would be similar to how a Westerner would react after watching an early Stephen Chow 'mo lei tou' (nonsense-style) comedy. Or something from Hong Kong director Wong Jing. Befuddlement, bewilderment, and a slight sense of annoyance and emptiness. "What the hell just happened?" was what I said to my lady friend once the credits started rolling, because this French farcical comedy had totally lost me during its last twenty minutes. 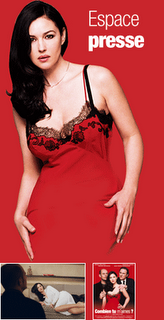 The film started out like a twisted version of Pretty Woman, a regular joe, Francois (Bernard Campan) had just won millions in the lottery, so he hired smokingly hot prostitute Daniela (Monica Bellucci) to live with him at his place until his fortune would run out. While he had won her services with his money, can he win her heart in the end? Aw. Complications occurred when Daniela's boyfriend/husband (I'm not sure which) Charly (Gerard Depardieu), a triad boss was involved in the fray. And can Francois, who has a weak heart, survive the presence of such a smokingly hot domestic goddess + the intense non-stop sex + the rich food cooked by Daniela, an Italian? This film has an opera-type soundtrack (which I didn't notice much until I read the numerous reviews of this film), lighting and costumes that were entirely inconsistent, to the point where I couldn't tell whether it was a stylistic choice, or that the director actually sucked at the most basic techniques of filmmaking.

Whatever it was, the film and its sheer randomness totally left me shaking my head in disbelief. Even the eye candy (and there were plenty of them...) provided by Monica Bellucci could only serve as mild diversions, before I became confused again. I seriously had no idea which parts should be taken seriously and which parts were meant to be funny. Many times throughout the film I was amused, and there was this monologue delivered by a doctor about his tormented love for a dying nurse that was so heartwrenching that it seemed as if it should be in another film. But that was it, a few bright spots in an otherwise messy nonsensical little film. Perhaps the ending was meant to be ambiguous, which managed to spawn forth just some interesting theories at the message boards of IMDB. But other than that, I was annoyed, the film felt just like Return of the King, it seemed as if it had ended, but it hasn't, as a scene that seemingly felt like a closure was 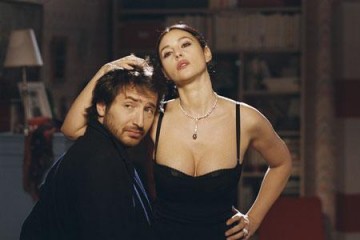 Or maybe director Bertrand Blier is a fan of HK director Wong Jing, and shares the latter's disdain towards arthouse fares (Wong Jing is known for his running feud against Wong Kar Wai, constantly throwing thinly-veiled insults at WKW during awards ceremonies and perpetually lampooning WKW's works and stuff), thus he made a trash film and packaged it like an art film. Ah well, no, don't watch this film. Even if you are a hardcore Monica Bellucci fan, and you are desperate to see her naked, there are still many other better films with her in it.