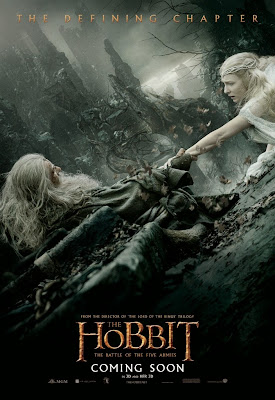 Because of my love for the Lord of the Rings trilogy (to me, it was the Star Wars of my generation), and the conclusion of The Hobbit has marked the end of a particular moviegoing chapter of my life (... unless The Silmarillion gets adapted too), I decided to post my thoughts on The Hobbit: The Battle of Five Armies on Facebook.

On Christmas day, I went to catch The Hobbit: The Battle of Five Armies. The final film of the Hobbit trilogy. Sitting through the film, with a state of numbness, my constant thought then was "Am I getting too old for this?".

Back when the original Lord of the Rings trilogy came out, I was so in love with each of them that I would watch them twice at the cinemas, in consecutive days ("This film is awesome! I'm coming back for this tomorrow with other people!") Even went through the LoTR marathon in 2003 to catch the opening of Return of the King. These films were the Star Wars of my generation.

From its announcement, I had feared that the Hobbit films were going to be the Star Wars Prequels. I thought the first half of the first Hobbit film was disappointing, but felt that it became pretty good when things picked up in the second half. And the riddle game between Bilbo and Gollum is quite a joy to watch.
I think the second film, Hobbit: The Desolation of Smaug, is probably the best. The action scenes were thrilling, that dragon set piece was pretty spectacular, and the pacing was tight and effective. I liked seeing the return of the badass Legolas (who does look older and rounder than he was in the LoTR) who gets constantly friendzoned by the girl he likes because of the one and (conveniently) only handsome dwarf in the group. Perhaps I was enjoying some of the two with a dash of irony, like I did with the old LoTR films. As good as the old LoTR films were, I was always finding little things of the films that would amuse me. Like pretending that Frodo's a girl.

This brings me back to Hobbit: Battle of Five Armies, which, even if I was watching with irony, was too much for me to handle. What's with the overbearing Twilight-esque love triangle? Which gave us gems like... ("If this is love, I do not want it. Take it from me, please! Why does it hurt so much?" "Because it was real.")

Or the very 80s way for Thorin to "deal" with his "dragon sickness". (I was hoping for something more psychedelic, or Black Swan-ish)

The war scenes in LoTR were visual spectacles that I have never ever seen before (or again). There was always a fine mixture of the intimate and the epic, where you could see the main characters you care for participating in the fight, and feeling thrilled and excited by what they do. With the Hobbit... even with the 3rd film, I realized I couldn't remember a single dwarf's name, aside from Thorin's. Yup, I kid you not, not even the handsome beardless dwarf (Kili, I breathed a sigh of relief when his name was called out in his first scene)

I was having trouble following the battles, or the characters. Hence the "Whoa, whoa there, am I getting too old for this?" It's a depressing thought to have when watching a blockbuster film meant for the family.