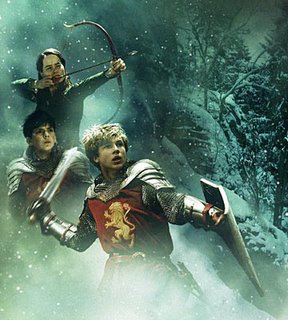 Edmund Pervensie had always been one of my favourite literary characters during my childhood. Perhaps it had to do with the fact that we share the same name, but when I first read the Narnia books back when I was 12, I was always annoyed by the entire 'goody-two-shoe'/ holier-than-thou/ sanctimonious attitude adopted by most of the protagonists. Aslan and the two elder Pervensie children had always been flat and lifeless, but Edmund was different, like normal humans, he possessed personal desires, dark emotions and such, obviously, I could relate more to him than to the others.

So, almost a decade had passed, and he, along with Aslan (of course), remained the only characters I could remember from Narnia. 'Edmund The Traitor', 'Edmund The Backstabbing Bastard' were the names I fondly remember him as. After all, if I were surrounded by annoyingly holy and patronizing siblings like he did, I would be pissed too.

I went into 'The Chronicles of Narnia: The Lion, The Witch and The Wardrobe' wondering whether it would generate the same sort of emotions I had felt when I read the book all those years ago. Annoyance at Aslan and the elder Pervensie children, fascination of Edmund the Traitor, indifference to Lucy. Not that I intend to compare the film with its source material, since it is something I consider rather unfair to do. A film should be enjoyed, appreciated and judged for what it is, not whether it is a faithful adaptation of its original material or not (hence why I tend to enjoy Harry Potter films more than most hardcore Harry Potter book fans).

To a lesser extent, yeah.

Peter and Susan were annoyingly patronizing, but not as bad as I remembered. Edmund the Traitor was traitorous, but not as fascinating as I've remembered, Lucy was creepy and cute at the same time. Aslan, the fact that he didn't preach that much made me appreciate him more in the film. Ah, what have I done? I have just contradicted what I said and compared the film characters with their literary counterparts. A no-no.

Perhaps I've been pampered by King Kong. So blown away by the film in Christmas that I ended up feeling somewhat underwhelmed during the middling sections of 'Narnia'. However, the last thirty minutes of the film, after a major character sacrificed himself, it became from 'somewhat decent and nice' to 'pretty good'.

So yeah, Narnia is a very good film, I can't deny that. Not mindblowingly awesome like I have expected, and whether it will be in the year's top ten list of mine remains to be seen, but it is a visual spectacle. And rather likable. It is, after all, a simple tale:

Four children stumbled into a fantasy world, got sucked into a major war, and ended up becoming war heroes. Oh, and Santa Claus makes a cameo.

I couldn't get too immersed into the film due to certain elements of it (the rather slow pace in the middle section and the fact that the characters, yes, even Edmund the Traitor, weren't really THAT interesting), but when everything exploded into the climax near the end, and you get to see how they became heroes (suspension of belief is required, obviously, otherwise you'll be spending your time questioning how a bunch of kids could actually lead an army so efficiently), things became much more interesting.

This film wasn't really aiming to be the next Lord of the Rings (an unfair comparison, really), thus it's unnecessary to have such high expectations of it. I enjoyed it, and I won't mind seeing more Narnia films in the future (although I feel that 'The Magician's Nephew', which is about the creation of Narnia, is pretty unfilmable, even if it does become a film, I doubt it'll be that interesting). However, Narnia made me look MORE forward to the film adaptations of Philip Pullman's His Dark Materials trilogy. But that's another story.

Oh, and the White Witch (Tilda Swinton) was badass in the action scenes.