Remember Jumanji? I remembered liking it when I saw it ten years ago. I even had the laser disc (that was before the time of DVDs) and watched it numerous times. Never failed to like it. Robin Williams and Bonnie Hunt were funny. And Kirsten Dunst was, well, young. 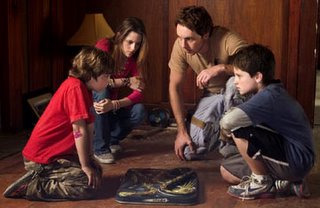 And Jumanji was the sole reason I went to see Zathura (both were based on books by the same author, and I believe Zathura was supposedly an unrelated sequel). All right, it did get some solid reviews at Rotten Tomatoes too.

Summary? Two bickering siblings find a board game at the basement of their house while their dad (Tim Robbins) is out for work. Then when they start playing, their entire freaking house is launched sent into space, and they meet scary aliens, killer robots and mysterious stranded astronauts. Things can only revert to normal if they can finish the board game, but can they put aside their differences and do so?

This is a decent and simple film. Just imagine Jumanji in space, but less complications and subplots, or probably less budget too. Basically, the film's centered around the relationship between the two brothers, and the child actors did pretty well in here, with the continuous argument and their intense rivalry. I won't really bother watching it twice (like I did with Jumanji, but then, I might have liked Jumanji that much due to my age back then), but it does have a nice little twist in the end.