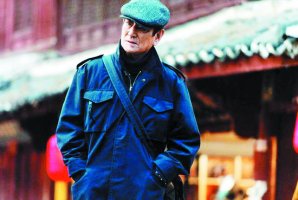 I saw this film in Shanghai on the 22nd of December, the day of its release. And I think it's going to flop badly in the box-office... considering the fact that MY DAD AND I WERE THE ONLY ONES SEEING THIS FILM IN THE CINEMA!

And so, there we were, father and son, seeing a film about father and son bonding. I'm generally okay with most Zhang Yimou pre-'Hero' flicks, Not One Less, Happy Times, To Live etc. They are all good films. Unfortunately, RIDING ALONE FOR THOUSAND OF MILES is a disappointment.

The film begins in Japan, an elderly fisherman returns to Tokyo to find his estranged son suffering from terminal illness. After watching a video footage filmed in China by his son, where he (the son) voices out his interest in Chinese opera to this opera singer, the old dude decides to go to China and film a Chinese opera for his son to mend the relationship that was ruined years ago. It could've been a good and moving film, but it fell flat. The son remains off-screen throughout the entire film (you never see his face), thus everything becomes more of a one-sided affair for the dad, it's all about his guilt and his desperation to know more about his son from the Chinese people his son had befriended.

But things were just too generic, predictable and worst of all, manipulative. There are scenes which have groups of grown men weeping like bitches for the sake of hoping that audiences would weep like bitches too. But for crap's sake, what they wept for was so inane and illogical that I ended up shaking my head in disbelief. I won't say that this film sucks, but it's a minor Zhang Yimou film.
Email Post
Labels: Film Reviews Zhang Yimou