- December 26, 2005
Saw King Kong yesterday on Christmas. I agree with Roger Ebert's review (and most other US critics'). This film is pretty great.

I had my doubts with the film when I first saw the trailer (the one that came with 'War of the Worlds'). It looked nothing more than some generic loud, special-effects heavy blockbuster. If it weren't directed by Peter Jackson, I wouldn't even have ANY EXPECTATIONS of the film AT ALL.

(After all, we all know the story, filmmaker and his crew found big ass gorilla, took him back to New York, big ass gorilla escaped, climbed onto Empire State Building with screaming woman. Big ass gorilla got shot, and fell to his death. The end. Baboom. Yawn.)

I'll never, EVER, doubt Peter Jackson again. My god, what a mindblowing job he had done with King Kong.

"What do you think?" My friend, Sebastian, asked after we finished the film.

"Spectacular." I said. I couldn't think of any other words to describe it.

Yes, it was a bit too long. And yes, like Sebastian said, there were too many longing looks between King Kong and Ann (a splendid Naomi Watts who made the forgettable Ring 2 entirely forgotten. She is forgiven), but still, it was dramatic. The film's an epic masterpiece. 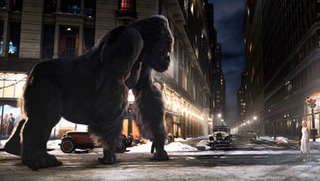 Everything in it works, the drama, the action, the thrills, the romance etc. The characters here are people you care for, even if they aren't, you'll still feel that they are real people, something you seldom feel in most big-budget Hollywood films. I'm not going to analyze each and every single actor and tell you how I feel about their acting, after what I said in the previous sentence, you should know already.

The major action scenes were just insane. The ones in Skull island. King Kong vs the three T.Rexes, the stampeding Brontosauruses, those icky slimy thingies that appeared after the stampede. I was already 'whoa'ing at them (something I've ceased doing these days). And the ones in the beautiful 1930s New York. To see King Kong running around, jumping from one skyscraper to another, him breaking things up, wrecking cars, tearing buildings apart, I was STUNNED! BLOWN AWAY!

But like I said, it's not just about the action. It's dramatic and poetic too. It's totally Oscar material. (Although I wonder whether it'll have any chance based on its Golden Globe snub. It should, since it's winning quite a number of awards from those US critics associations)

Argh, enough with it. Go see this film now.

Oh, and the trailer doesn't do the film justice. Many of the less than impressive looking parts in the trailer aren't actually in the film itself.