Some Dystopian Tale Part 1: The Political Activist And His Murderous Little Birds 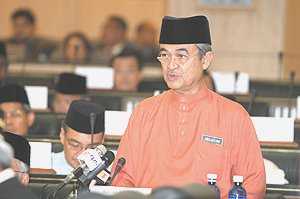 The internet went down with a mighty crash. The silence that followed was deafening.

I know, I needed a better opening line than that, but give me a break, the entire world changed on that fateful day, I just can't come up with anything dramatic to describe the events. I'll leave it to the journalists, I'm sure they would've cooked up something more, I don't know, original.

Pak Lah delivered this horrendous news to the Malaysian public on TV, a medium once deemed obsolete after the growth of the Internet. It was followed by video clips of TMNet staffers hurling themselves off skyscrapers, for their existence have lost all meaning, mountains of corpses piled up within a night, their blood flowed like river. No one bothered cleaning up the mess though, and since then, Petaling Jaya was perpetually filled with the sickening stench of rotting flesh.

Of course, not only the TMNeters were involved in this mass suicide, hundreds, perhaps thousands of people who knew they were incapable of living without the Internet gased themselves in their sleeps too, or commit harakiri, or commit seppuku (don't ask me how they knew, they just did), or jumped off buildings, or ran non-stop until their hearts stopped beating, or until they were ran down by cars.

I knew a huge percentage of people have died then, but the exact figures were withheld by the government. The newspapers didn't help much either.

More than a year have passed since then. The stench of the dead remained, stronger than ever before, but I have gotten used to them, just like how I have gotten used to the loss of the Internet. All right, maybe not, but I made sure I wouldn't think much about it. I have my books, my DVDS, TVs and such. Sure, not being able to update my own blog felt... strange, the blogwhoring, the traffic-watching, the usual annoyance I felt with certain 'big-named' blogs (those were the worse, despite my personal hatred towards these, I couldn't help but revisit them everyday). What about my daily dose of film and NBA news? The newspapers couldn't satiate my thirst for instant information.

Have blogs became such huge part of my Internet activities during the months prior to its collapse?

What have happened to bloggers around Malaysia? Did they commit suicide as well? I was overwhelmed with curiosity, a curiosity that reinforced my belief that I had immersed myself too deeply into both blogging and the bloggers, much deeper than I had ever wanted myself to be.

Was I a blogger? I never wanted to call myself that. I was an independent writer filmmaker who had a video blog. That was it.

And the independent writer filmmaker within me had to start working again, otherwise I would die too. Of boredom. Picking up my camcorder, and exiting my house without my parents' knowledge, I've decided to take a LRT to Kuala Lumpur.

Having not step out of my house at all since the Digital Apocalypse (that's what they called the day when we lost the Internet), I was nervous when I was making my way to the LRT station near my house at Paramount Garden. Garden? Hah! It should be renamed as Paramount Wasteland, or Paramount Cemetary. The streets were empty, the houses were mostly broken down, there was nothing for me to film. I was the only one at the station, awaiting for the train to come.

Dimly-lit, only one single light worked in the station, flickering weakly over my head. I wondered whether the LRT would come.

It did. Surprisingly. I walked in and saw a few other people in the train.

I took a seat and looked out the window from within the train. Petaling Jaya had been reduced to ruins, black smoke swirling from skeletal remains of houses. Corpses littered everywhere. Police cars patroled the streets, shooting down scavengers who were gathered around the corpses.

A bespectacled man entered, holding a large stack of papers (leaflets, I realized when I scrutinized more carefully). He then started handing out these leaflets to everyone in the train while mumbling, and when he approached me, I could finally hear what he was saying.

"My little birds got me these news, news of our government's failures and their decadent private lifestyles." The man said waving the leaflet before my face. "It is time for us to rise, the strength of us civilians must NEVER be underestimated. A revolution has to begin, and it can only begin if we speak for ourselves!"

"Really?" I frowned. But I switched on my camcorder and pointed it at him. He took the time to pose, and spoke directly to the camera. Oh, and he took out a crumpled piece of paper from his pocket and held it out too. It seemed to be his photo, from a magazine article. 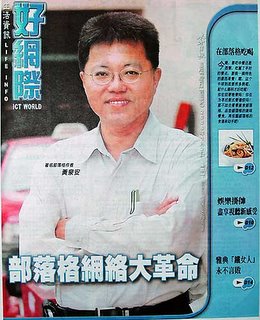 "I am Jeff Ooi. Founder of USJ.com.my, a grassroot-managed community portal targetting Malaysia's K-generation. Gone since the demise of the Internet. I was an e-business consultant for vertical industries, an Open Source advocate, and a columnist in a business journal. This leaflet-" He waved the leaflets again. "-is about governance issues in domestic and global arenas."

"Our nation is weeping, because it is sick. And only us, its beloved citizens, can save it." Jeff Ooi said, staring directly at me. "And my little birds, of course. Would you like to join me in this noble mission?"

Political movements never interest me. Or maybe I just value my life. "Er, no."

"Your thoughts have been tainted after all these years of staying here, but you must know, whilst Hofstede's 5 cultural dimensions stated that we Asians possess a culture where power distance is high, resulting in a hierarchical system that pervades into the very root of our society, things MUST change." Jeff Ooi said. "You must speak out. Go, write on this leaflet, sign the petition."

"Actually, Hofstede's five cultural dimensions have been deemed rather inaccurate since he merely interviewed and studied employees of IBM from various nations. Such a grand study can only be regarded as accurate if every single person in the world were tested upon, otherwise, it was merely generalizing." I said never failing to be a smartass whenever i had the chance.

"Er, no." I shook my head. "My existence isn't defined entirely by blogging, I happen to be a writer filmmaker too. Heard of the 'Great Swifty Speaketh'? I'm that Great Swifty."

Jeff Ooi shook his head no.

"You're either with me, or against me." Jeff Ooi said.

"Only a Sith deals in absolutes." I quoted Obi-Wan Kenobi in Star Wars Episode 3.

Unfortunately, I didn't have a lightsaber.

From the darkening skies, flocks of eagles sped down towards the train in blinding speed, crashing through glasses. I gasped in shock and ducked as pieces of shattered glass fell upon me. People of the train screamed as they were assaulted by these deadly birds. I though I heard the sound of birds pecking into eyeballs, punctuated by death wails, faces clawed by sharp talons, blood splattering everywhere.

Jeff Ooi laughed maniacally. All rationality lost since the loss of his once-mighty blog, his most trusty weapon. Now he had to resort to revealing his murderous little birds, unleashing them upon those who defied him.

The train stopped at the Masjid Jamek, I dashed out and ran as fast as my feet could carry me. I could hear the voice of Jeff Ooi trailing in the distance.

"FEAR MY LITTLE BIRDS! I am the king of LRT!" He shouted. "I should've been the first Malaysian in Technorati's top 100!"

His voice was silenced when the doors slid shut, and the train hurtled away.