Swifty's Blogosphere Tale Part 2: Bloggers Who Do Lots of Cutting And Pasting.

I didn't know how long I've ran from the crazed Jeff Ooi and his murderous little birds. Running through the streets of Kuala Lumpur, I saw nothing but death and destruction, wrecked cars, collapsed buildings? Scavengers gathered around cars, breaking them apart, stealing whatever they saw from within. I snuck into the shadows, careful not to attract any attention as I filmed those people in secret, I was standing in front of the abandoned building which was once known as the Central Market. I knew I wasn't that far away from Petaling Street.

Petaling Street, the thought of the name made me frown, triggering memories of the days before the Digital Apocalypse. Petaling Street, the chinatown located in Kuala Lumpur, was the namesake of this popular Malaysian blog aggregrator/blog portal called Project Petaling Street. It was almost the hub of the Malaysian blogosphere, the very pillar of the blogosphere. 'Blogebrities' were born, cliques were formed, feuds were fought, 'bloglitics' (a term coined by famous Malaysian blogger Kenny Sia, whose whereabouts remained a mystery since the Apocalypse) were played. It was part of a game, those who could play by its rules flourished, whilst those who didn't were shunned and lynched (figuratively).

Voices emanating from within the Central Market interrupted my reverie, the realization that the abandoned building wasn't exactly abandoned dawned upon me. Shuddering slightly in fear, I peered through the entrance, wondering what manner of horrendous sight was awaiting me. A sacrificial ritual? A gang fight? A drug transaction? A stripdance?

I was hoping for the last one, but it seemed as if my guesses were wrong. I saw two men, dressed in rags, engaging in a conversation, around them were mountains of newspapers and magazines. I pointed my camcorder at them, and zoomed in, hoping to get a better view. They were cutting out articles from the newspapers and magazines, pasting them upon manuscripts. 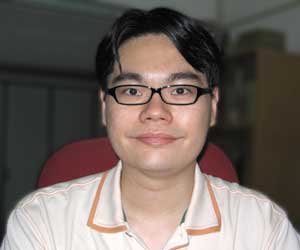 One of them, a bespectacled man, saw me, I stiffened in fear, lowering my camera. But he merely beckoned me to them in a seemingly friendly tone. After the whole Jeff Ooi episode, I wasn't sure whether I should trust him. Besides, the smile upon his face looked rather, well, intimidating.

"Are you here to know about the latest technology, computers and Internet in Malaysian style?" The bespectacled man asked.

"Er. I don't think there's much to know about the Internet considering that it's already collapsed since the Digital Apocalypse." I said.

"Ah, yes." The man flipped through his manuscript and stopped when he found a particular page. "I have an article about the Digital Apocalypse. Would you like to read it?"

He didn't seem dangerous, but I wasn't going to let my guard down. I shook my head.

I gave him a fake name while throwing a brief glance at his companion briefly, but the other guy's back was turned towards me, and he was busy cutting out pages from magazines, possibly oblivious to my presence.

I recognized the name immediately, and fixated my attention upon him. I've just found another blogger. The man who was known to all as LiewCF during pre-DA days, he who withdrew from the Petaling Street after accusations of him being 'too commercial' and was merely blogging for revenues generated from Google Adsense.

"What's the Malaysian style?" I frowned.

"It means that my notes will be in Manglish." LiewCF said, holding up his manuscript before me.

"But why in Manglish? Why not cater yourselves towards a wider audience?"

LiewCF smiled sadly. "Because the limitations of my mastery over the intricacies of the English language restrict me from appealing to readers who are not of my own country. It is, alas, a weakness I should have tried rectifying in the past, but never had the chance to. Perhaps I merely wanted to maintain a feeling of Malaysian-ness for the sake of generating some sort of connection between my readers and my blog. It is an identity I want to create for my product."

"I know a special trick which can transform your computer into a bazooka. Do you want to give it a look?" LiewCF said. Showing me another magazine cutting.

The other man stood up and greeted me. He was holding a manuscript too, and the pages of these manuscript were filled with photos.

I groaned. He was a pimp.

"I'm NOT a pimp. I'm Kah Soon." The man said, answering my thoughts. "Do you think these women are hot?"

I looked at the photos.

I couldn't tear my eyes away from them.

"On a scale of one to five, how would you rate this girl here? One being ugly, and five being beautiful?" Kah Soon said, pointing to one of the photos. He held out a pencil to me.

"Four." I wrote on his manuscript.

"Right." I fished out some coins, counted them, and handed it to Kahsoon.

Then I realized what I've done, and gasped in horror.

"Please mind your language, my good sir, you parted with your money rather willingly." Kah Soon said.

I swore underneath my breath, the treacherous man had swindled me off my money. Mesmerizing me with photos of beautiful women, I had lost all rationality and had handed him my money without giving it any thought.

"Fret not." LiewCF said, "You can easily earn your money again. Read this article of mine about how to turn your printer into a multi-tasking money-printing machine. It's only fifty cents per read. Or here's a booklet about creating fembots which you can pimp out to get some money."

"I won't let you take advantage of me again!" I said to these two notorious cut-and-paste bloggers who were boycotted by the community of the Petaling Street site long ago. Kahsoon, most specifically, was the most notorious. "You goddamn swindlers!"

"I could never understand why people like you are so against the very existence of commercial blogs. Things like these are common overseas, yet people here must always whine and bitch about the fact that I was earning money from my blog." LiewCF said slowly.

"The methods of earning them are questionable." I replied.

"Questionable? How? As in cutting and pasting information from other sources?" LiewCF sneered. "Oh wait, you are another one of those people who think that it isn't enough to merely place a link to the original source. Is that it? That all I am doing is merely to regurgitate information that have been posted by others. Perhaps if I have chosen NOT to credit my sources, your accusations towards me would've been justifiable, but information are meant to be shared, not being hoarded like a treasure, that was what the Internet was for."

Kah Soon spoke. "You have underestimated blogging as a medium, before the Digital Apocalypse, blogs have evolved from being mere personal diaries, they were the next step from personal sites, but with more interaction between readers and writers. Look at Technorati, look at the top 10 most searched words, look at the blogs entries about these topics. Do you see these people blaming one another for being 'cut and paste' bloggers merely because they were blogging about the same topic? Trackbacks were encouraged and one can search through the numerous blog entries to view the varying opinions of a particular subject, thus developing a broader perspective of something."

I shook my head, I was too polite to interrupt these two men when they launched into their tirade, but I needed to gather my thoughts before speaking again. "Perhaps one of your flaws was the myopic view you had upon your own products, your blogs. Your inability to focus upon the intangibles of running a business caused the negative backlash. Things would've been easier if you had better public relations, and established a better relationship with your readers and other potential market. After all, managing a business isn't only about developing the best products. To focus solely on the revenues you could generate was naive, and unwise."

"Do NOT patronize me." Kah Soon snarled. "People like you disgust me. Always believing yourself to be right and expecting others to conform to your expectations. You were a blogger, weren't you?"

"Nay, merely a person with a blog." I replied.

"It is highly ironic that in a supposedly collectivistic culture of ours, Bloggers in Malaysia possessed such individualistic attitudes when it came to blog content." LiewCF snorted.

Kah Soon fished out the money I paid him from his pocket and handed it out to me. "If THIS is what made you so disgusted, if the fact that I am using my own methods to make a living disgusts you, take my money and go. So high and mighty that you think you can judge me huh? You could've just walked away when I showed you the photos, but yet you lingered, and ravished the sight of those photos with your lecherous eyes. But I will not judge you for I do not think of myself that high and mighty, I do NOT delude myself into believing that I am always on the moral high ground. I am, after all, a mere merchant."

Oh. The drama. The irony to be lectured so eloquently by these two 'cut and paste' bloggers. I was glad that I filmed them throughout the entire exchange. I merely shook my head and switched off my camera. And without saying another word, I turned away from them and started walking away.

Who was right? And who was wrong? These opportunistic bastards? Or those who shunned them? What was it that separated one group from another?

I am such a fan of moral ambiguity.

And thus I continued my lone journey into the night, through the ruins of Kuala Lumpur, searching for more participants of the phenomena known as 'blogging' just before the Digital Apocalypse. After all, a slice of history has to be preserved before being completely obscured by the sands of time.