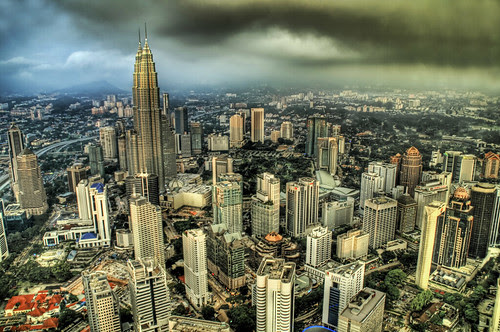 Photo by Stuck in Customs

Two months ago, I posted about RED BEAN SOUP, an abandoned short film project of mine. And from the ashes of the discarded idea, I pieced together another story called KL RHYTHM.

KL Rhythm, as you can see from its title, was another urban story. I wanted to romanticize the city of Kuala Lumpur like Woody Allen did with New York City, yet infuse it with colourful MTV-style hyper-realism like one would see from the works of Jean-Pierre Jeunet (Amelie) and Tom Tykwer (Run Lola Run and the short film, True).

It was definitely a notch above the melodramatic silly weepie RED BEAN SOUP, but still not the follow-up for GIRL DISCONNECTED I had in mind. Since the chances of me actually making this short film will be rather low, I'm posting the treatment of KL Rhythm here instead.

(note: The film is meant to be in Mandarin)


A LRT train moves slowly and steadily. The morning sun burns brightly outside, golden rays seeping through the windows, casting a dreamlike glow into the interior of the train, and at the passengers.

Sally opens her eyes, awakened by the probing rays. Blinking once and twice to dispel her drowsiness, she stifles a yawn and takes out a notebook from a handbag. Leafing through the pages until she finds an empty one, she starts writing: "Why do I hate Kuala Lumpur".

She shifts her attention to the windows, looking at the scenery. The morning sun shines brightly and beautifully.

Through a window of a house, a LRT station can be seen passing by in the distance. A composer, Jin, plays the piano, he's struggling to compose a song, all he can play is the first few notes. He's stuck. Behind him, on a table, is a laptop. Its screen glowing brightly, his browser is showing the Friendster page.

Jin's friend 2
(business-like, bespectacled)
Exactly! Look at me! I’m working at an accounting firm! Stable income! Recognized by all!

Jin's friend 3
(geeky, also bespectacled)
Hey! Remember Alan from our university? The guy got married! Oh, and I just bought a house at Bukit Kiara, you should come over and chit chat someday!

Jin's friend 4
(scowling)
Why am I still here? Delete me! I've told you that I'm not into you! I already have a new boyfriend!

JIN'S FRIEND 5
(sheepish)
I'm the new boyfriend. Sorry I didn't tell you earlier man. You were just SOOO into her.

Sitting at a bench, Sally takes a sip of coffee, puts it aside, and looks at the title of her article again. She says via voiceover that she wants to write stuff that are socially and politically relevant so that she can finally be TAKEN MORE SERIOUSLY AS A WRITER!

But what does she hate about Kuala Lumpur? The hot weather? The crazy traffic? The dirty public toilets that usually don't have toilet rolls?? people jumping queue all the time? (all these could be done with amusing cut-ins) Pretty generic reasons, Sally frowns. Her paper remains blank.

Back at Jin's place. Jin is still seated before his piano. In despair, he looks at the marble busts of Mozart and Beethoven and asks them why composing was so easy for them.

The marble busts look back emotionlessly.

At a cafe, Sally is still stuck with her written piece. Another girl taps her on the shoulder, Sally quickly puts her stuff into her handbag and greets the newcomer, her friend Mindy. Apparently Sally is here to meet up with Mindy, they chit-chat. Mindy has a office job, a nice boyfriend, great stable income, and parents are happy with her. Mindy asks Sally whether she has a job, Sally says that she's writing, Mindy repeats her question (obviously not considering writing as a job), Sally shakes her head no. A boyfriend? Sally shakes her head again. No income? Sally shakes head. Parents? Sally shakes head, this time, she rolls her eyes. Mindy looks sympathetic, continues blabbering, Sally, via voiceover, says that she kinda envy Mindy, cos she doesn't need to worry about things that Sally has to worry about. Maybe that's why Mindy lives a happier life.

Jin is typing on his laptop. He is chatting via MSN.

"Why don't you go out?" Someone asks.

"I can't take the heat. I feel dizzy when I'm exposed to the sun." Jin types.

(A flashback sequence. A hand reaches for the sun, shafts of light piercing through. Hand belongs to Jin, he is outside somewhere, looking at the afternoon sun, then, the sun seems too much for him, he passes out.)

"So you're alone all the time?" Someone asks.

Jin's hands remain motionless above the keyboard, as if he doesn't know how to reply.

Back in the cafe, Mindy says bye bye and heads off. Sally takes out her scrapbook and pen from her handbag again, and via voiceover, says that she likes having her own space, writing gives her that, it's just that most would think of her as a weirdo.

"WEIRDO!" a kid standing nearby says, pointing at her, startling her.

At home, Jin sits before his piano, his shoulders slumped. Voiceover: "Without my music to fall back to... what do I have?"

Sally sits before a lake at a park, the sun is setting, she looks melancholic. Slowly she writes "KL makes me feel lonely... sometimes."

Jin continue chatting with someone via the Net: Their conversation is as follows:

Jin's friend: "Go out and feel the rhythm of the city."

Jin's friend: And get over her, you dolt!

Sally raises her hand, and let the golden shafts of the sun passes through her finger tips. And then, in fast motion, the sun sets.

A LRT passes by behind Sally as she begins her monologue (superbly flashy and visually stunning montage sequence begins, which involves shots of Sally and Jin wandering at random pretty places of KL to illustrate her monologue):

Sally (via voiceover): When night descends upon KL, it becomes strangely beautiful, I think it is the time when it truly comes alive.

The dazzling neon lights of buildings.

The majestic twin towers that reach into the skies.

Sally (via voiceover): The roads, flooded with cars and other vehicles. Strangers, all of them, temporarily traveling towards the same direction, feeling a brief moment of connection.

Footsteps, the sound of car honking, traffic lights (any random city sounds). Slowly, he starts to link together a strange rhythm he hears from it. Piano music in his mind starts playing in the background.

Sally (via voiceover): When night descends upon KL, it becomes strangely beautiful, I fall in love with the sound of people, walking, talking, laughing, so filled with life.

Mamak stalls, cafes, kopitiam, clubs, all gathering places for people. Friends and family, connecting with each other, or sometimes even with strangers. And with that, they become friends, the path they have been walking for many years by themselves, intersecting at that very moment.

Jin and Sally continue walking through KL, occasionally appearing at the same places. Jin seems liberated after locking himself at home so much.

Sally (via voiceover): When night descends upon KL, it becomes strangely beautiful... I think I kinda like it.

Sally smiles to herself. And then looks at her scrapbook, she's shocked that she has written down her own monologue. Feels embarrassed that she sounded so sappy, she crumples the paper and wants to throw it, but decides otherwise, she puts it in her pocket.

Jin says via voiceover that he has finally heard it. The rhythm of the city. Jin takes out a camera and take photos of everything that gave him inspiration.

Sally takes out her own camera and does the same, it's giving her inspiration anyway.

They both snap pictures, click click. Then, after a brief montage sequence it becomes increasingly apparent that they are both at the same place.

Sally and Jin accidentally take photos of each other (they both wandered into each other's shots).

Looking up from their cameras, they both smile.

That's it. This has the potential to be an amusing and fluffy little piece starring some promising newcomers and up-and-coming local pop idols, I can just post it on Youtube after that. It MIGHT get acquired by Astro, but other than that, nada.

As excited as I was when I finally completed the treatment 2 months ago, I gradually ceased to believe in it. Perhaps it had to do with my trip in Chile, but whatever it was, the shallowness of the characters (my lack of knowledge on actual composers was a major impediment) and the contrived (nearly) lightweight concept became less enticing to me as a film project.

Motivated by BLUE ROOF's (a Woo Ming Jin-directed short film I was involved in producing and editing in July) selection at the Pusan Film Festival, I initially planned to kickstart preproduction for KL Rhythm a few days ago, starting work upon the actual screenplay (AND WRITING THE LINES IN CHINESE!! DIFFICULT!), recruiting possible crew members, and most importantly, seeking the right people for the lead roles.

But a discussion with mentor Ming Jin yesterday afternoon confirmed and reinforced some of my deep-seated suspicions and doubts about the short film, and after that, I knew I didn't really want to make the film.

It really didn't feel like a film by me, more like me going through the motions, drawing forth whatever filmmaking influences I have in my repertoire to help conceal the shortcomings of the film, or hoping that my flamboyance with the visuals would come alive by itself to save the film.

I made a major mistake, breaking a rule I set for myself long ago.

During the writing of short films VERTICAL DISTANCE and GIRL DISCONNECTED, I made sure I would juggle the jobs of writer and director carefully. When writing, I imagine myself as merely a screenwriter (and not director) and try to come up with a written material as strong as possible.

But when assuming directing duties, I would try to pretend that the script wasn't written by myself, and think carefully how I would attempt to interpret the words with visual images.

In the cases of my two scrapped projects, RED BEAN SOUP and KL RHYTHM, I was writing WHILE planning how I would direct the film, thus blurring the line between writer and director, destroying all objectivity and rationality I would hold to. It became more a case of Swifty the writer trying to serve Swifty the director, a major no-no, hence my inability to really come up with something that good, more like retreading paths that I've already visited.

Ah well, that's all. No need to mourn for me, I'm currently preparing script treatments for two TV movies. THOSE I'm definitely excited about.