Dad had finally finished his conference, so he could finally join us (that's me + mom + Uncle Beau) on our Taipei exploration.

First place of the day we went to was the Guanghua Market, which is Taipei's equivalent of Low Yat Plaza or the Digital Mall (or Japan's Akihabara) 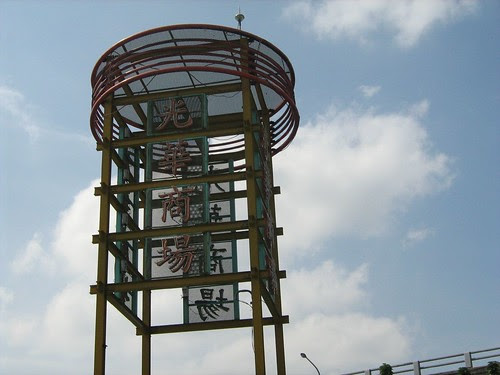 TV drama, A LOVE TO KILL (starring Rain) because I'm hungry for some Korean melodrama and the Japanese dorama H2, because I've read the manga and I'm curious about its adaptation. Or maybe I bought them because they were both rather cheap and had nice-looking boxes...

After the we went off to the new ESLITE building, this one's the biggest bookshop in Taipei, I think. 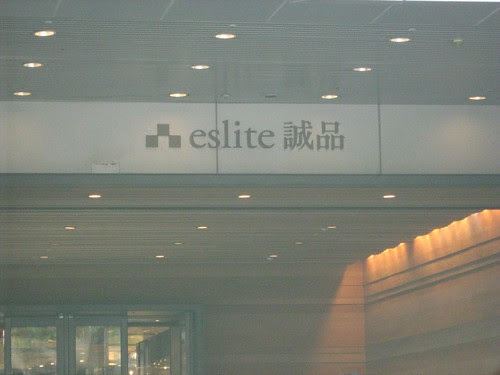 It's a pretty classy place that brought peace to my perpetually stormy heart. 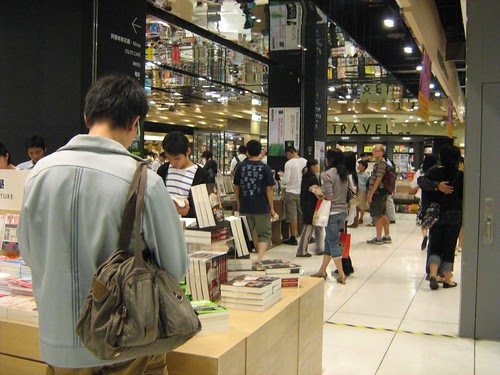 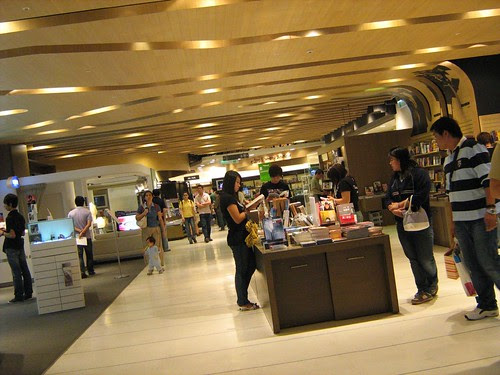 I went to the 'ASIAN CINEMA' book section and picked 'PLANET HONG KONG: Popular Cinema and the Art of Entertainment' by film theorist David Bordwell (clicking his name will bring you to his blog, or you can check out his Wiki!)

Published in 2000 and somewhat dated, PLANET HONG KONG is one hell of a book that (quoting Kirkus Reviews) 'outlines the history, economics, and production techniques of the Hong Kong studios, particularly focusing on the genres that are most closely associated with their success (the kung-fu film, the swordplay epic, the gangster film, and the urban comedy). These historical chapters alternate with analyses of specific directors, with particular attention paid not only to such well-known filmmakers as John Woo and Wong Kar-Wai but also to some figures worthy of greater attention in the West (such as King Hu)'.

I was only in the bookshop for nearly two hours, so I had to flip through the book to read some parts that I'm interested in, namely the chapters about John Woo, Tsui Hark and Wong Kar Wai (Johnnie To wasn't as respected then... *sigh*) and was mesmerized as I got reacquainted with HK cinema history, understanding again the roles these directors played during the Hong Kong New Wave in the 70s and 80s.

I see some parallels between the current Malaysian New Wave and the HK New Wave, although in Hong Kong, most of the works then, while regarded as 'arty' and 'experimental' were able to be absorbed into the mainstream, while the Malaysian indie arthouse films have yet to really find real commercial success (the works of Yasmin Ahmad may be an exception), though I hope the trend will end soon. I was familiar with Wong Kar Wai and John Woo's histories, but Tsui Hark's chapter intrigued me, because I realized for the first time that his role as producer had just been as important as his role as director (if not more) since he DID produce (and NOT direct) classics like the A BETTER TOMORROW films (which placed John Woo and Chow Yun Fat on the map), THE KILLER and A CHINESE GHOST STORY.

After a promising beginning, where he made three critically-acclaimed films (that were all commercial failures), Tsui Hark went off to make blockbusters instead (like Aces Go Places 3, a spy spoof) in the mid-80s and began focusing more on crowdpleasing pop films, to the disappointment of many. He was then regarded as a sellout and 'a prime example of Hong Kong film's inability to rise above vulgarity and commercialism'.

I read about the rules he would put up for directors whose films he were going to produce, the first few had to do with directors sticking to their own styles, being efficient etc. but the last one was, I paraphrase 'film is a mass medium, please ensure that your film will entertain and please the crowd'.

Aside from being a budding film director, I'm also a budding film producer myself (who is, er, credited for the grand total of one short film 'BLUE ROOF', though some quarters would also credit me as the 'producer' of the award-winning Elephant and the Sea!! But only because I now work as the producer of its production company and was involved in some of its post-production work and possibly its upcoming marketing stuff), I can't help but fantasize myself being able to do what Tsui Hark did, not exactly selling out (but making mainstream films is not something I will shy away, definitely) just that I find a great new director and help produce a classic which is both a critical and commercial success, WHOOHOO!

Ack! Enough with my fantasizing!

By now, most who came for the photos have probably shied away, so I'm just going to meekly continue putting up photos.

After hanging out at the bookshop (something I do often, that's why illiterate women and intellectually uninteresting chicks who don't dig books never thought of going out with a guy like me) I tried out the Oyster Omelette Annna told me about. 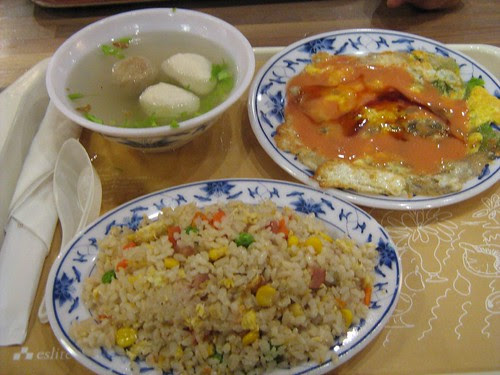 It was all right. (ordered a set meal, so it came with fried rice and soup)

For dinner, we went to a place called Shin Yeh. We waited for nearly an hour to get in, but finished the meal in a little more than half an hour. 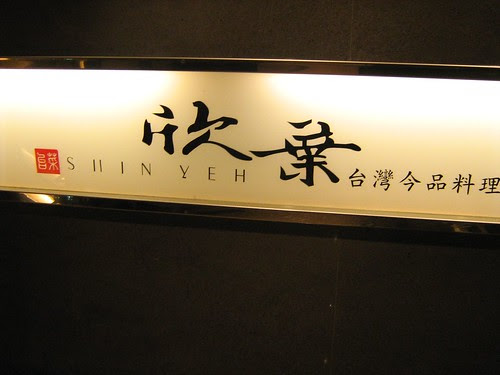 Dad and I looked stoned... 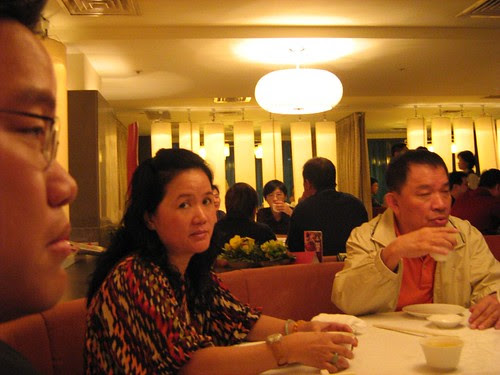 There was also this cute baby sitting behind me. 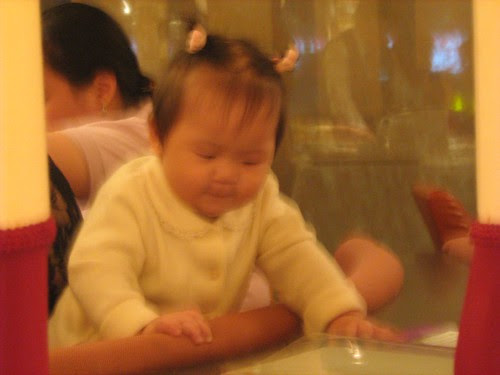 (Note: I've always loved little kids in a non-pedophilic manner, that's why heartless young women who don't like children will never dream of going out with one as kind-hearted and nice as I) 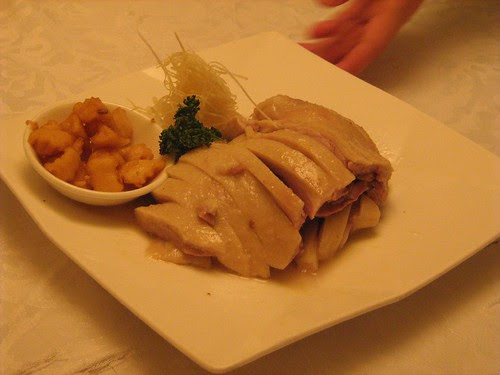 And the rest of the dishes (fish, braised pork, tofu, etc. Ate them all with porridge) 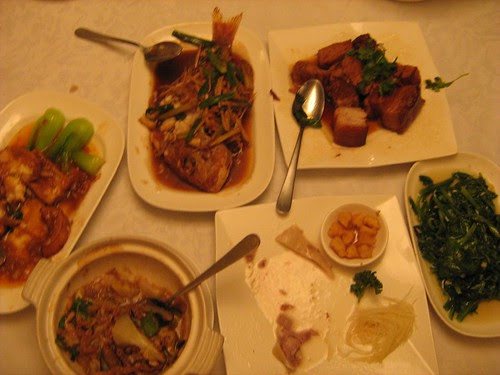 I'll just end this post with more night photos I took of Taipei streets, because, night photos look cool, and it might seem as if I'm saying something profound without the use of words but only with images. 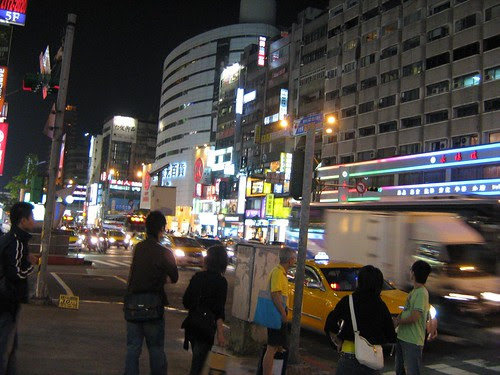 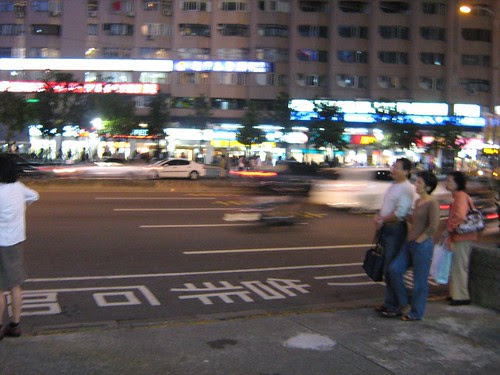