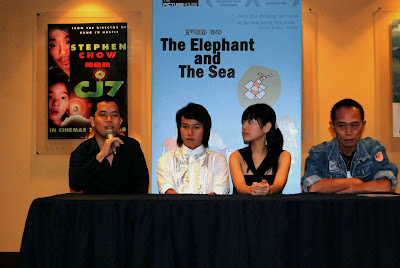 
THE ELEPHANT AND THE SEA finally had its press premiere yesterday morning. I was so excited that I called Ming Jin just before it started to check out on things, and to remind him who were to attend it. But now that I've already read Ming Jin's post about the premiere, I felt only relief. The past week of putting this together had been hectic. Especially when Ming Jin had to head off to the Brisbane International Film Festival for the screening of KURUS (aka DAYS OF THE TURQUOISE SKY) and I was left to handle things.

If two weeks ago you've told me that I can orchestrate half of a press screening in Malaysia while being physically in Tokyo, and doing all these entirely by locking myself away in my dorm room, making numerous international phone calls (using the Low-rate VOIP program), firing emails to instruct interns I've never met, swiftly doing the Chinese translations for press invitations, press kits etc. by referring to Chinese websites how such things were writen, I would've thought that you were nuts.

But that's really what happened to me in the days leading up to the press screening. (It's also a good thing I'm still having my summer holidays.) It's surreal and thrilling at the same time. I also have to declare that the aforementioned Low-rate VOIP program as a must-have program for all budding film producers who often need to operate from overseas!

I was involved only in the post-production of THE ELEPHANT AND THE SEA, months after a rougher cut of the film was already circulating in international festival circuits. My job was to secure the Malaysian theatrical release for the film (which means countless long trips to the Censorship Board at Putrajaya) and also to do a 'Malaysian edit' of the film.

Despite jumping on board much later than everyone else, THE ELEPHANT AND THE SEA became like an adopted child who gradually grew on me. To the the additional editing for the film contributed a lot to this, I guess. Imagine being a guy who had often grumbled about 'not understanding' the slow languid pace and inaccessibility of critically-acclaimed and award-winning films of the Malaysian New Wave, and then suddenly being given one of these films to work on by making it quicker paced and more accessible. Man, oh man, I think I almost removed 10 minutes worth of footage from the film just to speed things up!

It's great to see the film getting its theatrical release, and a little bittersweet because I wasn't at the press premiere in person, nor will I be around during the film's limited run at the theaters, but hey, at least the countless long trips to the Censorship Board at Putrajaya were worth it! 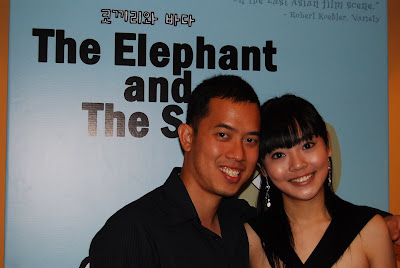