Two reviews of DAYS OF THE TURQUOISE SKY (KURUS) 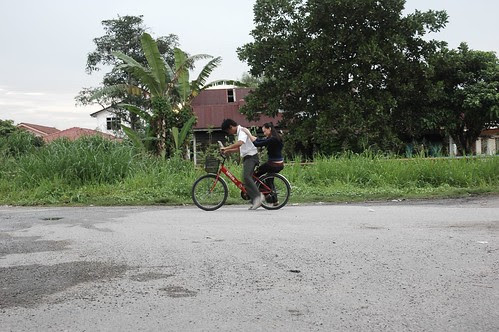 KURUS, or DAYS OF THE TURQUOISE SKY, continues its festival run. Here are two recent reviews of the film from our Southeast Asian neighbours.

The first one is a capsule review from WISE KWAI'S THAI FILM JOURNAL when he attended its screening at the Bangkok International Film Festival last month (our film won the Special Jury Prize under the Southeast Asian competition).

Rushmore without the quirk - not necessarily a bad thing - this is a sweet tale of a schoolboy's crush on his pretty new English teacher (Carmen Soo). It's not quite coming-of-age, because it's all very innocent.

The other one is written by Francis Cruz on his film blog, LESSONS FROM THE SCHOOL OF ATTENTION. Thanks to him, I just found out the film was screened at the 2008 .MOV International Digital Film Festival in Philippines. Haven't been keeping track lately.

Adult concerns are dealt with but mostly with subtle brushstrokes, like in the suggestive discussions about the father's incurable gambling problem in Woo's film or the parental concerns in the backdrop of Hou's film. Attention is given to the concerns of the youth, through their quaint interactions they share with each other, reflecting on their volatility in the midst of slow and steady change.

Days of the Turquoise Sky is a collection of familiar facets of growing up, nuanced but never to the point of them calling attention to themselves. Woo keeps the narrative minimalist, skirting away from drama and histrionics and instead, maintaining an observant, if not reminiscent, stance on these commonplace eventualities.

Aside from the reviews, both blogs mentioned above are recommended reads if you're interested in the films from their countries.

I also noticed a sudden spike in traffic for my old KURUS/ DAYS OF THE TURQUOISE SKY-related posts (and the photos on Flickr) in the past two weeks, especially from Philippines. I think the majority of the interest was generated by Carmen Soo, whose popularity in the country had skyrocketed thanks to the TV drama, KAHIT ISANG SAGLIT (A Time For Us), Malaysian-Filipino co-production (trailer's... intense).

Well, Carmen's popularity is well-deserved, since she's genuinely nice. On the day I left for Tokyo in April, she was one of the few (along with DAY OF THE TURQUOISE SKY co-star Mislina) who called to say goodbye (of course, she wanted to make sure it wasn't an April Fools' prank. It was unfortunate that I left Malaysia on the 1st of April -_-)

You can view more DAYS OF THE TURQUOISE SKY-related blog posts here.