Originally, I've intended to write about both the TOKYO FILMeX opening ceremony, and then my thoughts on the opening film co-directed by Walter Salles and Daniela Thomas, LINHA DE PASSE (really good film). But I'll write my review in my next post.

I headed to Yurakucho rather early today because it's the opening of the TOKYO FILMeX and I wanted to make sure I can get tickets for LINHA DE PASSE. I was pleasantly surprised to find out that there would be an opening ceremony before the screening of the film. Being one of the first to buy tickets at the door, I managed to secure two nice seats for myself and my friend, Mahmoud the Tunisian director. (Four rows from the screen) 
While I know about the North Korean abductions of Japanese, and might have read about Yokota's story in passing, I have to admit that I didn't know who she was when I was first looking through the photos. Everything was in Japanese, so with my rudimentary grasp of the language, and my own deducing skills, I tried to figure out what was the exhibition about. I knew it was about a young girl named 'Megumi-chan', I saw lots of heartwarming photos of her with her family, and then I gradually figured out that something bad happened to her, but I wasn't sure what it was. I understood the words 'disappearance', but not more. Then I saw photos of a grown-up Megumi getting married, and carrying her baby daughter, and I began to deduce that it might be some impostor case similar to Anastasia's.

I pondered a little more, studying the photos in the exhibition and finding myself feeling slightly suffocated by the heavy atmosphere caused by them. I walked out and someone showed me some books written by Megumi's mother, and then, a manga based on her too. I got increasingly intrigued, spotted an English version of Megumi's mother's memoir, and finally, after half an hour at the exhibition, knew what exactly was the exhibition about.

Prior to the opening ceremony, I bumped into Jason Gray again, but was horrified then that there weren't any popcorn for sale, so Mahmoud and I ran off to a nearby convenience store, bought some snickers and drinks before entering the hall for the TOKYO FILMeX Opening Ceremony. We were just in time. The ceremony was officiated by its festival director, the jury members of the FILMeX competition walked onto the stage, and I got very excited when I saw legendary Hong Kong actor Tony Leung Ka-Fai, whom I've grown up watching. He had totally dyed his hair white! I went "OMFG, it's Tony Leung Ka-Fai and borrowed Mahmoud's camera to snap a photo when chairperson of the jury, Nogami Teruyo (frequent collaborator of Akira Kurosawa) was giving a speech. The other members of the jury onstage are Korean film director Song Il-Gon, Brazil / Sao Paulo International Film Festival President Leon Cakoff and French film critic Isabelle Regnier. 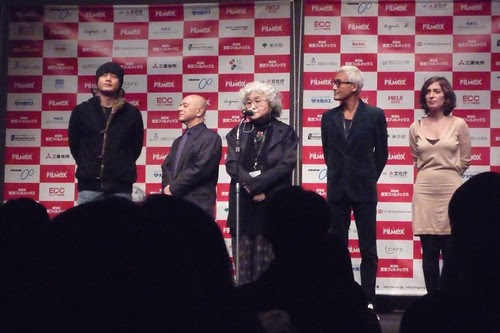 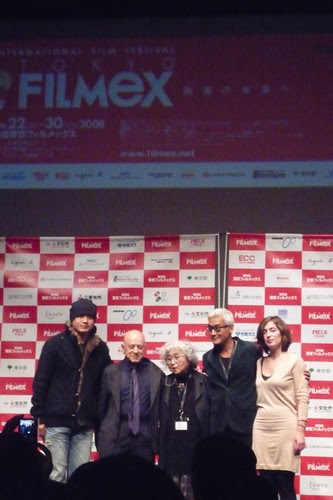 In 'Big Tony's honour, I shall name, off the top of my head, the top 5 greatest Tony Leung film roles. Not in any particular order.

The role that won him his third Best Actor award at the Hong Kong Film Awards in 2005. Since playing the hot-tempered and loud Big D in Johnnie To's film, he had been playing variations of this character in the past few years, like last year's THE DRUMMER.

Tony Leung Ka-Fai talks about his character in ELECTION

This role earned him his second Best Actor award. As a kid, my memory of Tony Leung Ka-Fai was defined by his performance as the effeminate detective Keith Lu (Lu Fong) in this classic film. Many remember TV actor Gallen Lo Ka Leung playing the same character in the TVB series Old Time Buddy.

3) CHU REN in He Ain't Heavy... He's My Father (1993)
This time-traveling fantasy has both Tony Leungs. Tony Leung Chiu Wai playing the son, and Tony Leung Ka-Fai playing the dad. Story's about 'Little Tony' traveling back in time by accident to the 1960s see the courtship of his parents. Yes, it's pretty much the storyline of BACK TO THE FUTURE, but with Hong Kong nostalgia instead. The most memorable scene for me was when both Tony started singing 'TELL LAURA I LOVE HER' (like BACK TO THE FUTURE, the son helping the father with the courtship of his mother) Aside from that, the Chu Ren character had numerous memorable lines that many people started quoting during my primary school period, like 我为人人，人人为我 (kinda means 'I serve everyone, and everyone serve me')

In this unforgettable cameo (which he won Best Supporting actor for), Tony Leung Ka-Fai plays the hilariously tragic Uncle Ninth, who took the fall for his friends when their wives showed up at their favourite strip club. Since then, he had been placed under house arrest by his wife.

Not exactly an iconic role, but I have to mention this cos I think this is an underrated film, and I consider it a classic (not to be confused with the so-so Andy Lau/Jacky Cheung film). Jimmy Yam is a rather complex role, even though it's less exaggerated and showy as the other four roles. A ruthless triad kingpin on top the world. Then he finds out he's the target of an assassination plot, decides to reevaluate this relationship with those around him. All kinds of funny stuff happen.

Well, it's up to you guys to shower your appreciation for Tony Leung Ka-Fai here. Feel free to name his other awesome roles.