I was having dinner with my friend, Niklas, at an Italian restaurant in Takadanobaba (all-you-can-eat for 1500 yen, pretty good deal, had lots of pizza and pasta) yesterday evening. Then one particular customer heading towards the counter after his meal caught my eye.

The physique! The top knot! It was a sumo wrestler! More than a year in Japan and that was the first time I saw a sumo wrestler in the flesh! So I whipped out my mobile phone (which is much more reliable than my camera these days) and started snapping a photo... from the distance, because I was too intimidated to approach him and take a photo.

So you have to look closely at the photo (or click for larger version), behind Niklas and the two waitresses, there's the sumo wrestler! 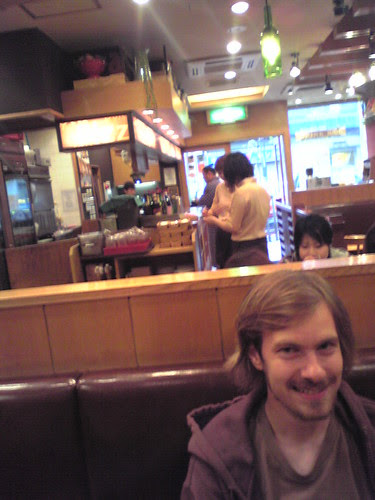 Not satisfied that the waitresses blocked my view, I snapped another one. Good thing he was still standing there! 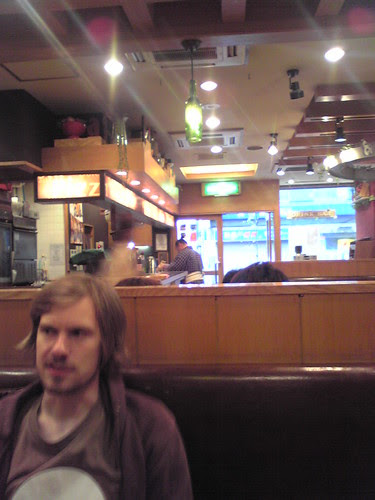 I remember how, during a monologue in Hirokazu Koreeda's Maborosi No Hikari by Ikuo (Tadanobu Asano), he said that he was saddened (or depressed) by the sight of a colleague’s top knot, a vestige from his sumo wrestling days. Quite a contrast, since for me, the sight of one left me with a slight sense of wonderment. Finding the extraordinary in the mundane, I guess.