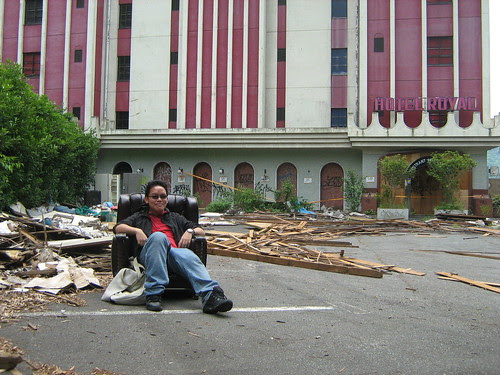 After returning from last Saturday's Fuyajo Cinema Festival in the morning, I had a quick nap before getting up for an interview with Chris Magee of Toronto J-Film Pow Wow.

You'll get to read about a childhood incident that might have started my filmmaking dream.

it was how his parents approached the films that set Yeo on the path he's on today. "There was a time when I went to watch "Tremors" with my parents in the cinema when I was really young," Yeo remembers, "I was freaking out. Mom thought the best way to calm me down was to totally deconstruct the illusion of films, like pointing out how some stuff was just props, how they were just acting, how the guy didn't really die, how the monster was just a construct. Perhaps that deconstruction led to the whole discussion about how films were made." Yeo's mother explained that the person in charge of the props, actors and the monster worms in "Tremors" was called a "director". The lightbulb went on for Yeo.

You can read the full article here.

(I assume the 'hot' in 'hot young Malaysian filmmaker' is a reference to my physical attractiveness, which had long been overlooked. Hah.)
Email Post
Labels: kingyo Love Suicides Media Mention