I've been having problems sleeping again.

The past week when my family were around, I had my most normal sleeping schedule in MONTHS. Sleeping around 1am, waking up around 8-9am, it was healthy.

After finishing my latest THE WHITE FLOWER (I now have the film in screener DVDs, but there will still be some minor tweaks here and there before it really premieres), its month-long post-production leading to some of the craziest, most irregular sleeping time for myself (I would take a brief nap from 11pm to 1-2am, wake up, orchestrate net meetings with Niklas the cinematographer and Woan Foong the composer, getting materials for them to continue the progress of the film, and then updating them by uploading some footage online for them to view etc.) I started having breakfast before I sleep at around 9-10am. 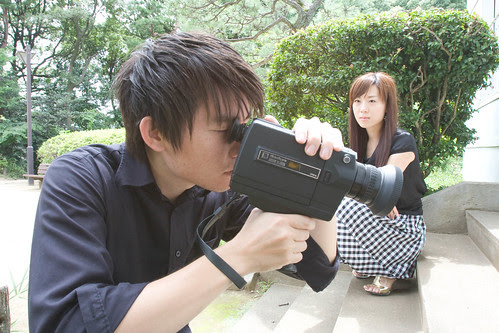 still from THE WHITE FLOWER

The best thing is that I get to skip lunch (which isn't served for free in my dorm, haha) since I often sleep through the noon and wake up around 2pm. I live like a peasant because my deluded romanticized view of struggling artists is one where everything is shoved aside for the sake of his craft or art.

So yes, after THE WHITE FLOWER was done, family came to visit, and I slept properly. They returned to Malaysia on Saturday morning.

I then started planning the storyline for my latest short film. Yes, my 7th short film of the year. A project that happened suddenly (more details in future posts, if I can remember) during a conversation in a cafe when I went to the TOKYO FILMeX end of last month.

My new film is called EXHALATION. I wrote the script back in April when I was in Malaysia just after the WOMAN ON FIRE LOOKS FOR WATER shoot. It's an original script, and not another Yasunari Kawabata adaptation. The script was rather simple and I had planned to shoot it only in one night. Unfortunately, things didn't work out with the film's intended main actress, so I ended up making AFTERNOON RIVER instead (the first half of my upcoming short film AFTERNOON RIVER, EVENING SKY).

Since EXHALATION was written before I finished KINGYO, 3PM, AFTERNOON RIVER, EVENING SKY and THE WHITE FLOWER, I think I might have grown more as a filmmaker in the past 8 months (well, I hope so anyway), so I decided to resurrect the project but transplant the story to Japanese settings, and also to increase the scale of the film.

On Sunday, the day after my family left, I spent the entire day in my room, watching films, doing research, reading Yukio Mishima's DEATH IN MIDSUMMER anthology which I just bought two days earlier (funnily, as I try to find reviews of the book, I would end up finding a 3-year-old entry ON MY OWN BLOG written by guestblogger Justin). There was an idea of turning the story from a solo one-woman piece (initial plan was that all secondary characters were either out of focus, or off-screen, audiences can only see the main actress) to a two-hander (instead of being about one character, it's about two, Kong would point out that it's consistent with my usual theme with 'dualism')

By then, my body clock has already been disrupted. Again.

On Monday (that's yesterday), I hung out in the uni lab to do the Japanese subtitles for LOVE SUICIDES. Film will be screening in Waseda University (along with my KINGYO and FLEETING IMAGES on the 15th of December). Maiko the producer and Liu Jin (assistant producer for THE WHITE FLOWER) were there, so I had a few hours of brainstorming session with them. The film became increasingly dark, elements of child porn, child and teenage prostitution, incest etc. were discussed as possibilities for the film's plot. The film went from a nihilistic drama to a murder thriller, then to a soap opera, and then to didactic sociopolitical bore.

My head was spinning.

In the end we figured it was a bit too much, so we took a more melancholic route instead. With that, a story outline started to take its form. So excited with its materialization that I started typing it out and sent to Ming Jin. I then went home at 11:30pm and took a nap at midnight. I woke up this morning at 3am. Ming Jin said he liked the idea. I became more excited and started to think and think and think. Discussing more ideas with Woan Foong, looking at other films, reading about articles, all these to grab hold of the film's essence.