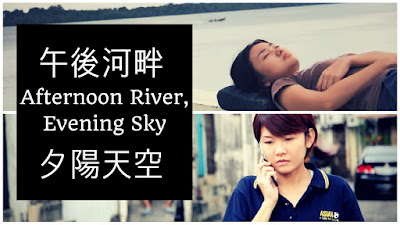 My short film, AFTERNOON RIVER, EVENING SKY, will be one of the 8 shorts films screening at the next edition of Malaysian Shorts in Help University on the 19th of September (Monday), 8 - 10pm.
READ MORE »

My rarely-seen short film AFTERNOON RIVER, EVENING SKY will be screening at the Thai Short Film and Video Festival in Bangkok next week, on the 23rd and 27th of August.
READ MORE »

The Bratislava International Film Festival begins today. My short film, AFTERNOON RIVER, EVENING SKY, will make its world premiere in competition. It is the only Asian entry among the selected short films.
READ MORE »

I've been having problems sleeping again. The past week when my family were around, I had my most normal sleeping schedule in MONTHS. Sleeping around 1am, waking up around 8-9am, it was healthy. After finishing my latest THE WHITE FLOWER (I now have the film in screener DVDs, but there will still be some minor tweaks here and there before it really premieres), its month-long post-production leading to some of the craziest, most irregular sleeping time for myself (I would take a brief nap from 11pm to 1-2am, wake up, orchestrate net meetings with Niklas the cinematographer and Woan Foong the composer, getting materials for them to continue the progress of the film, and then updating them by uploading some footage online for them to view etc.) I started having breakfast before I sleep at around 9-10am. still from THE WHITE FLOWER The best thing is that I get to skip lunch (which isn't served for free in my dorm, haha) since I often sleep through the noon and wake up around
READ MORE »

It all started as a joke. I was on MSN talking to my regular cinematographer Lesly (he shot all my Malaysian short films like CHICKEN RICE MYSTERY, LOVE SUICIDES and the still-unreleased AFTERNOON RIVER) just days before I flew off to the Venice Film Festival. We were discussing the possibilities of shooting another short film after Venice, and before I return to Tokyo (on the 22nd of September, I came back to Tokyo yesterday). I thought it would be difficult, since, after Venice, I would have to rush off to the Singapore Short Film Festival , and after I return from Singapore on the 20th of September, I would only have ONE DAY before flying off to Tokyo again. Lesly said that one day's doable, considering that AFTERNOON RIVER was made under similar circumstances (shot that on the 11th of April, also one day before returning to Tokyo). So I was like "sure, we can make an AFTERNOON RIVER sequel or something, or a spin-off, like following the point of view of the guy who
READ MORE »

Presenting my short films on 8th of August (Saturday)

I'm presenting three of my short films at the KLANG CREATIVE FEST, held in Klang Centro ( map ) on the 8th of August, 4:30pm. (exactly a year after the opening of the Beijing Olympics 2008 :D ) The first one will be the comedy, CHICKEN RICE MYSTERY, which won an Honourable Mention award and a Best Acting award (for lead actress Kimmy) in the BMW Shorties 2008 before screening at the Dubai and Naoussa Film Festivals (Greece).
READ MORE »

So yes, I have completed KINGYO last week, and gearing up for its screening at the FUYAJO CINEMA FESTIVAL in Shinjuku Wald 9 on the 5th of June. Time to rest? Barely. After taking a breather for a couple of days, I began work on my latest short film, AFTERNOON RIVER.
READ MORE »
More posts