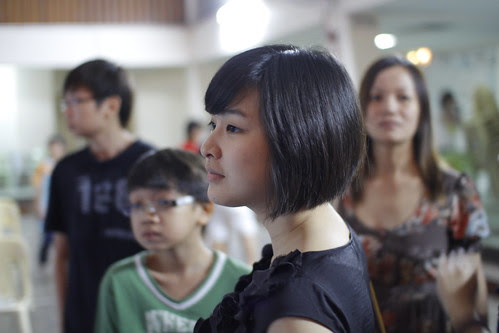 The play was loosely translated as 'Grandma's Magical Box'.

My final year in high school was ten years ago. I was more than a little curious to witness for myself, the artistic endeavors of kids nowadays.

When I walked into the hall, they were actually playing teaser videos on the screens. One of them is this:

It amazed me more than a little, that secondary students of today are capable of shooting their own videos (and then upload them on Youtube), when, during my time (gosh, I sound so old!), to be able to operate a camcorder is a rare privilege. Yeah, ten years had changed quite a lot of things.

The play itself was quite an ambitious one with rather nice production values, where the performances, I can see for myself. were obviously painstakingly rehearsed. With Moon Lai's prodding, I snapped a phew photos of her brother in action (he's the one wearing a cap)

There were even evil clowns in it. Like the ones seen in Alex de la Iglesia's THE LAST CIRCUS. Kidding. 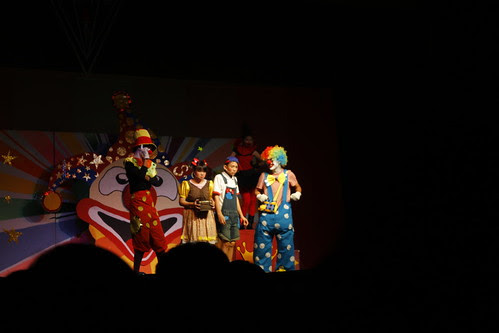 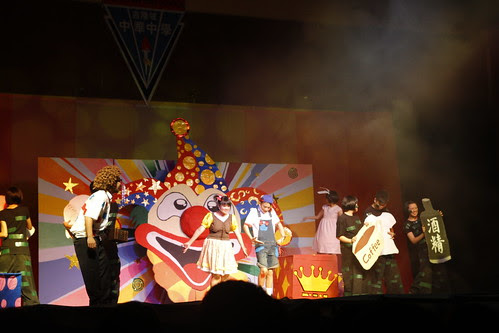 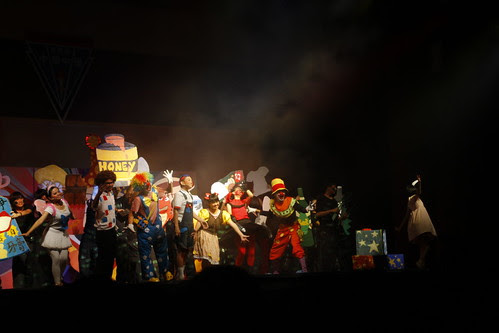 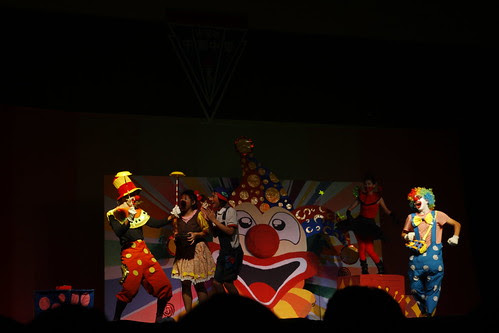 There's even a rather coherent plot. A brilliant but arrogant scientist gets transferred to a village after the failure of his latest invention, in the village, he ends up living with a single mother and her two children (a boy and a girl). He is allowed to live with them for free if he does the house chores and babysit the kids. The boy and the girl shows the scientist the titular magical box, he opens the box, they end up getting transferred to a fantastical world. During their adventures, the scientist bonds with the children, and also understands himself a little more.

I managed to capture certain parts of the play on video, mostly bad quality. But here is a video of its curtain call.

As you can hear at the end of the video, the performers and the audiences were rapturous after the play ended. The actors were mobbed by audiences for photos and autographs.

Jack Lai has managed to follow his sister's footsteps by acting. Here's a photo of him + his family... and me too. 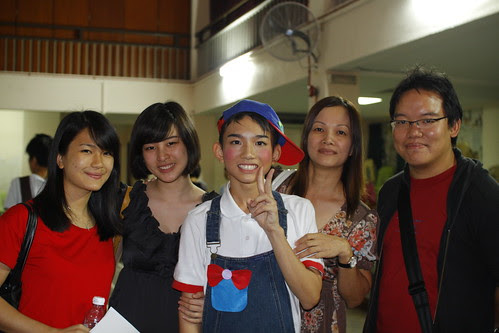 I thought the actress who played the devil (circus ringleader) was the MVP of the play. 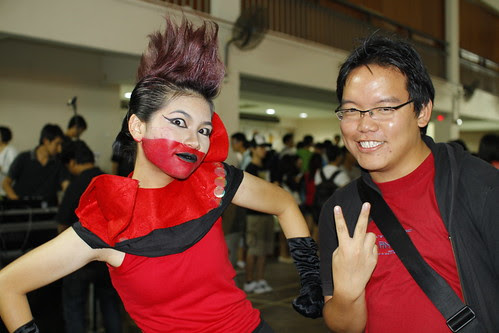 At times, I find it a little hard to believe that some of the actors were just high school students! Showing a lot of flair in their acting that seemed beyond their years.

To continue with the nostalgic theme of the previous post, I have to say that going to this play, which was fun for what it was, also became a trip down memory lane for me.

Dramas and stage plays played a prominent role in my life during my last two years in high school.

In 2000. I was in form 4, and had just taken over as president (or was it chairman?) of the English Language Club in school. One of the very first events organized by my club during my administration (yes, please allow me to self-aggrandize a little) was an inter-class Drama Competition for fellow Form 4 students.

Each of the classes came up with highly ambitious plays, almost like the sort in Wes Anderson's RUSHMORE. One did a Chinese martial arts costume epic in the vein of Crouching Tiger Hidden Dragon (Sebastian wrote it), another did an adaptation of Antony and Cleopatra (the actor who played the evil Octavius ended up winning acting honours and was definitely a show-stopper), there was an adaptation of King Arthur's tales (with intricately choreographed swordsfighting scenes), one did the Crucification of Jesus (it was Passion of Christ before Passion of Christ), and my own class did a riff on GREASE and other sorts of old-school musicals. It's a little funny that I can remember some of them so well even though it's been so long already.

The Drama Competition was a rousing success. There was even an article about it on The Star, thanks to our teacher-advisor.

Because of this, my club started to put together this grand plan of organizing a 'Drama Night', for the public. A gala night filled with glitz and glamour, where we would put together a series of plays, we started writing plays and collecting scripts. I remember that Sebastian wrote something called SEVILLE, a swashbuckling tale set in Seville, Spain. It had a feisty heroine and a bland love interest, and a mustache twirling villain.

I was at my Raymond Chandler phase back then, and secondary school was also defined by my endless repeated viewings of Casablanca, and wanting to be as badass like Humphrey Bogart. Early in my teens, I felt self-conscious about my large head because random assholes from school made fun of me. Then I saw Bogey, who, with his large head, exuded awesome coolness, and made beautiful women like Ingrid Bergman cry pathetically when they were to part with him and spend the rest of their lives with boring Victor Laszlos. 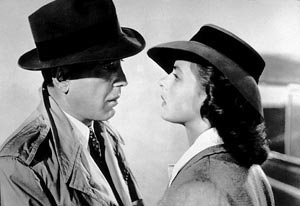 So I wrote a noir-ish tale of loss and woe set in the 1920-30s, complete with an ex-gangster (or private eye, I can't remember which) hero wearing a hat and trench coat. I vaguely remember the plot: The protagonist is in a jazz club, having a drink, a beautiful singer emerges on the stage and starts singing. The protagonist recognizes the singer as a former lover, feeling a rush of indescribable regret in his heart, he writes a note and hands it to the bartender, asking the bartender to hand the note to the singer once she is done with her singing. Protagonist exits the bar and roams through the atmospherically dark streets, sees a blind flower girl and buys a flower from her.

Then, as he examines the flower, he gets shot at from behind... because, well, you know, it's tragic. He collapses onto the ground, writhing in pain, then dying, while the singer is still in the bar, singing her heartbreaking ballad.

Next scene, the singer is seen at a train station, presumably waiting for him after reading the note, waiting for a someone who will never come. Story ends.

With sheer pompousness, I named my short play 'ADIEU'.

Finally, I could direct a play again! I thought gleefully.

There I was, during high school, constantly fantasizing about this event, about the plays we were to put together, I even thought of uniting all these plays with some time traveling angle, a time traveler as a Greek chorus. I imagined the audiences enjoying the night, I imagined the fun we would have, acting in these plays. We went around, looking for props, pondering about costumes, imagining those unattainable Form 6 beauties in school as my actresses. When high school was merely a series of repetitions, reviving the long-dead English Language Club, and the excitement I felt about the Drama Night, were the things that kept me going.

Alas, things were not to be. Summoned to a meeting with the vice-principal, I was told that the school wasn't going to allow the club to organize this event. I cannot remember the reasons, I only remember a crushing sense of disappointment, as if a hole had opened up beneath me, and I was spiraling endlessly into nothingness. There was this hapless rage towards the vice-principal, towards the school authorities, towards fate, towards my teacher-advisor, towards many things.

I walked out of the room, feeling that a part of me had just died. Thinking that perhaps, my childhood dreams of becoming a director had gone down in flames. Most of all, I felt this hatred towards them, for conspiring to stifle my creativity. The same 'them' who had confiscated my novels when I was reading quietly during recess time, the same 'them' who sadistically existed to ensure my suffering. The 'them' had never been anyone in particular, but an imagined embodiment where I would direct my rage at.

I attended Moon Lai's brother's high school play and found myself remembering this heartbreaking incident from ten years ago. Perhaps what I saw, was what the 'Drama Night' could have been like, if we had been able to pull it off, back in 2001.

Perhaps it was just wishful thinking. But let a man dream.

When I finished my term as club president (how lofty-sounding!), the general verdict given to me by the juniors who took over the committee, was that 'Edmund likes to dream... perhaps rather unrealistically'. I was mildly bemused by the negative connotation associated with the word 'dream'.

"At least I dared to dream, you brats." I answered bitterly within my heart, while giving them a friendly little grin.

I wonder what the 2001 me of high school would think of the present me? I'm sure he'd be awed that his diligence paid off, and that the childhood dreams of becoming a film director didn't really go down in flames at the vice-principal's office, I'm sure he'd be please to know that he became someone a little... awesome.

Did I just say that I was sure?