The last time I wrote about the Mid-autumn Festival (or Mooncake Festival) was in 2006.

It's pretty unbelievable that half a decade had gone by. I was in Perth then. On that day, I was shooting my final student film, GIRL DISCONNECTED. So confident with my talents back then, that I thought I was shooting THE definitive Mid-autumn Festival short film.

It was a fantastical tale of a girl who took a train to the moon to seek her love (whom she met on the internet), accompanied by a friend who secretly loved her. Mooncakes appeared in the film. So did Chang-er, and other mythological beings of the moon.


Yeah, the student short film didn't end up shaking the very foundations of cinema. But hey, when you were young, you thought you were invincible. (the film shoot caused me to burn out, I needed more than a year to recover from it before I made my first actual short, CHICKEN RICE MYSTERY) 5 years ago, I recounted my childhood memories of the festival.


"Mooncake Festivals had always been special to me, even as a child, nothing could beat the excitement of eating mooncakes and buying new lanterns, lighting them all up at my courtyard. Watching them glow brilliantly at night, and then looking around, watching how the other children of the neighbourhood were doing the same. Yeah, the beauty of the Mooncake Festival at night had always been unsurpassed in my mind.

I remember a stage was built near my house for a Chinese opera performance. I was a child then, I didn't bother to stay too long with my mother. It was hot and stuffy, mosquitoes everywhere, we ended up leaving early, just so we can go home, and I can be left with the lanterns. It's a fuzzy memory that I thought have long faded until I started writing this. I would've stayed and watch the Chinese opera now.

Even when I outgrew the lanterns, which was a sad thing, the Mooncake Festival remain an important family affair. For dinner, we have Chinese Steamboat, also known as Hot Pot. Occasionally we are joined by relatives, or family friends. Then we watch television, or take a walk outside, looking at the full moon."

Since I returned to Tokyo, I have spent the past few days editing someone else's film trailer (while preparing myself mentally to edit my latest short film).

So I decided to go to Tsukuba, which is almost an hour away from Tokyo. I may have visited it during a family trip more than ten years ago, but my memories are vague.

I arrived at Tsukuba in the evening, and found the place rather peaceful compared to the constantly chaotic Tokyo.

Tsukuba is actually known as Tsukuba Science City. According to Wikipedia, 'Tsukuba Science City represents one of the world's largest coordinated attempts to accelerate the rate of and improve the quality of scientific discovery.'

Hoh, no wonder it reminded me of Epcot Center (the one in Disneyland, it's now known as Epcot Theme Park, but I grew up knowing it as Epcot Center, so it will remain Epcot Center forever in my heart). This is Tsukuba Center. 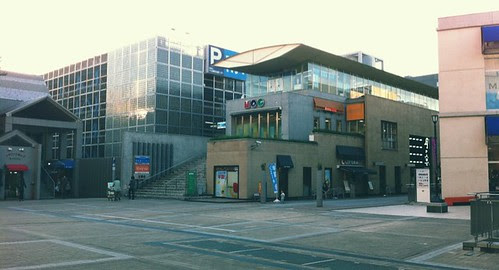 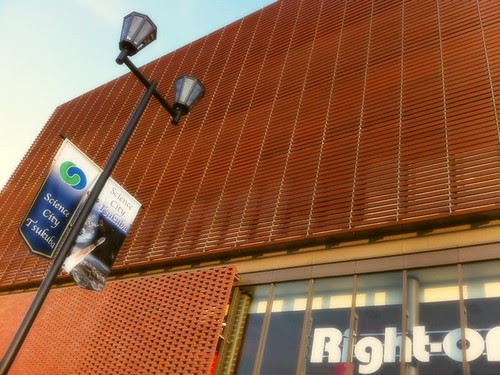 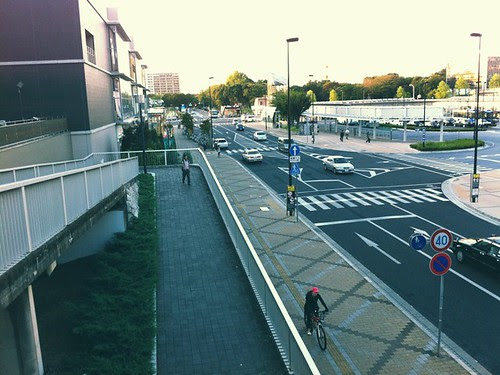 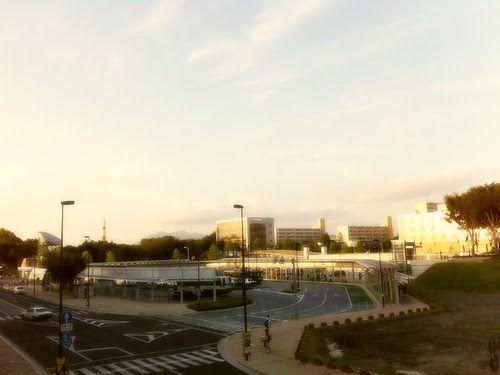 It had its charms. The sun was on the verge of setting, casting a gentle golden glow upon the sky. 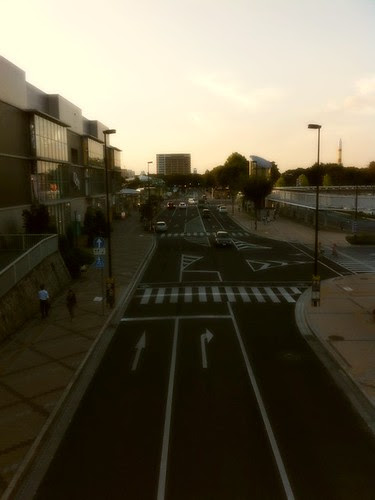 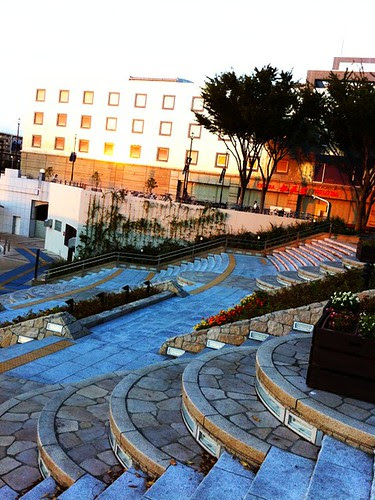 I sat at a nearby bench and watched people cycling and walking about. 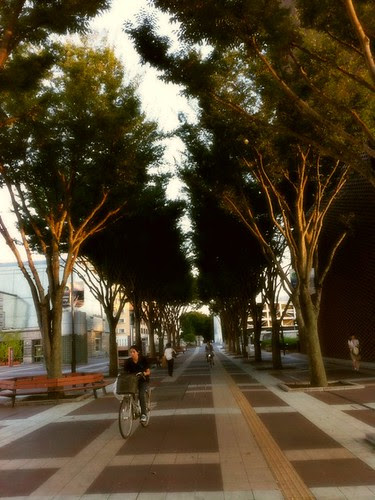 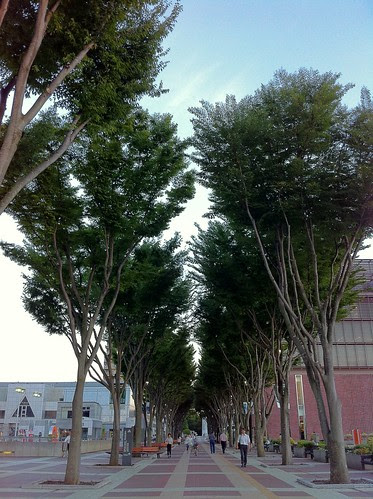 The row of trees were really nice. Wondered how it looked like, in black and white. Like a German Expressionist film? 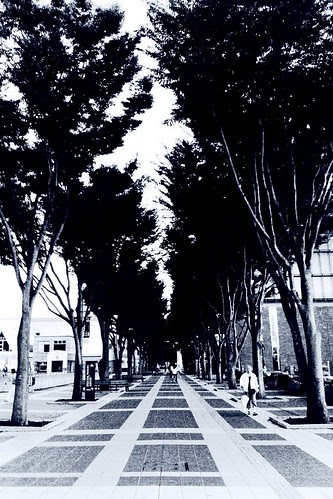 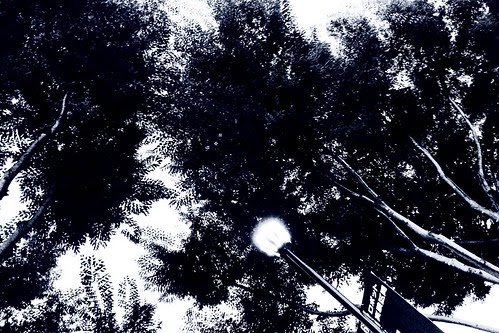 The sun was finally gone. 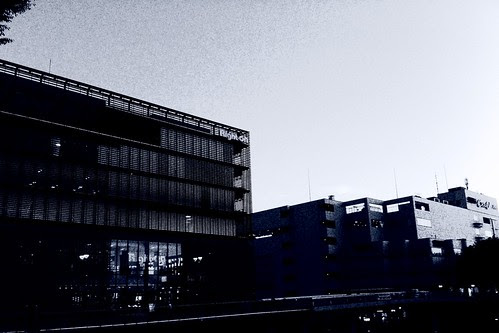 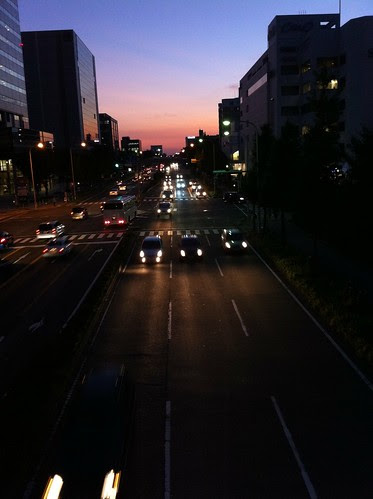 My friend finally arrived. We had dinner at a restaurant in a mall.

I had Karaage (fried chicken) 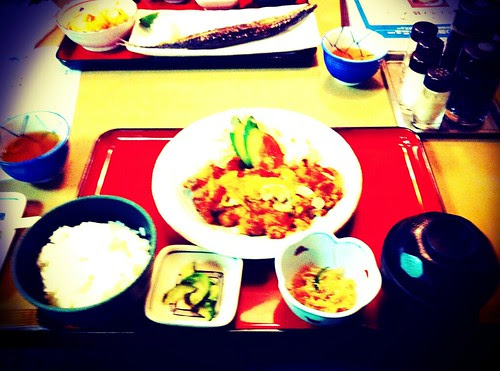 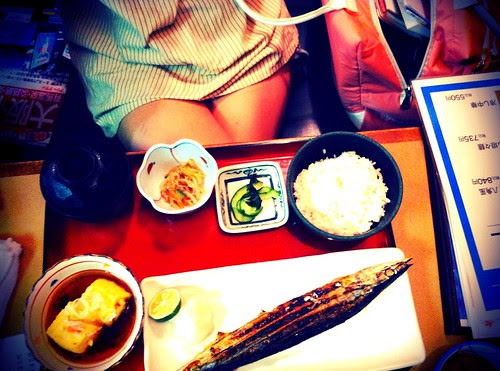 It was a good meal. She was planning a trip to Kansai with her visiting family. When she mentioned Kyoto, Osaka and Kobe, I cannot help but remember the little adventure I had during the the New Year of 2009. I went alone to the Kansai region at New Year's Eve, visiting (in this order) Kyoto, Nara, Osaka, and finally, catching the beautiful sunrise at Kobe, all in two nights. This was a trip that I would never forget, and would still tell people about.

Maiko the Producer is now in NHK Osaka, shooting another TV drama. I wondered how it went.

Just a month ago, a dear friend of mine whom I met back in Perth, Chimari, had also just gotten married in Kobe. I met her in 2005 when she was an exchange student. She, along with Ai, Iyo, Yuko, Noriko and (another) Maiko. They were all at her wedding ceremony. I wondered how that went as well.

We walked out of the mall, it was already night. I had to catch the train back to Tokyo. But before that, I looked, very briefly, at the full moon. 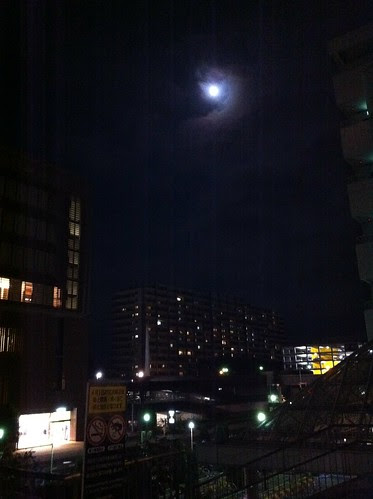