When I went to Jimbocho almost two weeks ago, towards the end of the Tokyo Film Festival. A book festival was being held, so there were numerous stalls at the streets, selling books. 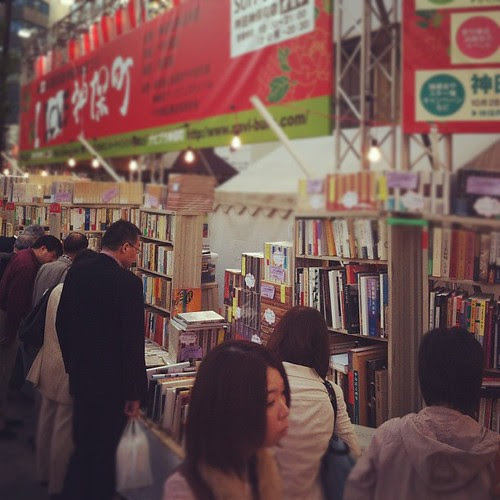 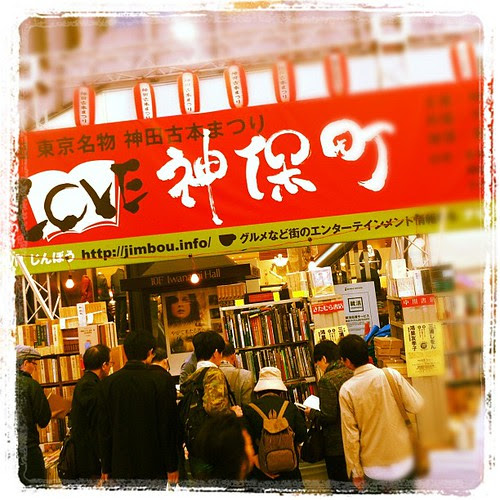 It was blissful experience, being in such a place. It was unbelievable that after more than 3 years in Tokyo, this was the first time I've visited Jimbocho, definitely a treasure trove for book lovers!

Using CNNGO's THE LAST ENGLISH BOOKSTORES IN JIMBOCHO article as my guide. I ended up at the famed 100-year old Kitazawa Bookstore (it's been around since 1902), and bought a number of books for around 1700 yen! 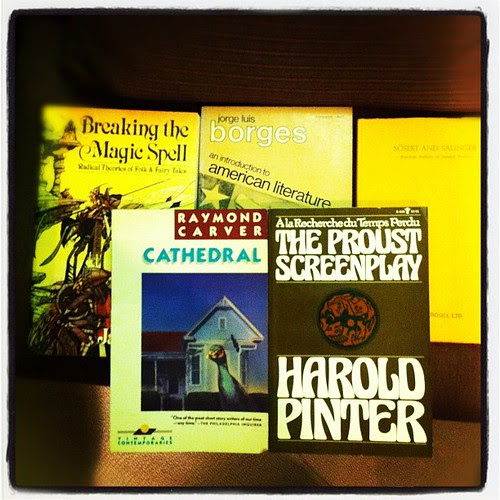 As I held on to Harold Pinter's unproduced screenplay adaptation of Marcel Proust's IN SEARCH OF LOST TIME (earlier translated as REMEMBRANCE OF THINGS PAST, which I preferred more), I found my own memories scattering to the past again.

6 years ago when I was in Perth, a guy named Vicks (not his real name, but sounds close enough) stepped into my apartment, looked around, and remarked that I looked like someone who wasn't into reading (nor writing). That was only the second time I met the guy, and he came to my place while tagging along with a friend of mine. I was momentarily outraged, wondering who he was to make such bold assumptions considering that I was doing a minor in English Literature (out of passion for literature), harboured dreams of publishing a novel (out of passion for writing) and had a shelf of novels in my room (collecting novels had been a lifelong thing) that was right in front of his face.

I pointed at the shelf of novels.

He said that his shelf was bigger.

I pointed out that I was doing a minor in English literature.

He said that it was 'merely a minor'.

And he then promised me that he would start recommending books to me that could make me write like a professional (like him).

I was momentarily repulsed, it's not everyday that you have someone march into your room, come up to your face and points out that you are semi-literate.

A few months later, Vicks ended up in the hospital because he circumcised himself with circumcising tools that he bought from a dodgy Korean dealer.

We Malaysians have quite a sense of humour. Growing up in secondary school, aside from having people make fun of me for having an oversized head, a supposedly large mouth ("you are an IBM, International Big Mouth, teehee!" was one of the more creative insults I heard when I was 13) puffy pouty lips (gorilla-esque, they said, Angelina Jolie-esque, I thought), I was also made fun of for always burying my head in my sci-fi/ fantasy books.

Now, having people joke of your physical shortcomings isn't a big deal, kids were kids. Why bear grudges, right? You have be an very sensitive (artistic!) individual to still remember all this, and write about this on your blog more than a decade later... oh, wait.

But one thing that bothered me a lot during my secondary school days, was the fact that it was illegal to bring a novel to school. Prefects were asked to confiscate novels, whatever novels they saw. At first I thought it was merely harlequin/ Mills and Boons romance that were being banned, but turned out that novels in general weren't allowed too.

So a couple of times, while reading a book quietly during recess, I would have some prefect snatch the book away from me.

"It's just a book!" I protested.
"It's fiction." The prefect shrugged.

The prefect ran off. And I would have to go home and write a letter (in my parents' names) to get my book back.

So, having people make fun of my physical shortcomings is one thing, to be PUNISHED for loving literature was another. I felt that I was living in the dystopian world of FAHRENHEIT 451, where the school's role wasn't to cultivate any love for the arts and culture, but merely to make students perform well academically. Clearly that wasn't what the Malaysian education system is about, right? Right? Oh, wait.

Meanwhile, girls flocked to the 'cool' kids. Meanwhile a birthday present I gave a girl was rejected (or rather, she passed it to my class monitor, my class monitor insensitively returned it to me in front of the entire class. Well, at least my classmates were mostly sympathetic of my plight).

I digress again. I was visiting Jimbocho with the smash hit Taiwanese film YOU'RE THE APPLE OF MY EYE by Giddens Ko still fresh in my mind. (one of my favourite films from this year's very stellar Tokyo Film Fest), hence I allowed myself to indulge upon memories of my own high school and university.

High school is joyful... when you're the hero in the story. Not me.
University was fine... when you don't run into people who circumcised themselves with cheap circumcision tools and end up in hospitals.

I returned to Jimbocho again a few days later with my dad. My dad was visiting Tokyo during the film festival, and it was his last day here. 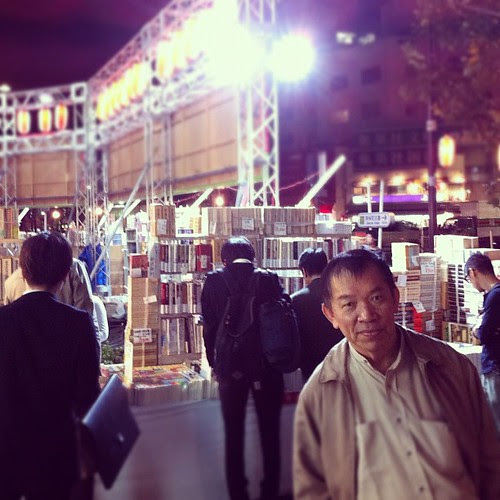 The Disk Union in Jimbocho, apparently, was a great place for him to look for CDs, and as he was doing that, I walked past a few of the stalls at the streets again. Picking up numerous books. I then saw a stall that seemed to specialize mostly in Nabokov books.

When I flipped through one of his biographies, I saw an old newspaper cutting kept between the pages, folded nicely, and already turned yellow due to age. It was his obituary from 1977. 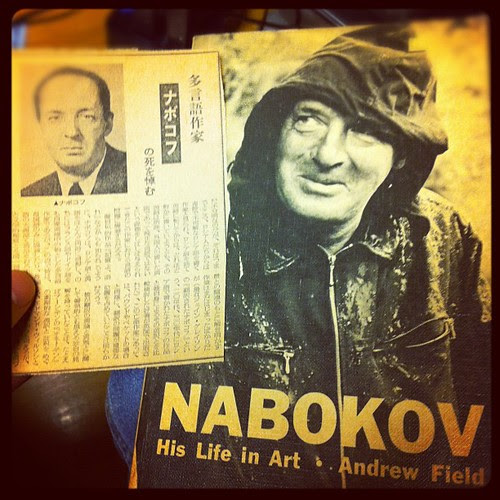 Two months ago, the death of Borders made me reminisce about my childhood experience hanging out in the mega stores . But then, maybe the book business is really going full circle, from small-village bookshops to big-box bookshops, then back again. Just like those the small, old bookshops that populate Jimbocho. It's a comforting thought.
Email Post