After a few days of shoot in Taipei, and then another few days in Hong Kong for the post-production session, I returned to Tokyo for half a day, before making my way back to Malaysia for Chinese New Year.

It was the morning of January 20th. Tokyo was snowing for the very first time in 2012.

However, instead of the intended morning flight at 10:30am, some, er, stuff happened.

@flipcritic I suffered through more than just a short stopover. flight changed from 1030 to 2200 because of some miscomm with travel agent
— Edmund Yeo (@greatswifty) January 20, 2012

@flipcritic miscomm when I queue for check in and realized that the flight was never booked and the printout I had was just a schedule
— Edmund Yeo (@greatswifty) January 20, 2012

Yes, basically, I realized that there was a miscommunication with the travel agent and my flight ticket was never reserved! (I received an email more than a week earlier but that was really just a pending book which needed my personal confirmation... etc etc) It was horrifying to realize that only when I was at the check-in counter.

But I managed to fly in the end. Catching the 10pm flight instead.

At least the seats were empty.

I love it when this happens. twitter.com/greatswifty/st…
— Edmund Yeo (@greatswifty) January 20, 2012

So I arrived in the early morning of 21st Jan.

And today, on the 22nd of January, Chinese New Year's Eve, I'm having my usual simple reunion dinner at home with parents and sister. 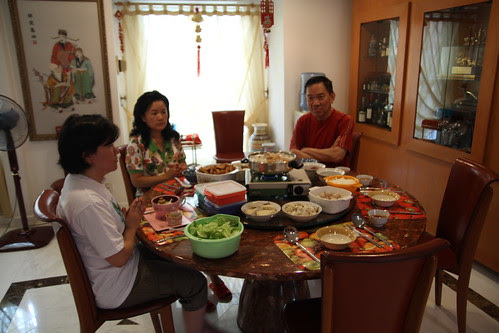 In 2010, I took more photos during my reunion dinner.

This year's simpler. Just a short video of our dinner to let you have a look at how I usually spend my Chinese New Year Eves.