Last week, just a day before I headed off to Ningbo China for a short trip over the weekend, I walked past the nearby arthouse theater Waseda Shochiku and paused when I noticed that they were screening three Theo Angelopoulos films in a span of two weeks. 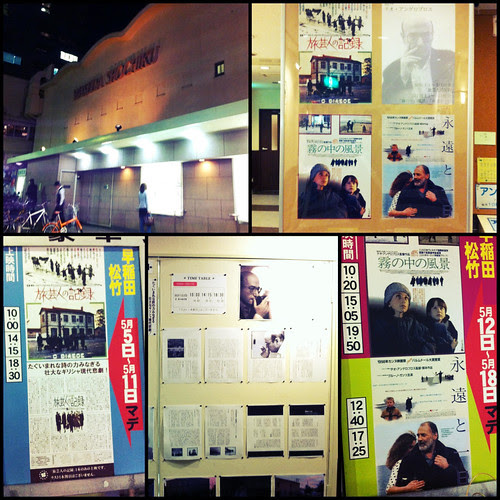 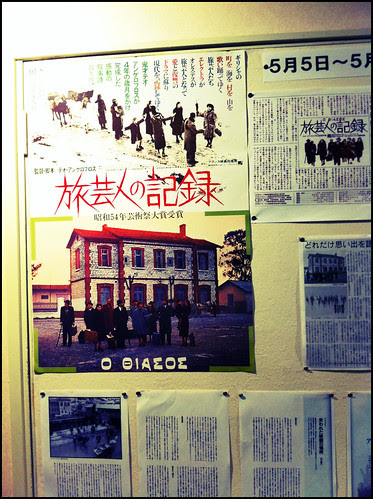 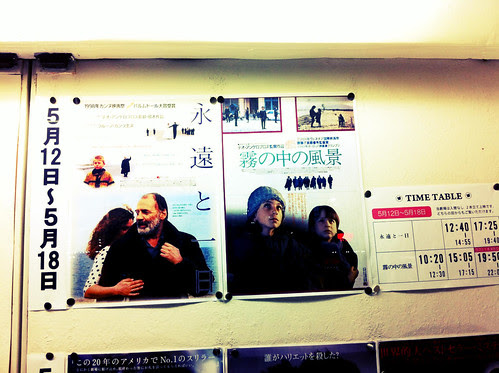 I went into the cinema, looking around, hoping that there would be copies of the Japanese film posters around, unfortunately, they were none. (Japan usually promote their films in the form of A4 sized flyers, called a "chirashi", I have made some for my own films before, and often collect them)

Angelopoulos' films had always been rather critically well-received in Japan. Aside from limited arthouse releases in the country, they had won some local awards too. THE TRAVELLING PLAYERS received a Best Director For a Foreign Film from Kinema Junpo, while ULYSSES' GAZE (1995) was Mainichi newspaper's Best Foreign Film winner.

Japanese obituaries of him written during his untimely death in January were posted on the bulletin board. 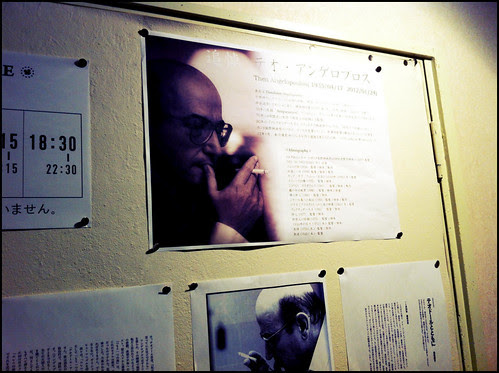 I wrote about my remembrance of Theo Angelopoulos back in January, shortly after his death, recounting how I discovered him by stumbling into a DUST OF TIME (which would end up being his final film) press screening at Berlin Film Festival 2009. Although I didn't really like DUST OF TIME, there was something fascinating about it that made me dig out the rest of his filmography. And that was the beginning of a beautiful friendship with his films.

Here's what I wrote then:

"...his style was very distinctive, somewhat Tarkovskian because of his meditative long shots and contemplative tone, yet different at the same time in terms of the recurring visual motifs and themes. Less bleak and more wistful and melancholic, maybe.

He, along with Tarkovsky, Bela Tarr, Wong Kar Wai and Edward Yang, are the few filmmakers I referenced most when I prepare for my film shoots.


So far, I have seen eight of his films. (aside from the aforementioned three, I have also seen ULYSSES'S GAZE, THE BEEKEEPER, ALEXANDER THE GREAT, THE SUSPENDED STEP OF THE STORK and THE WEEPING MEADOW) I don't necessarily love all of them, yet I always loved the fact that he was aiming to do something ambitious and monumental with his films, he would try to give his films this novelistic depth and sweeping scope, constantly revisiting his own past while depicting the history of his country, which were probably filtered by his own memories.

Every time I think of his films, the great music of ETERNITY AND A DAY (probably my favourite of all his works) would play loudly in my mind. His films would never be the same without Eleni Karaindrou's soundtrack.

Along with those grand, goosebumps-inducing moments from various different films (that are usually accompanied by majestic music from Eleni Karaindrou).

The separation of the lovers in THE WEEPING MEADOW.

The ending of SUSPENDED STEP OF THE STORK.

And the ending of ETERNITY AND A DAY.

I have struggled with whether I wanted to catch the ETERNITY AND A DAY / LANDSCAPE IN THE MIST double bill during the last few days. Today, I decided that I really wanted to go and was about to leave until I checked the theater schedule and realized that the screenings ended two days ago. (it's now a GIRL WITH A DRAGON TATTOO / LET ME IN double bill). And now I feel a hint of regret because I had wondered what the two would look like on the big screen since I've only viewed them on small computer screens via my DVD (which had some pretty bad-quality transfers. Blu-Ray releases of his films would be great)

While most would say that Angelopoulos's best films were the ones he made during the 70s and 80s, I probably like his latter-day works more (minus DUST OF TIME) because the melancholic themes of regret and alienation are more apparent, while the harmonious convergence of past and present, dream and reality, appear more frequently (he often had scenes where the protagonists encounter ghosts of his memories and people from his past in a single continuous shot). The latter films were less rooted in realism, they are more spiritual and mystical, more dream-like.

I'll end this post by sharing a documentary of his.