ONCE UPON A TIME IN CHINA film series were cinematic masterpieces

It all happened yesterday evening, when two friends of mine were reliving memories of old Jet Li films on Youtube.

The first film they were looking at was the 1993 film TAI CHI MASTERS which co-starred Michelle Yeoh... and it was DUBBED IN ENGLISH! Yes, the entire film is on Youtube, but out of principle, I'll just post a clip from its climatic fighting scene in original Cantonese.

(The English dub version was horrifying not only for its campy voice acting, but for the total replacement of the soundtrack. How can I ever accept an early Hong Kong film without the endearingly intense synthesizer music I hear above?)

I saw this film with my dad almost 20 years ago when it just came out in the cinemas, I cannot imagine it's been that long ago! But looking at the fighting scene, I was struck by how kinetic the camera movements were back in the day (obviously this wasn't something a 9-year-old me was able to notice).

However, despite its merits, I never really thought of Tai Chi Masters as an essential Jet Li film (although the film's main novelty value was pairing him with Michelle Yeoh).

For most Malaysians my generation, we were first introduced to Jet Li as the folk hero Wong Fei Hung in Tsui Hark's seminal ONCE UPON A TIME IN CHINA series. A series of 6 films (Jet Li was momentarily replaced by Vincent Zhao for the lead role in the 4th and 5th films of the series)

The first ONCE UPON A TIME IN CHINA film came out in 1991. I was 7. The martial arts scenes blew my mind. I saw the film with my parents, those were the good days when we could just march into a big old theater near my house in a lazy sunny Sunday afternoon to catch a film. I would know nothing about the film, and then walk out having my entire life changed.

The sheer heroism of Wong Fei Hung, the beauty of 13th Aunt (the love interest) played by Rosamund Kwan, the zany antics of Wong Fei Hung's disciples like the morally conflicted Leung Foon (Yuan Biao), the stuttering "Bucktooth" So (Jacky Cheung) and "Porky" Wing (Kent Cheng). In fact, the three disciples were iconic in their own ways, having numerous spin-off TV series that centered on them (but played by different actors) It was indeed a film that appealed to old and young, and the ladder fighting scene was something I've never ever seen before. Just like how some people's childhoods were defined by the memories ET on a bicycle flying over the moon, this ladder fighting scene was an image from my childhood that stuck with me.

THIS is the climatic fighting scene between Wong Fei Hung and a rival kungfu master Iron Yim, who had fallen into hard times and was forced to sell out by working for the corrupted government (or something like that, based on my vague memories of the film)

ONCE UPON A TIME IN CHINA 2 was released the following year. This time, Wong Fei Hung takes on evil cults. This is him fighting the White Lotus sect leader played by Hung Yan-Yan (also known as Xiong Xin Xin), who was supposedly "invincible", until Wong Fei Hung proved him wrong.

It had Donnie Yen as the big bad (as a corrupted official, I think he wasn't. He played a Qing Dynasty loyalist who wanted to stop Sun Yat Sen's revolution. Thanks to Simon Seow for pointing that). Look at how, towards the end of their fight, Donnie Yen's character transformed wet towel into a deadly spear-like weapon. Whoa.

Donnie Yen and Jet Li would meet again exactly ten years later in the 2002 film HERO by Zhang Yimou. Once again, Donnie's character would use a spear, do you think it could be a homage to their fighting scene in ONCE UPON A TIME IN CHINA 2?

The early 90s was indeed a great period to be a fan of Hong Kong martial arts films, especially when Wong Fei Hung films were coming out every single year. Somehow 1993's ONCE UPON A TIME IN CHINA 3 was my favourite back then. (The entire film is available on Youtube. Though, again, I highly recommend you to watch this in better quality)

Because it introduced the badass antihero character Clubfoot (in Chinese, his name is literally translated as "Ghost Foot Seven") played masterfully by Hung Yan Yan again (since no one really recognized him as the White Lotus sect leader in the previous film, I guess. I sure didn't back then.)

This is the very first scene of Clubfoot, and it's one hell of an introduction. In this scene, he fights Wong Fei Hung's dad (who is obviously an accomplished martial artist himself). His fighting style relies solely on powerful kicks.

Clubfoot has a dramatic character arc, beginning as a cocky lackey of the Big Bad, and then, after a tragic turn of events, he gradually became a good guy, joining Wong Fei Hung and gang in the end to take part in the epic lion dance competition.

And the lion dance competition was Hong Kong cinema at its finest. The exhilarating editing, where it intercuts between the competition itself and the other subplots, the hundreds and hundreds of dancing lions that Wong Fei Hung had to battle. I never saw anything like that in cinema before, and I'm not sure whether I will ever see anything like this again.

ONCE UPON A TIME IN CHINA were not just simple chop-socky films, they were cinematic epics that depicted patriotism, honour and chivalry in the hearts of heroes, as they battled against the inevitable twin forces of industrialization and westernization. They were such fine films to watch back then, either alone, or with family. In a better world, their statuses in the history of world cinema should be reevaluated.

I saw each of the three ONCE UPON A TIME IN CHINA films more than just a few times, either with friends, or with family, with cousins, we would just sit and laugh at the comedic moments, cheer at the fighting scenes, be swept away by the romantic portrayal of the past where heroism was so beautifully pure and badass.

Many years later, when Ang Lee's CROUCHING TIGER HIDDEN DRAGON came out, and then the aforementioned Zhang Yimou's HERO, they weren't exactly popular with the mainstream audiences. I guess probably because these films had a more arthouse sensibility, and a languorous pacing that people who grew up with the ONCE UPON A TIME IN CHINA films were uncomfortable with. I like CROUCHING TIGER and HERO in my own ways, and for what they are, but re-watching scenes from ONCE UPON A TIME IN CHINA again, I do feel quite nostalgic towards the days when my Chinese New Years were all about Wong Fei Hung and friends.

Jet Li would return to the Wong Fei Hung role again in 1997's ONCE UPON A TIME IN CHINA AND AMERICA, which was directed by Sammo Hung and Lau Kar Wing instead of Tsui Hark. It's a decent film, and this time, Wong Fei Hung took on evil cowboys. (watch out, this video is dubbed in French!)

But I don't think it had the complexities and brilliance of the original Tsui Hark trilogy.

Treat this as an afterword.

A short while after writing the above post, I feel compelled to also share the fact that in the past few years since I became a filmmaker myself, I had the honour of meeting Mr. Tsui Hark in two different occasions.

The first time was Dubai International Film Festival 2008, the very first film festival I was invited to as a director. Tsui Hark was there to receive a lifetime achievement award at the closing ceremony.

I managed to take a photo with him, my dad was there as well. 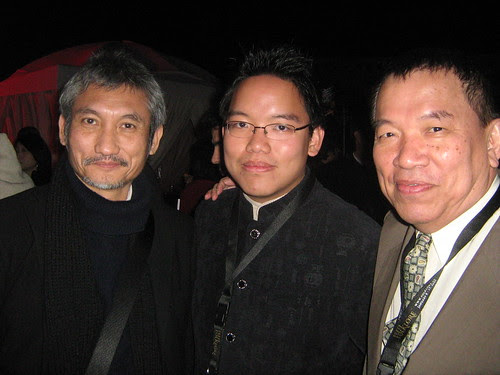 In another photo with him, Brigitte Lin appeared in the background! 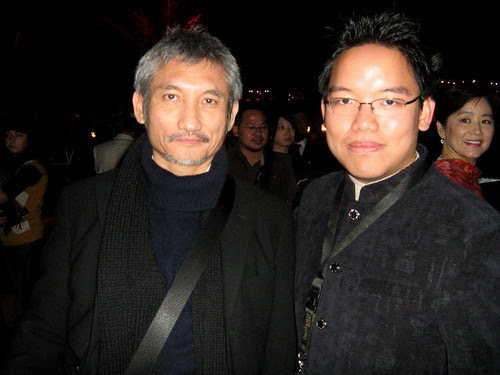 It was so loud that I was unable to speak to him then.

I would meet him again three years later, at last year's Shanghai International Film Festival. He served as jury president of the short film competition, where my short film, EXHALATION, was competing.

(I never really got to speak to him in both occasions)

It's mind-boggling. Even in my previous post about the festival, I wrote: "the idea that a guy whose films I grew up watching had managed to catch one of my short films is quite a different, and astounding, experience."

But what I didn't realize until now was that, the Shanghai Film Fest happened exactly twenty years after I saw the first ONCE UPON A TIME IN CHINA.
Email Post
Labels: Film Reviews Jet Li Tsui Hark