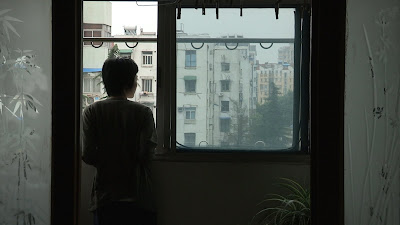 The Tokyo Filmex ended a few days ago. I was surprised that I had managed to catch all three of the award-winning films. (well, except Kim Ki-Duk's PIETA, which won the Audience Award)

MEMORIES LOOK AT ME 记忆望着我 by Song Fang 宋方 is a Chinese docudrama that received the Special Jury Prize at Filmex. It was also the Best First Feature award winner at the Locarno Film Festival.

The film begins with Song's return from Beijing to her hometown in Nanjing. Almost the entire film is set in her family apartment, with her hanging out and conversing with her parents. There are occasional visits from her older brother's family, a precocious young niece who seems disturbingly wise and articulate beyond her years (but not in a Hollywood manner, of course)

On paper, this would not be the type of film that I could last through without feeling sleepy, but once I allowed myself to immerse within its hypnotic pace, I found myself being swept gently away by its gentle warmth. (let's just say that I handled this film much better than I did with the two Amos Gitai films I caught in the festival, more on that in another post)

Perhaps this is because there are many things about this film that I can relate to. Because I feel the same every time I return to Malaysia. The conversations with parents while dining, the reunions with friends and relatives, the attempt to reconnect with memories of the past. Time has been moving endlessly when I was gone, yet when I was there, each day blends with another, as if I am floating in a (sometimes pleasant) state of immobility. It's like taking a time machine to my past, yet the past that I remembered has been replaced a little by something else, and it takes a while to adjust to them. Homecoming can be rather pleasurable, but sometimes they reopen old wounds.

The conversations in MEMORIES LOOK AT ME revolve around the friends and family around them, as Song tries to catch up with what has been going on since she left, yet the pall of death hangs over her as well. The daughter of family friends is dying of cancer, she is only in her 40s, when Song and her parents visit these friends, the moment is moving and genuine. They try to skirt around the issue of their daughter's inevitable death, being as optimistic as they can, yet they find themselves remembering the death of another person decades ago.

Some of you might know that back in July, when I returned to Malaysia, my maternal grandmother passed away. My mother comes from a large family (she has 8 siblings), the funeral was quite a large affair. In the days leading up to the funeral, I listened and observed the conversations of my uncles and aunts, my cousins. Many of them, by going through their memories of my grandmother, were actually going through memories of their own past.

Song Fang's film blurs the line between documentary and drama. I believe that it is documentary in a way that everyone in the film are playing themselves and that most of the things that they say, their personal experiences and memories are authentic. But what is staged? During the Q and A session, Song Fang has explained the meticulous preparations she had made with the cinematographer, which can be seen onscreen. This film does not look like a low-rent home video shot on iPhone, nor does it look like something she put together in a few days. Each shot was composed nicely, the sound design is done very well, everything about it is quite polished. Which, I think, does a lot more justice to her subjects. (somehow, production and technical values of an independent film are often overlooked these days)

This film is an intimate slice-of-life portrait of Song Fang's family. There is never any heavy-handed pompousness that she injects upon her film, nor any blatant attempts to parallel the plight of her family with the sociopolitical identity of her nation like some directors would do in such a material (of course, the subtext is there, you can still see that the interaction between different generations reflects the different upbringing and environment that each of them has to go through). Maybe because of this, her family and friends seem just like my own, and with that, it allowed myself many moments of self-reflection.