All I had was this blog. Which was created during my time there.

I used to carry a camcorder with me most of the time then, taking videos, editing them (yeah, my editing was self-taught), and carrying my laptop around to different houses hoping someone I know would watch the videos. Perth was probably the place where I picked up photography. Life was quite different back then.

Last Friday, my parents and I flew to Perth to visit my sister, who is currently studying there. We were supposed to celebrate Chap Goh Mei together (the 15th day of Chinese New Year).

On Saturday, I visited Fremantle. Some of my fondest memories of Perth were in Fremantle (technically, Fremantle is considered a different town in Western Australia). My solitary trips here had been to look for inspiration every time I felt crippled by loneliness. The Fremantle Market itself on Friday nights is a wonder, the CD shop, the live performances, the food. And the lights.

My final student film had a scene shot at Fremantle Beach. That was 2006.


In 2005, I also shot a video in Fremantle, when I was there having my farewell lunch with my friend Ying Zee, who was returning to Malaysia then. She was like a sister to me, and had just gotten married recently, great job!


There were more videos, but I've lost them.

Seven years have passed, during this visit to Fremantle, I had two camera phones with me (my Japanese iPhone and my Malaysian Android phone), and also my Canon 7D.

And you are looking at these Canon 7D photos (and videos) now. I wondered whether my eyes now are different from they were 5 years ago.

The first place I went to was Fremantle Market.

On weekend afternoons, the place is bustling with life. There is always a live performance at the Market Bar. 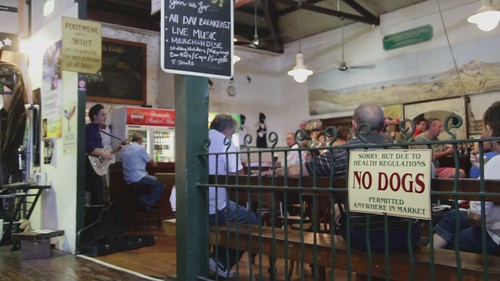 Meanwhile, there are, apparently, 150 shops for craftspeople, fashion designers and merchants at the historic Hall (historic because this place's been around since 1897, and had been entered onto the Register of Heritage Places).

I don't remember ever buying anything from the CD shop, but I liked hanging around sifting through the CDs, because the songs the vendor played were usually soothing. Especially at night, when he went for the jazz stuff.

Another of my favourites in the market was the famous Michele's Crepe Suzette. The place is an institution. 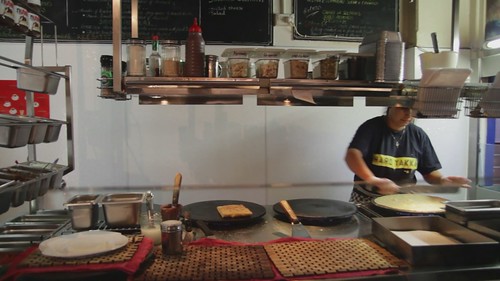 Next to Michele's Crepe Suzette was an unfamiliar sight. A ramen stall called Dosukoi. Established in 2007, a year after I have left Perth.

I also saw a sushi stall.

Heartened by the widening Japanese influences in the place, I approached the sushi stall and spoke to the two young women tending the stalls in Japanese, unfortunately, they couldn't understand what I said because they were Koreans.

Moving past the Hall, I arrived at the Yard area of the Market, which was for, mostly fresh food producers, food retailers, vegetable growers.

I walked out of the market, and stopped for a few moments when I saw a guy playing his guitar with sticks. 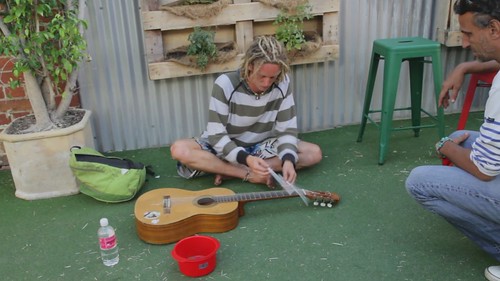