I'm at Kansai Airport while I'm writing this, waiting to fly away.

Yesterday, I visited the famed Ginkakuji Temple and took a stroll through the Philosopher's Path. I wasn't sure what to expect from this solitary journey, except to be alone with my thoughts as I absorb the sights, the sounds, the scent of this historic place.

There were some temples and shrines along the way, I decided to pick one randomly to visit.

I saw the sign for Honen-in Temple 法然院 and followed. The temple is at the foot of Mount Nyoigadake, and as I approached it, the air around me suddenly become much cooler and soothing, I wondered why. Was it because I was shaded by the trees? It was as if the temperature had dropped 5-6 degrees, I didn't know what was going on.

From the distance, I watched the Sanmon Gate, the main entrance to the temple. I was struck by how photogenic it was.

As the three continued standing at the gate, I mentally invented a story for them. 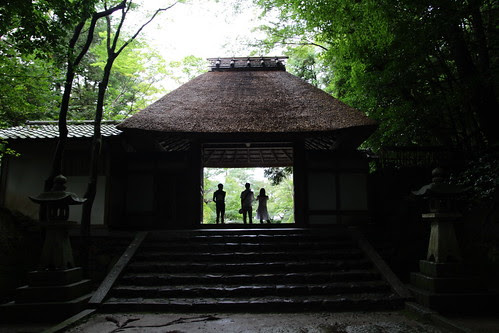 I entered the temple and found myself captivated by the droplets of water, falling gently from the trees and onto the tranquil carp pond, momentarily creating ripples that extended to everywhere and nowhere at once. Yet the reflection of the trees and the temple building remained perfectly clear on the surface of the pond, seemingly enhanced by the ripples. 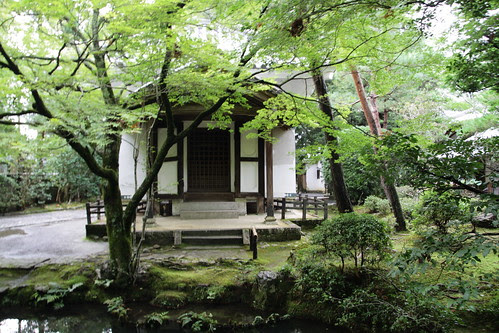 If I were a character in a Terence Malick film and were about to whirl around with the trademark Malickian voiceover musing melancholically about life and becoming one with nature, that moment would be it.

The moss-covered fountain in the garden of Honen-in fascinated me, the arrangement of the flowers were so delicate and perfect that I feared that a strong gust of wind would throw them off. But I felt nothing but a cooling breeze.

I moved on and saw the Jizo-do, a cave for the Jizo Buddha statue. The Jizo Buddha is the protector of children, expectant mothers, firemen, and travelers. Most of all, he is the protector of deceased children, including miscarried, aborted or stillborn infants. In Japanese folklore, Jizo hides the children in his robes to protect them from demons and guide them to salvation. 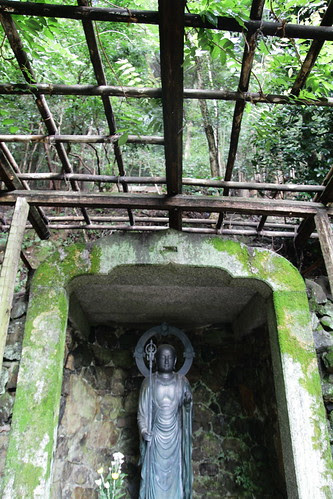 After I left the temple, I started reading the wooden sign at the exit, which provided a detailed history of the temple.

I then learnt that Honen-in Temple is the final resting place of Junichiro Tanizaki, one of my favourite Japanese writers.
Email Post
Labels: Kyoto