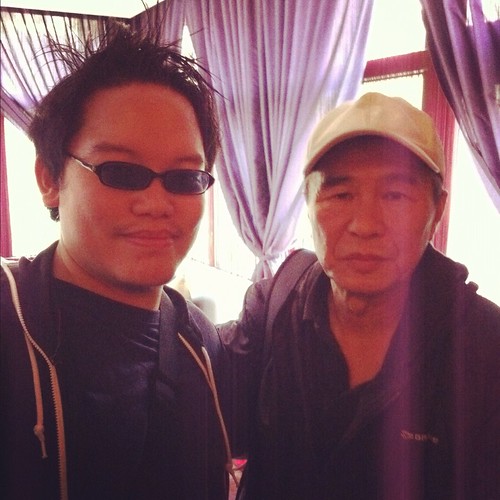 I'm ashamed to admit that prior to the beginning of this month, I have only seen two Hou Hsiao-Hsien films, and both are his latter day works: MILLENNIUM MAMBO (2001) and CAFE LUMIERE (2003).

Every time I watch MILLENNIUM MAMBO's opening, my heart flutters.


In order to rectify my lack of knowledge regarding Hou Hsiao-Hsien's body of work (and also for filmmaking reasons), I decided to go on a Hou Hsiao-Hsien marathon of sorts. I have heard that his best works are the ones from the 80s to 90s, those were times when he was more interested in making films related to Taiwan's history.

I started with A CITY OF SADNESS (1989), which won the Golden Lion at the Venice Film Festival, the first Taiwanese film to do so.


It's a meticulously-crafted family saga that happens in a span of a few years, depicting what is known as the "White Terror" and how it affects each of the family members.

What captivated me was the use of flashbacks, the blurring of past and present. That is a sudden flashback scene of a long deceased Japanese man enjoying his student life, and writing a letter. There is also a scene of a street opera that comes in right after it is being described by a character as a memory of his childhood. Is that a memory? Or is that something that really happened?

The film is dense and novelistic, bringing you deep into the memories of the characters, their past and present. I love it because this is what interests me as a filmmaker as well.

In this clip, Hou Hsiao-Hsien explains why he has Tony Leung in the film (before this, he was using mostly amateurs in his film). It's really mostly for pragmatic reasons. Because the budget of his film is higher than before, film investors asked Hou to cast a famous actor, hoping for Hong Kong distribution. He also explains Tony Leung's love for books

I followed that with 3 TIMES (2005). 3 TIMES is glorious because of the screen goddess Shu Qi.

Alas there is no duck face.

3 Times is divided into three stories set in different eras, but all starring Chang Chen and Shu Qi. Are they reincarnations? Or perhaps the film is to depict the difference of romance in different times. The first segment, set in the 60s, is by far my favourite in the film. The bonding of him and her over snooker, his desperate search for her after his military service (where "Smoke Get In Your Eyes" play in the background, an instant win)

This is the opening scene of the film.


After 3 TIMES, I watched DUST IN THE WIND (1986). It's a very different sort of love story from a Hou Hsiao-Hsien in a different time.


More minimalistic and simplistic than his subsequent films, more of a neo-realism work, it follows the lives of a young couple from a village who move to work at Taipei city after high school. Unfortunately, reality catches up with them. They have to separate because of his mandatory 3-year military service. The film ends with a letter that the boy Ah-Yuan receives from his brother. From there he learns the fate of the girl, Ah-yun. It is devastating.

There is also a flashback sequence that occurs in the form of a dream, where the boy was a baby and his father and grandfather has a conversation.

GOOD MEN, GOOD WOMEN (1995) is the last instalment of a trilogy that begins with A CITY OF SADNESS and continued with THE PUPPETMASTER, its structure is rather complex.

The film depicts the real-life story of the revolutionary Chiang Bi-Yu (played by Annie Shizuka Inoh). From her anti-Japanese resistance efforts during World War 2 and her subsequent experience during the "White Terror".

It also tells the story of a modern day actress (also played by Annie Shizuka Inoh) preparing for a role as Chiang Bi-Yu in a film. Her everyday life is empty and meaningless, but she constantly has flashbacks of her deceased boyfriend prior to his death 3 years earlier.


Therefore the film intercuts between Chiang Bi-Yu's storyline and the actress's. Are those scenes of Chiang Bi-Yu from the film within a film? Or are they imaginary scenes of the actress as she prepares for the role? Or perhaps she is the real Chang Bi-Yu, and the film is to show the parallel lives of two different women in two different eras. Individually, each story arc is simple, but put together, they are structurally complex and thought-provoking. Like a cubist novel. Like Faulkner's works.

After that I decided to complete Hou Hsiao-Hsien's historical trilogy with THE PUPPETMASTER (1993). The film is based on the memoirs of Li Tian-Lu, covering the years from his birth in 1909 to the end of Japan's fifty-year occupation of Taiwan in 1945. By then, I recognize Li Tian-Lu for playing the grandpa in A CITY OF SADNESS and DUST IN THE WIND.

Essentially a biopic, with interviews of Li Tian-Lu himself interspersed throughout the film, his recollections driving the film forward. The film is amazing because it shows in detail that era of Taiwan, and also the puppet shows that Li Tian-Lu puts up.

In all honesty, I find myself learning quite a lot about Taiwanese history thanks to this trilogy.

The most recent Hou Hsiao-Hsien film I watched is A TIME TO LIVE, A TIME TO DIE (1985). It's an autobiographical (I think?) film that revolves around Ah-Ha (Ah-Hsiao) and his family: father, mother, grandmother, older sister and three brothers as they adjust to life in Taiwan after migrating from Mainland China.

It is seemingly made of vignettes from their everyday life. Its frank portrayal of death in a family cuts deep into my heart.

But what lingers is a beautiful sequence where Ah-Ha and his grandmother spends an afternoon together. This sequence can be seen in this video:


My love for cinema comes from the fact that they sometimes allow me to reflect upon my own life. It's the reason why I watch films, and make films, to express things that I cannot put into words, to share memories of my life that I try to interpret with my imagination. Watching this scene, I somehow find myself remembering my own late grandmother.

I think I will continue my marathon one of these days.