- January 19, 2014
I was in Taipei from the 6th to the 11th of January. It's been a week since then, but only now I'm digging through my 7D's CF card to see what photos have I taken. Actually it wasn't a lot, just a few from the famous SPOT - Taipei Film House that I went to with dad and sister on my first day there. (it's also where I discovered the local band LIGHT ENGINE, which I recommended in a previous post)

Most of the time that day I was just taking photos with my phone.

I even saw a film, a documentary called BEYOND BEAUTY: TAIPEI FROM ABOVE, before I caught the flight home.

The night before (my very last night in Taipei), I headed off to the Songshan Cultural and Creative Park 松山文創園區 to meet a friend at the newly-opened Eslite Spectrum Songyan Store 誠品生活松菸店. As I waited for her to finish work, I wandered around the park itself. 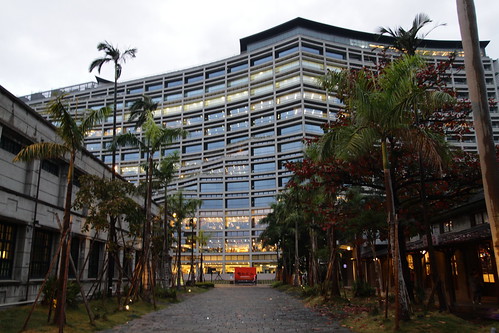 An Old Master Q (老夫子) exhibition was being held to commemorate its 50th anniversary. Old Master Q is a comic from Hong Kong that I grew up reading.

I was so tempted to hop onto the Old Master Q bus, or buy a ticket to check out the exhibition. Just because.

There is a place called the "Tobacco Factory" which was once a tobacco factory but had since been converted into a place for art and photo exhibitions. There were two photo exhibitions by a photographer, one were photos of his travels around the world, the others were photos of his late mother throughout her entire life. The latter captivated me, his mother was a famous novelist, but somehow I cannot remember their names (the photographer and his mother's)... nor find any information about this exhibition on Songshan's official website. It's very strange.

I walked past the baroque garden as the sky was darkening.


I always love visiting one of these big Eslite bookshops in Taipei, the environment is peaceful and serene, the books are arranged in a manner that seem more inviting than confusing. If I ever get to live in Taipei, I wouldn't be surprised if I would end up spending a few sleepless nights in the bookshop, enjoying a good book, drinking coffee.


Looking at the Old Master Q bus again, and beyond. At the Taipei 101 Mall, which was the world's tallest building for a short while. Bursting with colours in spite of the light rain, I found myself feeling very fond of the city. My first visit was in 2007 (when Taipei 101 was indeed the tallest building in the world then).

I went again in November 2011 for the Golden Horse.

And then, January 2012 for some interesting work.

Almost two years later, I was there again. Throughout each of my visits, my appreciation for Taipei would grow, especially when I gradually realize how similar it is to Japan, culturally, spiritually.

The Old Master Q bus rang in the distance, moving back and forth in a rather short journey in front of the "tobacco factory". Nevertheless, it was labeled as a "time traveling bus", offering to bring passengers to the past, from Taipei to Hong Kong, from 1964 to 2014. I too, find myself remembering the smell of a barber shop when I was reading these comics during my childhood.