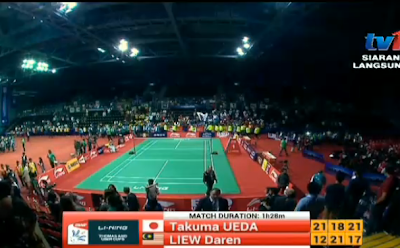 So, the Thomas Cup Finals had just ended. Malaysia made the finals after a 12-year-drought, but lost, which continues a 22-year-drought. No big deal, when more than two thirds of my life had been filled with disappointment, the pain just becomes a sort of numbness. Am I right? Right?


However, I was kinda excited when Japan managed to beat the 5-time defending champions China in the semi-finals. Can you believe it? China's been dominating the sports for a decade!

After that, I was joyous when Malaysia had finally beaten archrivals Indonesia too in the other semis. I don't think I've ever witnessed this before since 1992 (when we last won the Thomas Cup)

And I clearly remember the last time we got into the finals in 2002, yup, lost to Indonesia. So even though we lost, I think we exorcised our demons. It was sort of like when Phoenix Suns swept the Spurs in 2010, after years and years of losing to them.

I added this too, in my comment, because I was cautiously optimistic.

I will root for Japan. When most of my life is being disappointed by our badminton, I rather reject them before I get rejected. Being a Malaysian badminton fan is like a Form 5 fat nerd being in love with a girl whom everyone yearns after, when the girl gives you hope by chatting with you, most likely she will crush your heart by throwing herself after some bland boring jock dude who happens to be good-looking or rich. That girl is the Malaysian badminton team.


Besides, Japan being my second home (I basically root for Japan during the Olympics and World Cup), it's difficult to root against them.

It's true, most Japanese folks are indifferent/ ignorant to the beautiful sports of badminton. So much that Japan might have been the only country in the world to not be able to watch the Thomas Cup finals streaming on Youtube. EVEN THOUGH they are the finalists!


I ended up relying on good old RTM, because the Malay commentators are more intense and dramatic compared to the English ones anyway.

I started from the end of the 2nd match, when our first doubles team lost. Sat and watch until Malaysia and Japan were tied 2-2 and it had to be decided by the final third singles match between Daren Liew and Takuma Ueda.

A Malaysian badminton fan is almost like a pre-Andy Murray British tennis fan. You are so used to failure that in truth, you should learn not to expect anything. But when hope is there, you cannot help but cheer the players on.

That was me, cheering for Daren Liew.


Post by Edmund Yeo.
Not too long after that, he lost.

My reaction then was a resigned "why, of course."

But I felt the need to celebrate the new winners, because unlike Malaysia, not that many people in their country would be cheering for them, and thinking of that made me a little sad.

So I wrote this:

So... our 22-year-drought continues. Japan and Ueda's good-looking face have won the Thomas Cup for the very first time.

To illustrate how much Japan cares about the match, I think my dorm makes a great example. For the last few hours, more than a dozen dormmates had been having a drinking party... most of them Japanese guys, none of them talking about the Thomas Cup.

I walked past the common room a few times. Large TV. Guys were watching soccer, tennis, and then playing the Wii.

After they won, I heard a few smattering of claps and cheering far away, not too sure whether it was for Thomas Cup victory, or something else. I hope it was for their Japanese badminton team. They have won the biggest tournament for a sports that most are indifferent about.

And they did that by crushing the 5-time defending champions, China in the semi-finals, and narrowly beating a country with badminton as its national obsession during the finals. I applaud you, Japan.

A new badminton superpower in town. And we were too blind to notice it.

Supporting the Malaysian badminton team is calling a girl you really like but she doesn't answer. Later in the day, you receive a missed call from her. But only because she thought you were beneath her and she didn't want to pay the phone bills, so all she did was to let your phone ring once, knowing that you will call her immediately after that anyway.

The jolting feeling of excitement and hope is what you get when you think the team is winning, but after that, the numb empty feeling when you know she doesn't care about you at all is what lies in your heart when the team loses again. Continuing a 22-year narrative.