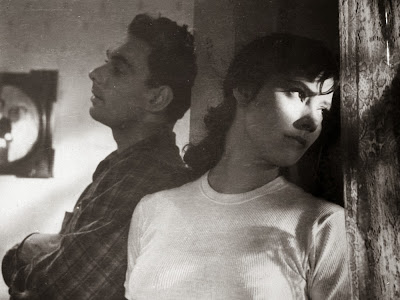 Last week, when the Cannes Film Festival was about to begin, many film sites that I've been following started publishing their lists of best Palme d'Or winners. I figured it would be a good time to catch up with some of them, especially the older ones.

Post by Edmund Yeo.
I noticed that one film that seemed to be a mainstay in all these lists was Mikhail Kalatozov's THE CRANES ARE FLYING (1957). THE CRANES ARE FLYING is, to date, the one and only Russian (then Soviet) film to have ever won the Palme d'or. Yes, not even the films of Andrei Tarkovsky (he won second prize twice with STALKER and THE SACRIFICE)!

The film is about the World War 2. Focusing on the life of a young woman named Veronika after her boyfriend Boris has volunteered to fight for his country. Veronika was played by the very luminous Tatyana Samojlova, who just passed away more than a week ago. Her presence in the film is absolutely enchanting.

The cinematography of the film by Sergey Urusevsky is absolutely stunning, I could name out the many scenes and images that remained stuck in my mind. Even though I was watching the film by myself, I couldn't stop myself from saying "wow" as some scenes were unfolding.

They had quite a few great long tracking shots.

Like this much celebrated scene where Veronika is rushing to meet Boris before he heads off for war.


And this scene when Veronika is running away from the hospital, on the verge of a mental breakdown. There's rapid-cutting, the camera's sped up, there are some unconventional angles (one shot seems to be an ancestor of the Snorri-cam) and it all comes together beautifully.


It's unbelievable that the film was made 57 years ago.

By the way, the entire THE CRANES ARE FLYING is actually available (legally) on Youtube.

After watching THE CRANES ARE FLYING, I suddenly remembered that the partnership between Mikhail Kalatozov and Sergey Urusevsky would later lead to the amazing SOY CUBA (I AM CUBA) in 1964. In this film they decided to take the visual experimentation they did with THE CRANES ARE FLYING to another level. The film had even more spectacular (long tracking) shots like these:

The first five minutes of the film was a total jaw-dropper in terms of visuals. I remember watching this with Kong the Cinematographer a few years ago trying to figure out how some of these shots were achieved.


The entire film was a visual feast!

They actually had another collaboration, LETTER NEVER SENT (1959), made between THE CRANES ARE FLYING and SOY CUBA which also starred Tatyana Samojlova. The entire film's also available on Youtube. I haven't seen this, but jogging through the film, it looks great too.