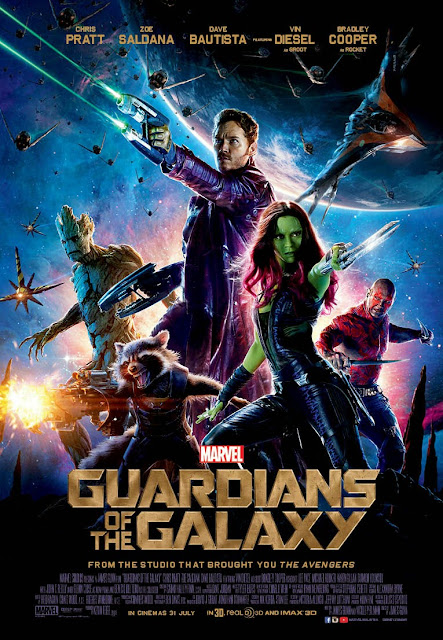 (Wrote my thoughts on GUARDIANS OF THE GALAXY on Facebook just now, I'll post it here too, with slight revisions)

I went to the GUARDIANS OF THE GALAXY press screening this morning. Looks really gorgeous on IMAX 3D. It's a really fun film, has a bit of everything, action, comedy, heart and a great soundtrack. (the original film soundtrack comes with two discs, one for the film score, the other are songs from the "Awesome Mix Vol.1" mixtape that the protagonist listens to on his old Walkman in the whole film)

I wasn't really expecting much. I was just hoping that it would be better than, say, THOR 2 or IRON MAN 2 (to date, my least favourite Marvel films in the last few years, along with INCREDIBLE HULK), but it turned out to be really entertaining and visually gorgeous. I'm a sucker for these type of "misfits in space" stories, it's an echo of TV shows and films like SERENITY (FIREFLY), COWBOY BEBOP, the first JJ Abrams STAR TREK film, and... er, the Ethan Hawke/ River Phoenix-starring masterpiece EXPLORERS. (Kidding about the last film.) Also elements of INDIANA JONES and STAR WARS.

Having not read the comics before (and entirely ignorant of its lore), I was rather fascinated by the worlds depicted in the film, an entire city built within a giant severed alien head? Whoa. Almost wished they could spend a longer time at each of the planets they were visiting.

Film's fast-paced, the ensemble's strong. Bradley Cooper's voice performance as Rocket the Raccoon is up there with his Oscar-nominated performances in Silver Lining Playbook and American Hustle, haha. And Dave "BATISTA!!!" Bautista gave the best performance by a wrestler (and I saw Hercules just a few days ago, The Rock was misused) as Drax The Destroyer.

Anyway, I enjoyed many things about the film, despite some flaws. I was probably more interested in the interaction of the (very endearing) characters, the exploration part, than the "save the world" action parts. The latter are stunning (large-scaled aerial battle scenes?), but I'm suffering from summer movie fatigue (seen too many films in the last few weeks where stuff get blown up) The emotional stuff are quite in-your-face, but they got to me.

Shut up and take my money, Guardians of the Galaxy 2.

So, yeah, this is among the summer movies that I enjoyed the most, along with DAWN OF THE PLANET OF THE APES, EDGE OF TOMORROW, X-MEN and... ah, 22 JUMP STREET. (2014 is a good year for sci-fi films)

P.S. I wonder how many variations of "I AM GROOT" did Vin Diesel do during voice recording sessions.

Answer: More than I imagined.