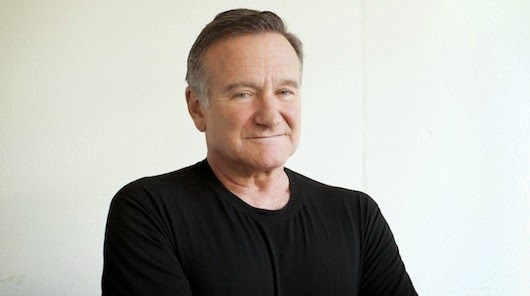 I woke up this morning at 8am and realized that my mother has forwarded the news of Robin Williams' death to my phone.

Suffering from severe depression, he had taken his own life.

As I headed off for a breakfast meeting, the shadow of this saddening news loomed over me like a grey cloud. And I couldn't help but try to remember...

Remembering the movies that I loved during my childhood to my teens, Robin Williams' presence had been palpable.

Perhaps the earliest film I saw him in was POPEYE, but at that time, I didn't know he was Robin Williams, I watched Popeye only because it was... Popeye.

But as I grew a little older, I began to remember him more in films, the voice of the Genie in ALADDIN, the grown-up Peter Pan in HOOK (which I loved back then), MRS. DOUBTFIRE (which I absolutely absolutely adored) and JUMANJI. These four films were films I had watched numerous times, on video tapes or laser discs, over and over again. Films that made me laugh and warmed my heart.

Reaching my teens, I became more captivated by a serious Robin Williams. GOOD WILL HUNTING, WHAT DREAMS MAY COME, they made me realize that he was an absolutely awe-inspiring actor. Not just a funnyman, much more than that. He won his much-deserved Oscar for GOOD WILL HUNTING, which I had watched only once, but with scenes that I remember until today.

"You don't know about real loss, because that only occurs when you love something more than you love yourself."

At that time, I also revisited his earlier films like THE FISHER KING (possibly still my favourite Terry Gilliam film) and AWAKENINGS.

The darker side of Robin Williams was enthralling, especially in INSOMNIA (Robin Williams as a villain? Boggled my mind) and ONE HOUR PHOTO (never seen him creepier). So much that I almost hoped that he would take more roles like that. I thought he would have been awesome in a film noir, as a hard-boiled detective, the lines on his face, the sorrowful eyes, the tired smile. It would have worked.

I didn't care too much for the films he did in the past decade (though I kinda enjoyed the NIGHT AT THE MUSEUM films), I still found him a very welcoming presence in awards shows.

Last year when I knew that he was in a new TV sitcom called THE CRAZY ONES, I immediately checked it out. Sadly, I could only sustain my interest for 3 episodes (but then, I generally cannot really keep up with sitcoms) Yet I still assumed that he would be here forever, trying different roles, alternating between funny and serious films. I was willing to wait for a next virtuoso performance that he had always been capable of.

What made him unique was that as manic and funny as he was, there was always some sort of sadness in his performances that he could so easily switch too. It felt absolutely heartbreaking that this sadness had been genuine.

I have spent the day revisiting numerous videos of his that weren't related to his films.

Look at him command the stage on WHOSE LINE IS IT ANYWAY.

Or an interesting experience he had during the middle of a performance at Camp Arifjan, Kuwait.