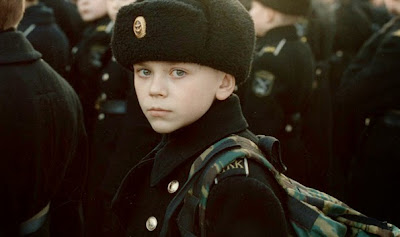 Pirjo Honkasalo's THE 3 ROOMS OF MELANCHOLIA (2004) is one of the few films I caught in CPH:DOX at Copenhagen last week.


I walked into the cinema with high expectations, since the CPH:LAB booklet I was given had recommended us lab people to go to the film, calling it one of the greatest documentaries ever made.

Despite the expectations, I was indeed mesmerized by what I saw, with numerous images haunting me long after I left the theaters. The film reminded me that non-fiction cinema can indeed be made with sheer artistry and poetry. I was reminded of Tarkovskian films of yore, even assuming that it was a film made in that time period. I was surprised that it was done merely a decade ago. Perhaps it was shocking to me, to see such things happening so recently.

THE 3 ROOMS OF MELANCHOLIA is about the Chechen-Russian conflict, and how this war has psychologically affected the children of Chechen and Russia. Divided into 3 parts, or "rooms".

The first room is set in a military academy in Kronstadt (near St. Petersburg), portraying the highly regimented lives of the young cadets, who are being trained for future roles in the Russian army.


There are lessons of military greeting. Which elicited some laughter from the audiences during the screening.


And more of their daily life in the military school.


A boy from the military academy visits his Grandma.


The heartbreaking second "room" can be viewed almost in its entirety on Youtube. This one shows the devastated capital of Chechen, A humanitarian worker is forced to separate a few children from their dying mother.

The haunting third "room" follows an orphanage where more children are profiled. An 11-year-old boy was found in a cardboard box and was brought to the orphanage, he was gang-raped by Russian soldiers. Another boy was brought in after he survived a fall from a ninth-floor apartment; his mother threw him off the balcony after her husband's death in the First Chechen War. A 19-year-old girl who was raped by Russian soldiers when she was 12.

They are called "The children of hate', roaming the streets, playing war games. Waiting for the day when they are old enough to take an active part in the conflict that the generations before them have paved the way for. Hate is indeed inherited.

By then, the melancholy that was in the film title has emerged forefront, seeping into every single scene, every single shot. The absolutely magnificent and mournful score, the gazes of the children, the majestic landscape.

Meanwhile, the sounds of warfare and destruction could still be heard afar.

While sharing this post on Facebook, I found out that a new friend of mine, producer Tahir Aliyev (whom I met in Copenhagen), was involved in this film as production manager, in fact, it was actually his very first film in 2003, which prompted him to move to Finland. I salute you, sir!