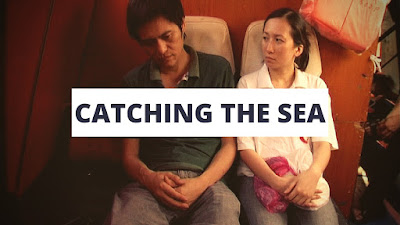 Once again I've been restoring and uploading some of the old short films that Ming Jin and I had made over the past decade onto the Greenlight Pictures Youtube channel.

My latest upload is Ming Jin's 2005 short film CATCHING THE SEA, which stars Pete Teo and Liew Seng Tat and served as a precursor (or spin-off) for his feature film THE ELEPHANT AND THE SEA.


Shot at the very scenic Pulau Ketam, this film has two parallel stories which follow a few wandering souls as they deal with loss after a deadly plague has swept upon their entire village.

I'm not involved in this at all (my collaboration with Ming Jin only started in 2007), but for the sake of Youtube upload, I've been replacing some of the old music with original tracks so that we wouldn't get into copyright issues. So it's great to bring back regular collaborator Wong Woan Foong's contemplative piano piece to end this short. Aside from that, I've also been doing the Chinese subtitles for these films.

CATCHING THE SEA pretty much characterized many of the Malaysian New Wave cinema that emerged in our country during the mid-2000s. Mini-DV cinematography, pensive atmosphere, minimalistic plot, and languid rhythm meant for contemplation.

You can watch Ming Jin and my other shorts and telemovies here: