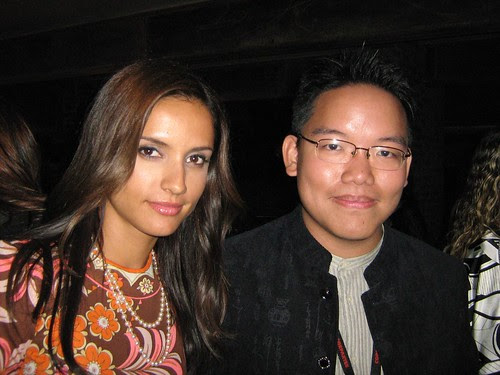 I am currently a film producer in the production company, GREENLIGHT PICTURES. I was invited to the Santiago International Film Festival (SANFIC) nearly two months ago, as the producer of the local film 'THE ELEPHANT AND THE SEA' directed by Woo Ming Jin. THE ELEPHANT AND THE SEA is going to compete under the International Competition against eight other films from different countries.


It took me 8 hours to reach Sydney by flight, another 3 hours to Auckland, New Zealand, and finally, from Auckland, 10 hours to Santiago, Chile. I was in a plane for nearly 21 hours, thankfully, more than half of the amount of time was spent on sleeping. Another half was spent on watching movies, from KL to Sydney, I managed to watch WAITRESS by the late Adrienne Shelley, followed by half of BUBBLE before I fell asleep. Then from Auckland to Chile, I watched an Argentinean family drama called FAMILY LAW, well-acted, but nothing special, I tried to follow that with Ice Cube's ARE WE HERE YET? It was awful, and I fell asleep not long after that.

I spent an hour and half each in the Sydney airport and the Auckland airport, in which I managed to buy myself the last two issues of WIRED magazine at their bookshops, and had meals that were absolutely more filling than plane meals (EAGLE BOY PIZZAs in Sydney, BURGER KING in Auckland), although to be fair, the meals on the Lan Chile planes ain't bad.

When I reached Santiago Airport, I, along with an Argentinean film director and director of photography, was picked up by the people of the festival in a van. When we made our way to the GRAND HYATT HOTEL, I was struck by the majestic sight of the omnipresent Andes, its mountain range was looming everywhere over the city, no doubt the highest and longest mountain range in South America. Spanish was the main language spoken in Chile, being able to speak only a few words of Spanish, I was worried that I would get into a 'LOST IN TRANSLATION' scenario, but without being able to meet Scarlett Johannson.

As I checked in, I requested for a room at a higher floor, and I was given room number 14 at floor number 14. An unfortunate number for the Chinese ('4' sounds like 'death' in Chinese, while '14' means 'absolute death', so my room was 'absolute death absolute death'), but I didn't really care that much.

I was given a pretty big room. And the view through the window was wonderful. It was two in the afternoon, there would be an opening ceremony and party at seven thirty, so I channel-surfed, watched through a couple of films at the movie channels. 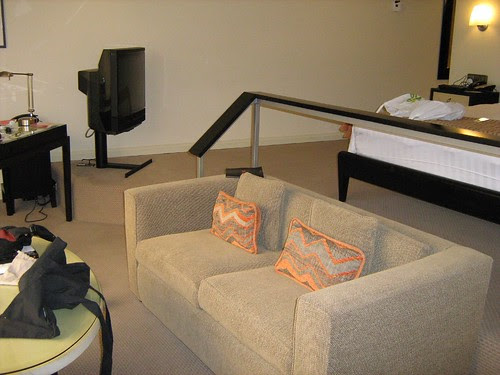 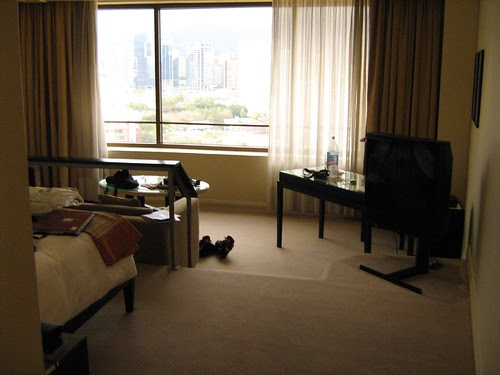 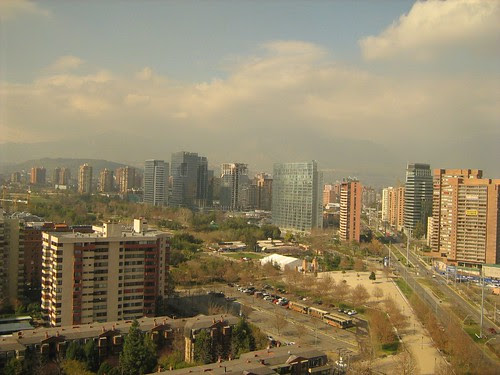 When being escorted to the venue of the SANFIC film festival in the van, I managed to meet a director from New York, along with his wife, his sister, his in-laws and his own parents. Formerly an actor and a playwright, he adapted his play into a film, and his debut film were to be shown at the festival too. They were all nice people, and we got along immediately, because, well, our inability to speak Spanish formed some sort of bond between us. Haha.

I also got to know a filmmaker from Canadian filmmaker and his producer. Funny guys. I chatted with them both, and with the producer (my counterpart! But nearly three times my age!) taking the obligatory shots at Hollywood, consumerism, and the agonies of conformity and compromise. You know, the usual stuff suffered by angry starving artists.

(Canadian producer: "The System is against us! It is time for us to work around the system!"

Canadian producer: "With all those rubbish that are being released these days, when will quality works will ever be supported financially?!"

Me: "Exactly! We are, like, so totally screwed by the System, man!")

The film festival was held at an awesome and huge multiplex (called SHOWCASE CINEMAS) in this massive shopping mall near the hotel (it's within walking distance). After the opening ceremony, the party was held at a club nearby.

Canadian producer had plans of tapping into the Latin American market by making a film with a Chilean actress that includes... artistic nudity. So he was definitely keeping an eye out for pretty Chilean women in the club.

(Him: "Mind you, we are NOT making pornography!"

They approached an enthusiastic Chilean girl wearing a cap. She was pretty, but she told the filmmaker and the producer that she was an art director, not an actress. Nonetheless, they were eager to work with her.

And then, there was a very beautiful young Chilean woman chatting with another guy nearby. The Canadian director pointed at her:

"She's a famous actress in Chile."

I looked at her for a while.

"I'm not kidding, you should approach her and talk to her! Take a photo or something!" The Canadian director said.

Smiling in amusement, I walked towards the woman, our eyes met briefly, we exchanged smiles, then I walked past her. Whether she was really a famous Chilean actress remained a mystery, but I saw another Chilean actress (and member of the jury), Leonor Varela sitting nearby with a couple of her friends, I asked politely whether I could take a photo with her, and she said yes. (the photo is at the top of the blog post) After that, I wanted to tell her that I liked her acting in ARRESTED DEVELOPMENT and BLADE 2, but the club was too noisy, so I merely thanked her, and walked away.

I walked past the table of the Canadian filmmaker and his producer, and saw them engaged in a serious discussion with the 'famous Chilean actress' they asked me to speak to initially. They were happy, it seemed that they might have found their... lead actress. How lucky.

A pretty brunette greeted me in Spanish, she was near my age. I said 'hi' in return, and asked whether she spoke English. She said no, but asked in halting English for my name, and why was I in the party. I answered, showing her my tag, which reads "COMPETENCIA INTERNACIONAL, EDMUND YEO, PRODUCTOR "THE ELEPHANT AND THE SEA") 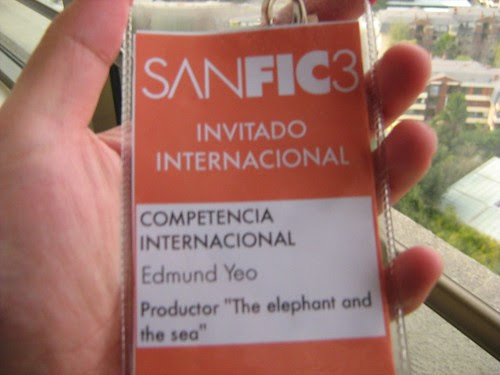 "Are you an actress?" I asked, with irony.

She said something in Spanish, her excitement remained consistent.

"I see!" I replied enthusiastically, not understanding a single word she was saying. I handed her my name card, I doubted she was really an actress, but I had been generously giving out my cards... in an attempt to promote Malaysian independent cinema.

Looking at the card, she called excitedly for a bearded guy standing nearby, we exchanged greetings, he spoke very little English as well, but he was friendly and nice, and started writing his phone number on a napkin, telling me that if I ever visit Santiago again, he'll show me around. He's a friend of the Festival Director.

"Oooh." I remarked, and immediately took the opportunity to 'remind' them that my film was to be shown the following day (and Friday), and that I'll be at the Q & A session.

Ever a relentless promoter.

The cigarette smoke that filled the air was getting suffocating, I excused myself, giving the couple and their friend high-fives, and pushing my way out of the sea of humanity that flooded the club.

A Coca-Cola booth was set up in the middle of the club, a girl stood there, offering Diet Coke in paper cups. I took a cup from her.

A dazzling smile spread across the Coke girl's face like a butterfly, illuminating the dark place with a brilliant light. Time stopped, everything around me became a blur, and all I could see was her.

"Are you an actress?" I wanted to ask. Again. The oldest trick from a filmmaker's book.

But I was so blinded by the light of her smile that I exited the club.

A strange sense of loneliness seeped into my soul.