Chile (Part 2): THE ELEPHANT AND THE SEA screening got canceled!

Go read Swifty in Chile (Part 1) if you haven't.

'The Elephant and the Sea', the film I represent as producer, was to be screened at 8:30pm, during my second day in Santiago, Chile. The strange sense of loneliness described at the end of the previous entry was decimated by absolutely delicious breakfast.

I needed to go online before that. And the only way to do so was to bring my laptop to the SANFIC Guest Office.


Over the weeks leading up to my departure to Chile, I corresponded with only one person from the festival. The person was in charge of providing details of my flight schedule, hotel bookings and such. Judging from the name of this person, and the writing style, I envisioned a middle-aged or elderly gentleman. Fat, slightly balding, authoritative but polite.

I finally got to meet this person when I entered the office. The person was sitting behind a desk, typing on a laptop. Seeing me, the person stood up and asked in English, flavoured with a heavy Latin American accent. A deep and clear voice.

"Are you Edmund Yeo?"

She was a young lady. As the familiar name came forth from her lips, I knew who she was as we shook hands.

Delicate elfin features framed by brown luscious curls that cascaded down her shoulders like waterfall. The fairness of her skin accentuated by the black business-like attire she wore. Dark eyes peering at me through black-rimmed glasses.

"How odd! I had envisioned you as a middle-aged or elderly gentleman." I remarked, barely concealing my surprise, and leaving out the 'fat, slightly balding, authoritative but polite..' part to avoid further offense.

"Haha! But my name is obviously a girl's name." She replied.

"Ooh." was my witty retort, betraying my ignorance towards Spanish names.

Then I set up my laptop at the Guest Office, got my internet connection, and checked my mail, and then my Facebook account, and then this blog. I had originally intended to update the blog, until I realized that I didn't have the photos to do so. What meaning would there be if there were no photos to illustrate what I had to say?

At the same time, numerous questions floated in my mind as I surfed the net mindlessly. I looked up from my laptop finally and asked whether I could extend my stay in Chile as it wasn't my intention to leave before the awards ceremony. I also asked whether I could tour around Santiago city more, to see its most famous locations before I leave.

"It will all be arranged." She said with smooth professionalism. Immediately, she scribbled a few notes on a piece of paper. She started making phone calls, and at the same time, busily issuing instructions to those around her.

I returned to my room and took a nap, I had learnt a few lines of Spanish from the festival volunteers for my introduction of 'The Elephant and The Sea' and I needed the rest.

I was then driven to the multiplexes, said to be the grandest in Santiago. Night had already descended upon the city, the last remnants of sunlight banished by a mild rain that shrouded my surroundings in mist.

When I reached the place (it was indeed a grand-looking multiplex), a line had formed outside theater. Quite a number of people were going to see 'The Elephant and the Sea'.

"Are you nervous?" A woman asked me, the wife of a film distributor who traveled to the multiplex with me.

The film's screening time was approaching, but everyone remained waiting. The film distributor asked the volunteers and the theater employees what was going on.

There were some problems with the beta tape sent to the festival.

The cold touch of concern and fear gripped me as I voiced a silent, disbelieving "what the f...?"

We waited for a while, festival volunteers were running here and there. I finally received the awful news.

The beta tape couldn't be played at all.

The screening was canceled.

This announcement was made to audiences when they enter the cinemas. Another film replaced 'The Elephant and the Sea'.

In my imagination, the audiences were outraged that this happened, and threatened to burn things down like what happened to SIVAJI THE BOSS.

But in reality, all I heard were words of comfort and reassurance uttered by those around me from the volunteers, the jury member, and festival VIP etc. I acknowledged each of them with a cheerful and grateful smile. It was the only thing I could do to cover my disappointment.

There was another screening scheduled in two days, while the cancelled screening would be replaced by another during the weekends, I was told.

I was escorted back to the hotel again, a lonely figure sitting alone in a van, I had to give the print managers DVDs of the film just so they could make another copy for theatrical screening.

After leaving them the DVD, I walked to the McDonald's near the hotel for a lonely dinner, the light drizzle remained, symbolizing my unwept tears. Their burger, Big Tasty, true to its name, was pretty tasty, but my enjoyment of the meal was diminished by the fact that I was half-eating and half-making a long-distance call to director Woo Ming Jin telling him what had just occurred. (the conversation was filled with lots of 'oh nooo...', 'oh, maaaaan', 'how could this be...?', and 'urgh'.)

I took a walk to another multiplex where the festival was also held.

Since I couldn't screen my own film, I needed to watch another film to drown my sorrows. I managed to run into the artistic director and the executive director of the festival. The unfortunate tale of my screening's cancellation had spread to almost everyone.

"Are you all right?" Asked the lady whom I introduced in the 3rd paragraph of this blog entry.

"Oh, I am. All I did was bawl my eyes out when I returned to my hotel room. I couldn't stop weeping." I deadpanned.

The film I saw that night was a German documentary film called POOL OF PRINCESSES, by Bettina Blumner.

I figured that a film with 'pool' in its title would drown my sorrows, it kinda did. 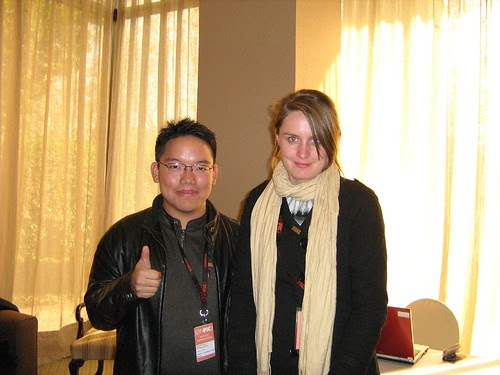