Sweet Success - Interview with The Star

Just found out that I was on The Star today when Kien Keong told me about it via Facebook chat. Last week Sandra Low conducted an email interview with me, being one of the winners of last year's BMW Shorties with Chicken Rice Mystery. It's a great article worth a read because not just me, but Grand Prize winner Nazim, Audience Award winner Moe and co-Honourable Mention winner Maha were interviewed as well. Click the link below:

My excerpt is here:

Yeo, a producer/director/writer with Greenlight Pictures, a local production company, was on a roll after that – he directed four new short films and produced a full-length film.

One of his short films, Love Suicides, has been selected for official competition at the up-coming Paris Cinema Film Festival.

In an e-mail interview from Tokyo where he is doing his masters in film at Waseda University on a scholarship, Yeo says:

“The H2O theme was quite challenging and I found it difficult to place that in the narrative. I decided to work it into the aesthetics of the film, using water to generate atmosphere and for symbolism. For example, the climatic scene in which the boy has to make an important decision is set at the pasar malam on a rainy night, and the mother’s feelings of turmoil are illustrated by the shots of water droplets around her.”

Yeo, shot his film over two days, mostly in his own house and places nearby.“I was already happy to be shortlisted and never thought of winning. It felt like being a kid again. It was like I had a nice little toy that I loved, and knowing that other people also thought the toy was cool gave me a quiet sense of joy,” he says.

“I really hope that more people will start paying attention to short films as a medium. It’s probably quite alien to some, but just like how you can find gems in novels and short stories, some local short films are definitely worth a look. Especially now that they are now making some waves at international film festivals.” 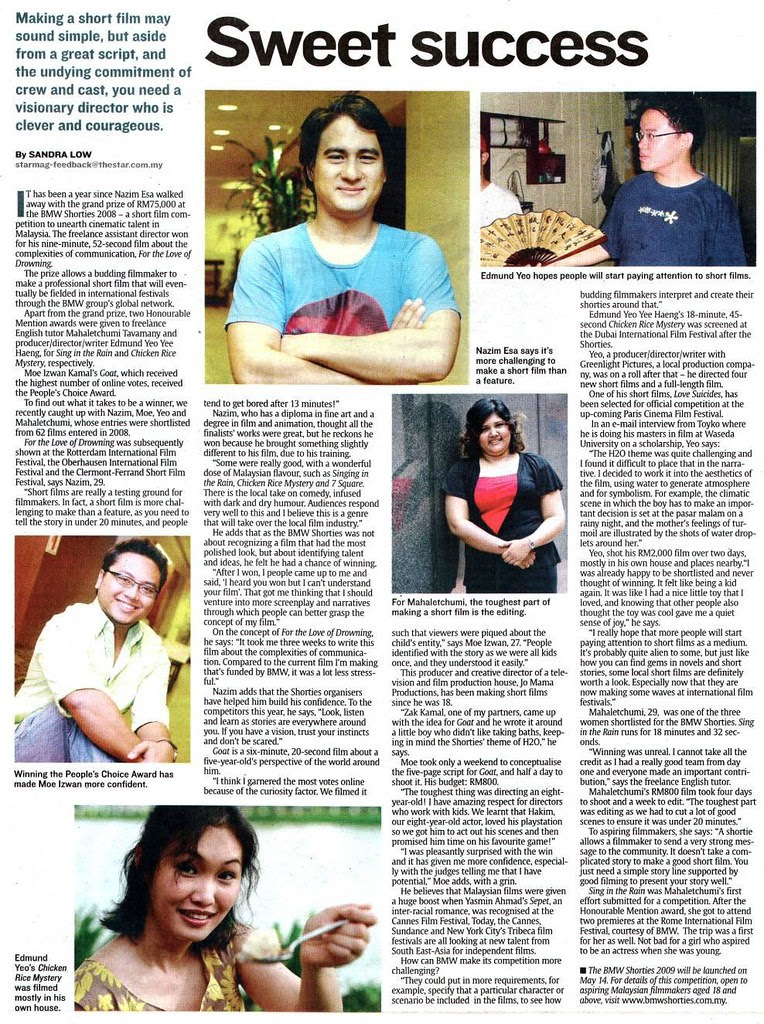 To be on the papers on Mother's Day was kinda cool, so I called my mom to tell her about it. Apparently mom is still in Shaolin Temple, and will be flying to Shanghai this afternoon to meet up with dad.

Mom's happy with the news, and told me she's on today's Guang Ming Daily as well. So on 2009's Mother's Day, both my mom and I appeared on the papers, that's quite unique.
Email Post
Labels: Chicken Rice Mystery Love Suicides Media Mention