"CHASING THE DREAM" - article of me at Goreng Dot Com

"CHASING THE DREAM", Erna's profile of me on the brand new Goreng Dot Com website came out two days ago. 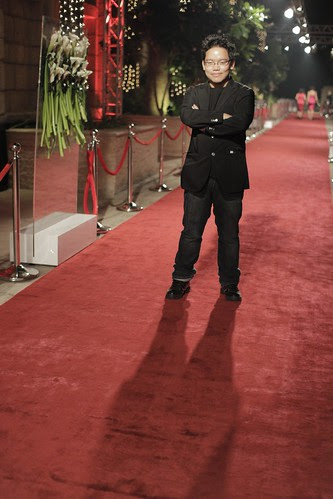 (No, this photo was NOT used in the actual article, but I like how I look in it, so I post it here, please forgive a man for being slightly narcissistic)

His beginnings, though meteoric, were humble. Yeo started out making films with a small camcorder bought by his mother while he was studying at Murdoch University, Perth. Armed with that and some video editing software installed by a friend, Yeo began experimenting.

He taught himself to edit his own videos and soon started asking his friends to act in films he shot on his camcorder. Realising there was still a lot he needed to learn, Yeo decided to enroll in a one-year course in film-making.

Despite that, Yeo fervently believes film-making is "not something to be studied."

“The act of film-making itself has to be experienced, “ said Yeo.

He recalls seeing students studying media production yet without any passion in films or film-making.


I was so bitter then, so angry that they were living my childhood dream. I was slogging through my marketing degree where I languished in mediocrity as certain fellow Malaysians in Murdoch Uni got hold of exam papers from previous years through nefarious means during their exam preparations.

Questions were often repeated in exams, so by getting the papers, they had a good idea what was coming out, and unsurprisingly, scored well in their exams. I, who once believed in the old-fashioned 'study hard to attain good grades' adage, was absolutely devastated. I'm soooo sure that scoring these good grades for their marketing papers then have helped them a lot in life now.

As for the aforementioned media production students, that's a story for another time.

Another excerpt that shows my ridiculously idealistic nature:

What galls him though is what he sees as the line being drawn between "art" films and "commercial" films.

“While the art films travel solely overseas to international film festivals with little hope for domestic release, domestic commercial films remain only within the country.”

He surmises that if domestic commercial films were created primarily for profit, why not explore the potential of the overseas market to maximise that profit?

Yeo gave examples of countries such as China, Thailand, Japan and Hong Kong where both art films and commercial films enjoyed their own form of success overseas.

“I think for the film industry of a country to work well, both art and commercial (films) should complement each other.”