VCinema interviews Kiki Sugino. She thinks I should be an actor. (for my looks, I guess)

VCinema had just posted up Marc Saint-Cyr's interview with Kiki Sugino (actress and producer of my short film Exhalation) regarding both our collaboration and also HOSPITALITE by Koji Fukada, which she also produced and acted. 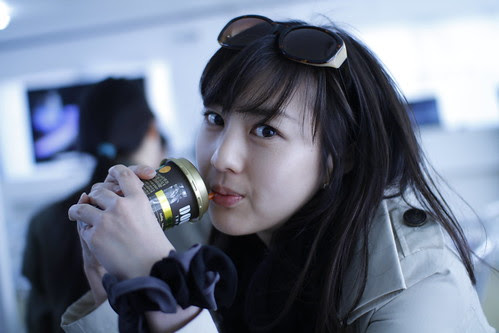 I loved the part where she called me a genius. Even though it was solely in my imagination and not really in the interview.

Anyway, here are some notable quotes of hers regarding our first meeting with her, and how EXHALATION came into being:

"I met Edmund through Woo Ming Jin at the Pusan International Film Festival in 2009; I met Woo Ming Jin in 2008 at the Tokyo International Film Festival. Edmund’s a really funny guy – I really love his character, and I really, truly believe that he wouldn’t be out of place as an actor. We met in October in 2009, and by December we had already created a short film. We chatted, exchanged e-mails and were asking each other what we wanted to do and what kind of story we wanted, and all of a sudden it just became a reality. Maybe the reason why we got so friendly is because our birthdays are five days apart – we were born in the same year. Plus, I’m a Korean living in Japan, and he’s a Chinese-Malaysian in Japan as well, so we had that search for identity in common with each other, and I felt that we had very close values. I think it would be great if we could make more films with an international perspective."


Regarding my directorial style:

"Edmund is the type where he’s basically worrying all the way up to when the shooting starts, then he makes a split-second decision right before everything happens. He has a very strong overall vision, but he does worry about specific things like visuals, the little details – those are the things he worries about. He loves Tarkovsky, and you can probably see that in his images."


Yes, I actually do have a very improvisational and hands-on approach to directing. That's the school of Malaysian independent filmmaking, haha.

Most of the time I would edit, add, or remove scenes on the spot, changing dialogues etc. For me filmmaking is quite an organic thing, but at the same time, collaborative too. When I realize that the actor's interpretation of my character is different from my initial imagination, and seems to actually have a chance to enhance what I originally had, I would immediately make quite adjustments that weren't in the script. Sometimes, when actors come out with a line during ad-libbing, that particular line might actually end up being a crucial, recurring line in my film.

(Aside from KINGYO, I never really did storyboards, mostly composing and setting up shots on the spot too.)

"Give me a Tarkovskian shot!" is a line from me most cinematographers of mine had to endure.