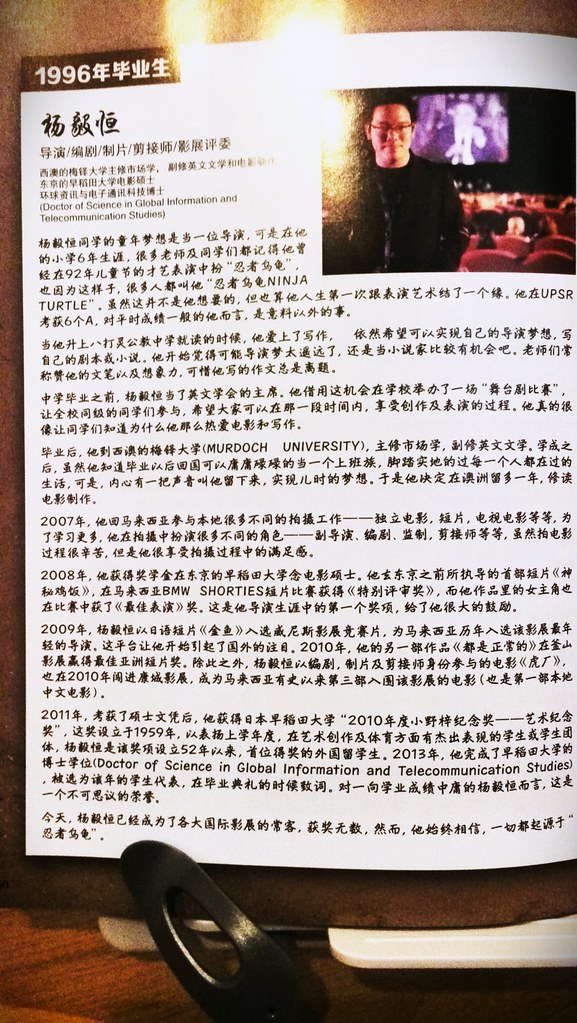 
Late last year, my primary school, Puay Chai 培才华小, celebrated its 90th anniversary. Surprisingly, I was contacted by the school because they want to list me as one of their notable alumni in their special magazine, I guess it had something to do with the filmmaking thingie that I spent the last few years doing. I was truly honoured and humbled by the gesture, I have had a lot of fondness for my school.

Here's a rough translation of what was written in the magazine:

Edmund Yeo's childhood dream was to become a film director. Unfortunately for him, during his six years in primary school, teachers and students remember him more for dressing up as a Ninja Turtle on a Children's Day talent competition. And so most called him "Ninja Turtle" instead. It wasn't what he wanted, but one could say that this was his first exposure to... performance arts. He scored straight As in his UPSR (the final exam in primary school), for someone whose academic grades had been merely average, it was a surprising achievement.

For secondary school, he went to Catholic High. At that time he fell in love with writing, and continued hoping to achieve his dreams of directing, writing his own scripts, or even a novel. By then he started to realize that maybe his directing dreams were too far away, and it seemed more plausible to become a novelist instead. Teachers had often praised him for his writing and imagination, unfortunately, his essays usually veered off-topic.

Slightly before graduating from high school, Edmund took over as president of the English Language Club, he used this opportunity to organize an "Inter-class Drama Competition" for everyone in school, hoping that the people can learn to enjoy the pleasures of creativity and performance. He was hoping that his fellow schoolmates could understand why he had loved cinema and writing.

After that he went to Murdoch University in Western Australia. Majoring in Marketing, minored in English Literature. Once he finished his studies, he knew he could go home and find a office job with stable financial income. But he decided to stay around and chase after his childhood dream, he chose to do a one-year course in film production.

2007, he returned to Malaysia and was involved in numerous different productions: independent films, short films, telemovies etc. In order to learn more, he played different roles in production: assistant director, screenwriter, editor, producer etc. Filmmaking was tough, but he enjoyed the excitement.

2008, he received a scholarship and went to Waseda University in Tokyo to do his Masters in filmmaking. A short film he directed before going to Japan, "CHICKEN RICE MYSTERY", received a Special Jury Award at Malaysia's premier short film competition, BMW Shorties, his lead actress won a "Best Acting Performance" too. This was his first ever award as a filmmaker, and it reinforced his confidence.

2009, his first Japanese short film "KINGYO" was invited to the Venice Film Festival, he became the youngest Malaysian director to ever compete in this prestigious festival. He slowly gained more attention from international film festivals.

In 2010, his other short film "INHALATION" received the Best Asian Short Film award at the Busan International Film Festival. During the same year, "THE TIGER FACTORY", a film he produced, co-wrote and edited, was selected for screening at the Cannes Film Festival. It was the 3rd ever Malaysian film screened at Cannes.

2011, he received an Azusa Ono Memorial For Art Award from Waseda University, at that time he was the first-ever foreign recipient in the award's 52 year history.

In 2013, he finished his doctorate and was selected to give a speech on behalf of other doctorate students at the graduation ceremony. For someone whose academic results had always been average, it was an unexpected honour.

Today, Edmund Yeo's films have shown in numerous film festivals around the world, winning several awards etc. But he still believed that it all started with "Ninja Turtle".

Thanks, Puay Chai, I'm happy that I can make you guys proud.

(On the other hand, my relationship with my high school, Catholic High PJ, is much more complicated)