(As I was finishing this post, I found out that this film had won the AGNES B. award at the Tokyo Filmex, congrats!)

After taking photos of Ueno Park yesterday, I rushed off to catch Sono Sion's LOVE EXPOSURE at Tokyo Filmex. Frankly, the main reason I wanted to catch the film was for the experience. It's not everyday that you see a 4-hour Japanese film around! There weren't anything else I knew about the film.

Having not seen any of Sono Sion's films prior to this, and having just read a Bela Tarr interview a day before, I had assumed that this would be a slow and languid arthouse flick that requires tons of endurance and patience. So I packed myself some Black Thunder (awesome chocolate biscuits that you can only get in Japan) and most importantly, a can of coffee. During the (Tokyo Filmex Grand Prize-winning!) WALTZ WITH BASHIR screening at the same film fest a few days earlier, I was dozing off at some parts (not because it was boring, but because I myself was tired), so I didn't want the same to happen again.

When Sono Sion and his cast came to introduce the film, he assured everyone that the film would be 'over in a flash'. I was reluctant to believe him. 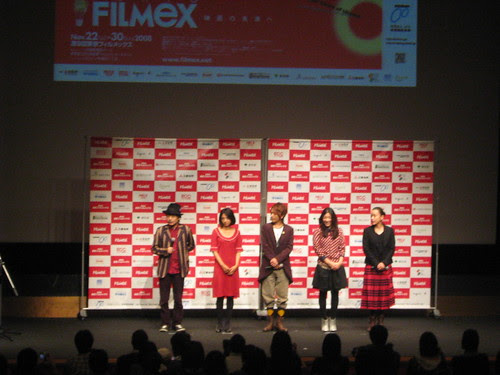 
Four hours later, I didn't even open my can of coffee at all.

Let me borrow the synopsis from Jason Gray's blog post (he was at the premiere too).

Protagonist Yu comes from a devoutly Christian family. A certain incident results in his priest father forcing him to confess his sins, which he commits daily out of a strong desire for praise. In the process Yu develops a taste for the sin of secretly taking photos of others and becomes the sneak photography king of high school students, but then he falls in love with a girl named Yoko who he meets by chance one day in town. Their relationship leads to unexpected developments involving a mysterious religious cult...With an extraordinary running time of almost four hours, Sono Sion's latest film is an unconventional masterwork that throws various aspects of contemporary Japan into its wild potpourri, depicted in the framework of an epic love story. His adeptness in presenting chaos as chaos while also realizing breathless entertainment is worthy of admiration. Nishijima Takahiro, lead vocalist of pop group AAA, gives a fine performance as Yu. Mitsushima Hikari and Ando Sakura are also wonderful as the two women in Yu's life.

(by the way, Mitsushima Hikari's personal blog here. In Japanese though)

I'll also add the press notes from distributor Phantom Film that are also on Jason's post.

A high school boy named Yu will go to the extreme, even risk his life to save his step-sister Yoko from a religious cult. A powerful new drama by the one and only auteur Sono Sion.

Yu is a high school boy who lives with his father who became a priest after Yu's mother died. But one day, a woman, Kaori, falls for Yu's father although she knows that he is a priest. Yu is completely against this because he does not like Kaori's eccentric presence intruding the father and son's peaceful life, and even more because she brought with her Yoko, the girl he fell in love with at first sight. He does not want the girl of his dreams to become a step-sister! One day, religious cult member Koike finds this so-called family as an interesting group and kidnaps three members of the family leaving Yu behind on purpose hoping he will join the cult soon. He will not fall for Koike's tricks, but instead will do anything to save the love of his life Yoko from this religious cult. An exciting, powerful drama based on some true events.

Despite its length, the film was surprisingly accessible, and in most of it, Sono Sion aimed to entertain his audiences with lots of humour and homage to martial arts films of the past that he liked. Film's a blend of comedy, action, romance, tearjerking melodrama, character study, family drama and social commentary, so it was firing from all cylinders, aiming to generate all kinds of emotions from audiences. There were lots of laughter during the first half of the film, and as film shifts to darker and more serious territory after its 10-minute intermission (my, I haven't had that since watching a Bollywood film at the theaters in New Delhi last year!) I heard some loud sobbing in front of me. I thought it was a woman, but when the lights came back after the film ended, I realized it was a big guy.

I didn't write about this film immediately last night because I wanted to familiarize myself with more of Sono Sion's works, so that I won't make some needless assumptions in this blog post. So for the entire day today, I was watching an earlier work of his called NORIKO'S DINNER TABLE (2005), starring Kazue Fukiishi (a personal favourite whose photos had graced this blog numerous times).


I realize that there are numerous similarities between the 2 and a half hour NORIKO'S DINNER TABLE and LOVE EXPOSURE, especially in terms of plot structure. Both films are divided into chapters, each focusing on the narrative perspective of a different character. Allowing us to dwell deeper into the psychology of the primary characters, knowing their backstories and the like. In LOVE EXPOSURE, the focus is on Yu, Yoko and Koike, and the first three chapters happen concurrently, to show us how each of them ended up at a particular point of the story. But once the title sequence appear (... I think maybe an hour and a half into the film), the plot becomes slightly more linear.

Actually, the introductions of the three main characters, told in slightly different styles, might be my favourite parts of the movie. Those moments were when I started figuring out the actual scope and ambition of the director, and was enjoying how Sono Sion had actually made the film work despite the mishmash of styles and genres (trust me, my description makes it sound more messy than it really is). It's some ballsy and tour-de-force filmmaking. While the rest of the film is still pretty good, and also miraculous in its ability to hold everyone's attention despite its running time (it's actually more fast-paced than the more introspective NORIKO'S DINNER TABLE despite being an hour and a half longer), I felt that LOVE EXPOSURE faltered at some places, and I was a little bothered by some plot holes as well.

I wondered briefly whether, in Sion's attempts to appeal to as many audience members as possible, he ended up making the humour a little too broad, to the point where it became a slight impediment to the story. It's not that I have anything against lowbrow humour, it's just that somehow the whole exaggerated effect of Yu's 'hard-on' feels very out-of-place in this film. It's like watching a Wong Kar Wai film, and all of a sudden he decides to throw in some Wong Jing-esque humour into the fray. Or a serious Sam Mendes drama that's suddenly interrupted by some Farrelly Brothers' style sight gags. As much as it induced giggles among audiences, I was a little bothered then.

Now, when I said that this film's accessible, I meant it more in terms of execution than actual content or themes. The film is still quite dark, aside from being a scathing commentary on modern Japanese society, anarchy, blind belief in religion and numerous other themes that he visited in his previous films (isolation, dehumanization, apathy, family dysfunction), there are elements of incest, lesbianism, cross-dressing... come on, the hero takes pantie shots for a living, for crap's sake. It's also ultraviolent, lots of fountains of blood, and one particularly cringe-inducing scene involves um, not so nice things happening to a guy's genitals.

Sono Sion makes his film with audiences in mind, but that doesn't mean that he compromises and shy away from disturbing content. He explained later in the Q and A session that he found it necessary to depict Yu's sneak photography misadventures in a comical manner (similar to a kung-fu film) in order to make the film more enjoyable or palatable for audiences. Of course, it's also to ensure that the protagonist remains likable. Unfortunately, when asked whether he had any trouble dealing with talent agencies of his actors because of the bold content, Sion didn't seem to answer directly (I was curious to know whether he needed to deal with anything like that or not, with lead actor Nishijima Takahiro being a lead vocalist of a pop group AAA). He merely praised his cast for being daring enough during the shoot. I agree, and I think that the performances, while over-the-top at times (more to do with the screenplay than the actors), are pretty good. Being such an epic tale, all actors get to display a wide range of emotions and the like. Production values are good, even the martial arts scenes are handled well.

Sono Sion is also a poet (read his Wikipedia entry), so he has a good eye for details. He does have something to say in this love story, yet I can see that he was able to pull it off without alienating too many people, so is already a marvelous feat. For an independent (?) film of such ambition and scope, I half-expected it to devolve into a lumbering mess before I entered the cinema, so I was more than surprised with the end results. Not a flawless masterpiece, but still an immensely unique experience, and a really good and entertaining film. I'm interested to see how it'll do at the festival circuit next year, and also when it's released commercially next January. It's difficult not to admire the film.


(UPDATE 3/12/2008): Four days after seeing the film, I would end up stumbling into a role as an extra in a film with lead actress Mitsushima Hikari, was introduced to her, and then had a brief conversation with her. Read about it here.
Email Post
Labels: Film Reviews Sono Sion Tokyo Filmex 2008