Showing posts with the label The Tiger Factory
Show all 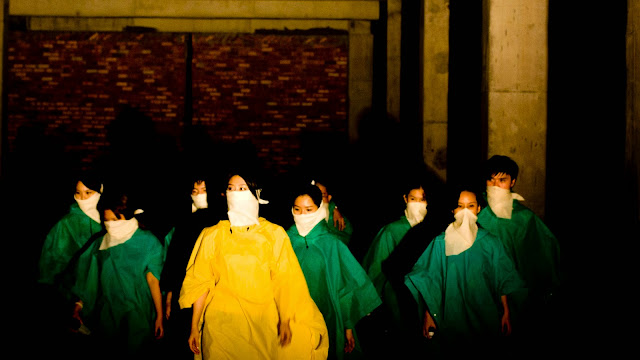 - March 07, 2014
So, I turned 30 yesterday. A while ago, I looked at it with slight trepidation, I don't think I was prepared to say goodbye to my twenties just like that.
READ MORE »

The Japanese director Kaneto Shindo passed away yesterday at the age of 100.
READ MORE »

4 of my short films online now thanks to Yxine Film Fest's Mini-Focus on me.

The YxineFF is an annual online short film festival that focuses mostly on Vietnamese short films, and also some South East Asian ones. I met its founder Marcus Manh Cuong Vu at last year's Hamburg International Film Festival, when he moderated the question and answer for THE TIGER FACTORY screening (Ming Jin the director couldn't go, so I went on his behalf as the immensely cute producer). He also later did a short interview with me about Malaysian Independent Cinema and other stuff. I'm very honoured that this year's Yxine Film Festival is doing a mini-focus on me. For a temporary amount of time, four of my previous short films are uploaded online for the viewing pleasure of audiences, all of them except INHALATION are actually loose adaptations of Yasunari Kawabata's works.
READ MORE »

THE TIGER FACTORY Q & A session

In exactly 12 hours I'll be flying off to Rotterdam. Aside from my own short film EXHALATION, I'm also there for Ming Jin's THE TIGER FACTORY, which is the feature film spin-off of my short, INHALATION (hah). Since he can't make it to the festival, it's all up to me to handle his Q and A sessions as well after each screening. Fun.
READ MORE »

I'm now in Dubai, took numerous photos and videos. But before I give you all updates of my misadventures there, I'll do a recap of Cinemanila International Film Fest first. Like I mentioned in a previous post, I went to Cinemanila right after the Torino Film Festival/ Film Lab . 3rd of December. I arrived in Manila during the afternoon, I was picked up at the airport. I intended the festival to be one where I could rest, since the Torino schedule was so hectic. "Well, for tonight, I'll just relax, and maybe catch the SCOTT PILGRIM VS THE WORLD screening." I told Raymond, who was picking me up. His day job is actually as a TV writer. "Oh, I'm afraid you can't do it. The awards ceremony is tonight." Raymond said. "What? But today's only the second day of the festival!" I was flabbergasted. "Yes, but they wanted to get the awards out of the way first." Raymond said. So... that evening, we went to the award cere
READ MORE »

The last day of the Tokyo International Film Festival 2010

31st of October. I headed to Roppongi to wait for the Green Carpet event prior to the closing ceremony. I was at the TIFF Movie Cafe with Prof. Ando.
READ MORE »

The TPG meetings from the 26th to 28th of Oct went by in a blur. I think it's much more fruitful than the one two years ago, I got to meet more people, got more input for the project, it was a very educational experience. No photos though, just a photo of Ming Jin and I, with Dustin Nguyen. In between meetings.
READ MORE »

26th of Oct. The 1st screening of INHALATION and THE TIGER FACTORY. The day began with the TPG (Tokyo Project Gathering) reception. Just like two years ago, Ming Jin and I had a project called 'THE BOOK KEEPER' in the TPG. Some changes were made since then, for example, the opening reception was held on the TIFF Movie Cafe instead of the ballroom in the 49th floor of Roppongi Hills, and that meetings of TPG had been integrated into TIFFCOM (at the 40th floor) instead of being in a separate space at the 49th floor. I elaborated a lot more about the TPG in this blog two years ago . Thai director Pen-ek Ratanaruang has a new project called Headshot.
READ MORE »

It's not everyday that you get to plug your own SHORT FILM (!!) at the Cannes Film Festival. But I did just that with INHALATION, back in May, during the press conference of THE TIGER FACTORY, when I was asked about it by Jeremy Segay the moderator and programmer.
READ MORE »

Had been shutting myself away from the rest of the world working on a new film treatment. Then, my comp died. I ended up doing the writing at Saizerya (a Japanese "family restaurant" similar to Denny's) in the past few hours. Will continue writing that. But for now, take a look at a video from THE TIGER FACTORY press conference at the Cannes Film Festival on the 21st of May, 2001, just before its official screening. Jeremy Segay moderated the Q and A, those present were Ming Jin (the producer-writer-director), me (the producer-writer-editor) and Moon Lai (or Fooi Mun, the lead actress).
READ MORE »

Spent the entire last week trying to finish up my Master's Thesis. It's due end of this month, but I had other things to do, so had to get it done earlier. I succeeded. Now, on with my penultimate post for the Cannes trip.
READ MORE »

I've returned to Tokyo this morning. It's been an enjoyable trip in Cannes. The reception for THE TIGER FACTORY was very warm, there was a nice standing ovation, but I'll get to that later.
READ MORE »

This teaser was also posted on Twitch and the official Directors' Fortnight website . Here's some info of the film:
READ MORE »

Preparing THE TIGER FACTORY for Cannes

The past few days went by in an even quicker blur. Day became night, night became day, sometimes I didn't sleep, sometimes a nap is treated as a sleep, I have lost all sense of time. I went back to Malaysia for 3 nights to:
READ MORE »

Behind a scene of THE TIGER FACTORY

This was shot on the 6th of March (my birthday!), during the 4th day of THE TIGER FACTORY shoot. Pang the Sound Guy had to play a minor role, so it was up to the director Woo Ming Jin himself to carry the boom mic. Making films in Malaysia, you kinda have to do everything. (another 2 hours before I head off to Narita Airport)
READ MORE »
More posts